The Kind of Face You SLASH!: Day 3 - We Mean What You Read 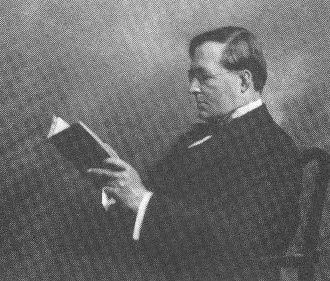 Using the "about the author" page from my Penguin Classics edition of M. R. James's The Haunted Dolls' House and Other Ghost Stories as my only reference (volume two of his complete horror stories), I am able to discover that, in addition to writing the fiction for which he is now famous, James can also boast the following accomplishments: he was a fellow, dean, tutor and provost at various times in his life at King's College, Cambridge; he was the director of the Fitzwilliam Museum in Cambridge; he became the provost at Eton college in 1918, a post he heald until his death in 1936; he wrote several works of scholarship over the years, covering topics such as "biblical apocrypha" and medieval manuscripts; he also wrote an autobiography called Eton and King's, which was published in 1926.

Reading that (and taking special note of the title of his autobiography), you might get the sense that the ghost stories whose fame keeps his name alive, were maybe not the most important thing in James's life. And you'd be right. My understanding of how James got into the ghost story business is that he was an enthusiastic participant in the English tradition of telling ghost stories to family and friends during the Christmas season. Having a fine imagination, and being a skilled writer, James turned out to be especially good at this, and so he took to writing down these stories, and eventually publishing them.
And he did indeed write many very good stories. I commend to your attention, among others, "Casting the Runes", "The Ash-Tree" and "The Mezzotint". But I would also suggest that you don't read too many of these stories at once, because I think you will find, as I did last year, that James's frivolous dealings with the horror genre might become apparent to you. If you're not especially invested in the genre, this probably won't bother you too much, but since I clearly am, I find the sameness of some of these stories, as well as a tendency to tie things up (not always too neatly, thankfully) through expository dialogue to be pretty frustrating. If only he'd cared more! He was so good at this, up to a point, that just a little more emotional investment in these stories could have...what, made them immortal? They already are, and many, many horror enthusiasts consider them among the best stories the genre has ever produced. And I suppose they are. I just wish they'd been written by someone who genuinely considered himself a horror writer.
For today's selections, I have picked James's "The Haunted Dolls' House", as well as another story by a different writer who I will get to shortly. The James story is about exactly what it claims: a man named Chittenden has in his possession a dolls' house of extraordinary quality, which he sells at a very low price -- so low that the buyer would have been suspicious had he not believed he was outsmarting the seller -- to a man named Mr. Dillet. After selling the dolls' house, Mr. Chittenden speaks to his wife:

"It's gone," he said."
"Thank God for that!" said Mrs. Chittenden, putting down the teapot. "Mr. Dillet, was it?"
"Yes, it was."
"Well, I'd sooner it was him than another."
"Oh, I don't know; he ain't a bad feller, my dear."
"Maybe not, but in my opinion he'd be none the worse for a bit of a shake up."
And a shake up is what Mr. Dillet has in store for him, because that night, after he's set up the dolls' house and gone to sleep, he's awoken by strange going's-on within the miniature house. As Mr. Dillet watches, he notices the dolls, who now look simply like tiny people, move about and enact some rather dark schemes. Not all of what goes on there is clear to Mr. Dillet, but it seems pretty clear that a murder, and possibly more than one, has taken place. The next morning, Mr. Dillet commiserates with Mr. Chittenden, does a little investigating, finds out some things, some spoilers happen, and that's it.
If I seem to be arrogantly dismissing a writer who is considered one of the giants of the horror genre, I really don't mean to be. James had great gifts as a writer: he was economical, funny, imaginative, and gave his stories a great sense of strangeness. The problem is simply that by the end of many of his stories, I got the feeling that he would rather be doing other things. He had a full life outside of this genre. This was a hobby to him. He was an expert hobbyist, but a hobbyist nonetheless.
One of his many devotee's is a writer considered to be one of the very best in modern horror, a Liverpudlian named Ramsey Campbell. In the story notes to his collection Waking Nightmares, Campbell talks about being asked to write a traditional ghost story for an anthology:

Now, I was becoming convinced (and still am) that many of today's horror writers are unaware of the traditions of their field. Indeed, one course on writing horror advises its students to avoid learning from the old masters, as if there aren't already too many writers who appear to have read no fiction older than themselves. I therefore welcomed the chance to demonstrate that the techniques employed by M. R. James are as valid as ever.
I'd like to know the name of the person running the course he talks about, so I can punch that person in the stomach. Because, despite my reservations about M. R. James, he was gifted, and much better, in many ways, than the vast majority of horror writers who have succeeded him, especially those working today. Campbell uses the word "techniques", and I'm not sure I can

describe this as that, but James at his best (which "The Haunted Dolls' House" isn't) is able to draw the reader along with little mysterious touches to his stories that build both in size and strangeness until the reveal out-bizarres everything that went before, and, hopefully, leaves the reader more chilled by the solution than he was the build-up. Nowadays, the "solution" to horror stories and novels renders all that build-up irrelevent, because the point to which it was all leading is boring, and rote, and a waste of time.
The story Campbell ended up with is called "The Guide", and it's about an old man named Kew who is vacationing in the Suffolk and Norfolk area of England with his daughter and her family. Kew, as it happens, is a great fan of M. R. James, and he spends a fair chunk of his vacation trying to locate a collection of his ghost stories. Oddly enough, he does find a book by James, but it turns out to be a guidebook James wrote to the very area in which Kew is vacationing (James really did write such a book). Seeing this as better than nothing, Kew buys the book, only to find mysterious scribbles in the book's margines:
churchyard on the cliff -- my old parish.
and

There was a man so versed in the black arts that he was able to bide his time until the elements should open his grave...
The guidebook is a very old edition, and Kew begins to wonder if the scribbles, which he gradually finds it easier to decipher, might not have been made by James himself, perhaps as notes to a story he never completed. Using the guidebook, and the clues in the notes, Kew gets his family to drop him off in the area where he believes the aforementioned "churchyard on the cliff" to be located. He meets an innkeeper, finds the church, someone who might be a priest, and something else entirely.
The ending to this story is very unnerving, and I think this is one of the most successful stories I've read by Campbell. I've read a handful of his stories, as well as three novels, and I've always had a hard time with him, because to further my frustrations with this genre, Campbell -- who is incredibly smart about horror -- is twice as sincere about this kind of fiction than James, while at the same time being half the writer. For example, am I the only person who finds this passage more than a little sloppy?

It seemed he had no choice, for his body was audibly withering, a process which dragged his head down to show him what had become of him. Barely in time, his cry awakened him.
Him him him. His his. That whole thing needs to be recast, I think. Or this:

...he let the book fall on the grass, where it fell open at the scribbled page.
Why not, at least, "dropped" instead of "fell"? And I don't think I'm picking nits, here.
I'll get into Campbell more in a day or two. I'll be finished with his novel The Face That Must Die sometime this weekend, and with that novel, whatever I may finally think of it (to be fair, it's very intriguing so far) I will have made the leap into the modern age of horror fiction. And we'll see how that goes.
Posted by bill r. at 1:04 PM

His prose, written by him, had the effect that it, the prose he wrote and typed himself, felt redundant and his writing helped it along.

I remember one time I fell and the sandwich I was carrying fell out of my hand and when it hit the ground it fell open to reveal I had forgot to put anything between the bread. I fell about with laughter, as I fell all over the place.

I know, right!? Campbell is not an untalented writer. He's also not a big enough name that people are afraid to edit him. So how does that stuff get through? How can that not jar in his ear?

I am myself increasingly finding myself enjoying this series, bill.

Thank you very much, Rick. Sorry I didn't have anything up yesterday, but I'll at least have something up tonight. There's an off-chance I'll have two posts tonight, but I was travelling this weekend, which made things tight.