The Kind of Face You SLASH!!: Day 9 - Stoker Was Kept Busy With the Claret

Patrick McGrath is not dissimilar to Ian McEwan. As I said in my last post, McEwan's early work (what I've read of it), tended to be dark and weird, and often skirted with the idea of becoming part of the horror genre. Occasionally, it went right ahead and did so. Since then, McEwan has decided to mostly leave that style behind him, and concentrate on being good at writing other things.

Patrick McGrath's early fiction, however, was just flat out horror. It was maybe a bit sardonic about the whole situation, even a bit knowing, but it still was what it was, and his collection Blood and Water and Other Stories is a terrific gathering of the kind of fiction McGrath would later term "New Gothic", which I can only assume involves modern writers such as McGrath bringing the style and tone of Gothic fiction to the modern era. I don't know if "New Gothic" was supposed to be a movement and never took hold, but I do know that one of the writers who used to work in that arena and has since moved on is McGrath himself. It's been a very gradual process. His first four novels -- The Grotesque, Spider, Dr. Haggard's Disease, and Asylum -- are pretty firmly Gothic in tone and story (they're also all very good, with Spider and Dr. Haggard's Disease being particularly strong, and, in the case of Dr. Haggard's, particularly nasty).

His more recent work -- Martha Peake, Port Mungo, and Trauma -- however, has drifted into...okay, I haven't read those books yet. But I'm led to understand that Peake is a historical novel, and the latter two are, if they must be labeled at all, more in the realm of "psychological thriller" than "Gothic". What caused this change in his work? I have no idea. I'm just pretending to know what I'm talking about. Remember, I don't even know if any change has occurred.

Anyway, McGrath almost had no choice but to be a writer of the sort of fiction with which he made his name. His father was the medical superintendent at an English mental institution called Broadmoor, and that's where McGrath grew up. I think it's safe to say that many of the patients there would be considered delusional, and the same can be said for the narrator of pretty much every piece of fiction by McGrath I've ever read. Delusional narrators are his subject. Often, his narrators will tell the story as though they were outside events they describe, and for a while we'll believe them, but certain slips, or odd phrases, or something will begin to clue the reader in that this man or woman who is supposedly just letting us know what happened is actually central to the story 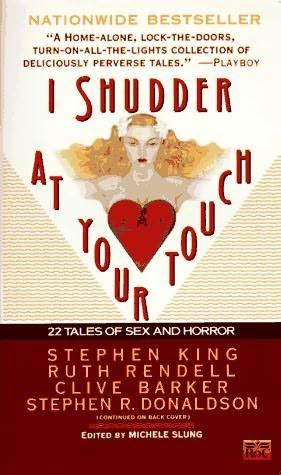 , and their presence usually will have darkened the lives of everyone else involved.

In his short story "Cleave the Vampire, or, A Gothic Pastorale" (found not, by the way, in Blood and Water and Other Stories, but rather in a horror anthology called I Shudder at Your Touch, edited by Michele Slung), the reader's uncertainty about the narrator ends no later than three pages in. Our narrator is Lady Hock (she has a name!), of Wallop Hall. She is married to a man named Harry, has a son who plays cricket named Charles, and a daugher named Hilary, whom Lady Hock is concerned will marry the wrong kind of man. Lady Hock is also on some sort of medication. It's never specified what she's on, but characters throughout the story implore her to take them. We can easily say why, because on page three, Lady Hock is chatting with her friend Olive (who has just asked Lady Hock to take her pills), when this happens:

And then the most peculiar thing happened: I could suddenly see hundreds of worms crawling in and out of Olive's head! Her skin had gone an awful, yellow-green color, and little clotted lumps of rotting flesh began to drip from her bones and into her knitting. The smell was foul. It only lasted a moment, I'm happy to say, but what a very nasty moment it was. And then, thank God, Harry arrived.

From this point on, clearly nothing that Lady Hock says can be trusted. Just as clearly, that doesn't matter, because this is probably McGrath's most straight-forwardly funny work that I've read.

Lady Hock's delusions become worse when Charles invites a cricket team to stay at Wallop Hall. Lady Hock's initial objection to this is simply that her daughter Hilary will get into trouble with one or more of them, but, after the team has arrived, she becomes even more concerned when she decides that one of the players, a young man named Cleave, is a vampire. After this, Lady Hock's behavior becomes a bit alarming.

As I said, this is McGrath is his funny mode, which is a mode he's not often in, and I enjoyed it very much. I don't know that I ever laughed out loud, but I rarely do while reading. Kingsley Amis and P. G. Wodehouse break through that particular barrier of mine, but few others. But McGrath's story is a black, well-written lark, and for that -- and for giving his narrator a name -- I'm grateful. Generally, I prefer my horror fiction to be pretty brooding and laugh-free, because so much of it these days is -- intentionally or otherwise -- a joke, and I'm sick of it. But when you read nothing but the brooding laugh-free stuff for nine days straight (technically, ten) with another three weeks of it staring you in the face, a story like "Cleave the Vampire" can give you a boost. Had I known what it was before I picked it up, I might not have read it (this is serious, you know!), but now I'm glad I did. I could have done without the butler being named "Stoker", but what can you do? We're none of us perfect.

I like that you mention "lauging out loud" while reading, b/c at dinner tonight, a friend told me a moment she screamed out loud while reading a book. This really surprised me. Has that ever happened to you, as well?

No. In fact, I wouldn't have thought it possible.

I'm just pretending to know what I'm talking about.

That would be a great slogan for your blog... and I don't mean that as a slight but rather I doubt there's one among us who doesn't feel that way. If you write as much as we do, even if you're very well-read and clever, there comes a point (or two) where you can definitely sense the cart pulling the horse.

This series makes me kind of depressed because I have so little time to read for pleasure these days. I inch through the books I'm interested in with 2 and 3 week gaps between reading sessions and that's so wrong. Maybe if I spent less time on the Internet.

Nah, that can't be the answer.