The Kind of Face You SLASH!: Day 2 - Have You Found the Yellow Sign?

Robert W. Chambers is remembered -- and I use that word very loosely -- for the five stories that made up his 1895 collection titled The King in Yellow. My 2004 edition of this book is called The King in Yellow and Other Horror Stories, which is misleading in at least two different ways, in that there is no story in the book called "The King in Yellow", and the stories included here beyond the original five are, I'm told, not all part of the horror genre. I'm taking the second part of this on faith, though, because I've only read two of the stories, both from that original group of five: "The Yellow Sign", which I chose because it's famous, as far as Chambers's work goes; and "In the Court of the Dragon", which I chose because it's short, and the title intrigued me.

Judging by these two stories, Chambers was a very talented writer who deserves a bigger audience these days. He's similar to Lovecraft -- at least these horror stories are -- because where Lovecraft

wrote about a book called The Necronomicon by the mad monk Abdul Al-hazred, which could be used to summon the Great Old Ones, Chambers has his own ominous and mysterious book called, that's right, The King in Yellow. The exact purpose of this book is unclear from my reading so far, and to me that's a plus.

In "The Yellow Sign", a painter named Scott, who lives in New York and has a platonic relationship with his favorite nude model, Tessie, notices one morning a disturbingly soft and pale looking man standing guard outside of a church located across from Scott's apartment. In the course of the story, Scott will learn to his dismay that Tessie has fallen in love with him, that the church's pale watchman lost a finger apparently more easily than one would think possible, and that both he and Tessie have started seeing this man in their dreams, dreams that revolve around waking death and funerals.When the book The King in Yellow makes its appearance in the story, it does so with no context, at least for the reader, but Scott knows the book:

"The King in Yellow."

I was dumbfounded. Who had placed it there? How came it in my rooms? I had long ago decided that I should never open that book, and nothing on earth could have persuaded me to buy it. Fearful lest curiosity might tempt me to open it, I had never even looked at it in bookstores. If I ever had had any curiosity to read it, the awful tragedy of young Castaigne, whom I knew, prevented me from exploring its wicked pages.

Again, this is the first the reader knows of this horrible book, and we've never heard of Castaigne, either.

It is my belief that, by and large, the less the reader learns about the frightening goings-on in a given horror story, the more effective that story is going to be. I was left to imagine 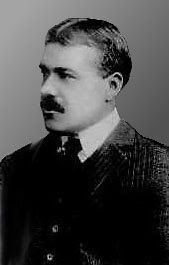 a sort of vague history, or meaning, or something, about this book, and about the King in Yellow himself. I couldn't explain that history to you, because it's vague, but it heightened the sense of dread considerably. This is why horror works best in the short story form, and the ignorance of this idea is at least one of the reasons why horror novels have gotten so ridiculously bloated over the years.

"In the Court of the Dragon" is a very short story, and a bit more standard-issue than "The Yellow Sign". It involves a nameless narrator who, while in church one day, appears to be the only person in the congregation to hear the church's organ player switch from traditional playing to a kind of mad discordance. This leads him out of the church, where he begins to see a man, who he believes means him harm, at every turn. We learn that our narrator has a dark past, and that elements from the previous story are at play here, as well.

Two things about this story: the fact that the two stories are unconnected except for this one element, which happens to provide the horror of the story (no fair guessing what this element is), indicates that Chambers had an ambition to link his fiction similar to Lovecraft's; and, the fact that "In the Court of the Dragon" takes place in Paris, and "The Yellow Sign" takes place in New York, implies that none of us are safe...

A curious thing about Chambers is that these five stories make up almost his entire output in the horror genre. He was evidently an extremely prolific writer, and, in his day, a bestselling one. I don't know anything about him beyond that, but it somehow makes these stories feel creepier, as though he were compelled to get this dark vision out of him before he could return to his regular work.

This sounds really intriguing to me, and since you say it is relatively short, I think I may search this out. (I know saying "since it is short" sounds lame, but always put down longer fiction and end up having to start over again).

Oh, I don't know. It's still in print, and you can get the same edition I have for between $13 and $15 on Amazon. Finding something like this used, or at a store that sells remaindered books, seems very unlikely to me, but it's still easy to find.

Also, I don't know what you consider short, but my edition is 286 pages -- which I'd call slightly shorter than average in
length -- although that includes many stories unrealted to the original five "King in Yellow" stories. Those stories only take up about a third of the book.

I think you're right -- horror does work best as short stories. It's much more difficult to maintain the mystery and suspense in a longer form. Great post.