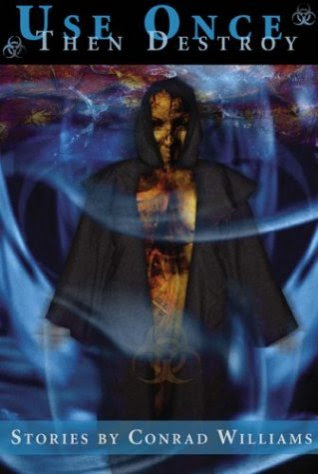 Bookstores should really segregate their genres. I know that, as a fan and defender of genre fiction, I should be pushing for full integration, so that perhaps one day horror and crime fiction will be as respected as the work Candace Bushnell and Nicholas Evans. But most bookstores separate the likes of Mary Shelley from the shelves that house those literary titans, and I'm glad, because otherwise I may never have heard of Conrad Williams.

Who is Conrad Williams, you ask? I have no idea, really. But one day I was browsing through the horror section of my local Borders, looking for something, anything, that seemed new and interesting. I was striking out, but then, when I got towards the end of the section, I found a book called The Unblemished, written by Conrad Williams. According to the pages of blurbs inside, writers I respected, like Peter Straub, were simply nuts for the guy. One critic used the word "tragic" to describe one of Williams's novels. "Tragic" is a word that is rarely used these days to describe horror, and I was intrigued, so I bought the book.

I haven't read it yet, though, so don't get your hopes up. I am reading another Williams novel right now, however, one called London Revenant, but because that's moving more slowly than I'd like, and because I'm finding it harder and harder to find stuff to read for this project, and I'm kinda freaking out about it, and really, guys, I'm not sure this was such a good idea, writing about horror every goddamn day for a whole month, I mean, if I just stopped, and said "October's over, losers!" what, really, could you do to me? Nothing. In this matter, I am untouchable. In this, you are at my mercy. For you see, today I have...

Wait, what was I talking about? Oh, right. So, as a kind of interim post, until I've finished reading London Revenant, I'd like to talk about two stories from Williams's story collection, which is called Use Once, Then Destroy.

The first is called "The Owl". As often as not, I choose the stories I read for this project based on the title, and for some reason the word "owl" strikes me as very evocative and fitting for a horror story. Curious to know how much this story actually had to do with real, physical owls, I began reading the story, which is about an English couple named Ian and Molly. They haven't been married all that long, but they're expecting a child, and have just moved to a country house in rural France. Right at the beginning of the story, they do indeed find a dead owl in their barn. Owls are plentiful around here, they are told, as are pretty wicked storms. This latter detail pleases Ian, who finds storms fascinating and thrilling. Very little else seems to please him, however. He's a bit of a downer, and he and Molly argue frequently. As the story goes on, they do so with increasing bitterness. Ian tends to be at fault, coming off as a selfish killjoy, when his only real problem seems to be that he speaks without thinking. This is getting a bit old, though, and even he knows it:

He found her sitting outside a cafe on the Cours Reverseaux. She sipping a latte and flicking through a magazine at speed. Not reading anything, hardly looking at the pictures, just needing something to do with her fingers to deal with her anger. Her left foot bounced against her right. He watched it. He watched the sun flingtin on the silver ring that encircled her little toe, a present he had given her on their honeymoon in Bali.

"I'm sorry," he said, but he had uttered the words too often for it to have any meaning.

And as their arguments become more heated, and the silence following them more prolonged, little oddities enter their life to make everything seem more sinister, such as the weird cut-outs of badly wounded people lining the roads (these are fantomes, Molly explains, and they warn of dangerous roads). Or the very alarming, owlish figure seen by Ian in the sky during a massive storm. This is another story that invites the reader to decide for themselves if the supernatural elements are real or not. In this case, I don't think they are, because those elements are so random and seemingly unrelated that I think something else is going on here.

Williams has a tendency to overseason his prose, as far as I'm concerned, and he overloads his sentences when he should think about occasionally unbuderning them. But I'd rather that than the alternative, someone whose style is of the "her fangs glistened in the moonlight" variety. This is a good story that builds a nice sense of dread, and the ending is strong: muted in its detail and horrific in its implications.

The second story, "The Night Before", is...not a horror story. There's a ghost in it, but it's really more of a melancholy fantasy-drama, about a guy having a hard time dealing with the fact that the woman he loves is marrying another man. And it's fine, I suppose, but it's also very short, and therefore Williams doesn't allow the reader much time to get invested in anything. Plus, the ghost seems a little out of place. Maybe I'm overthinking it.

But the point is, it's not a horror story, and I'm going to use that fact as an excuse to cut this post short. Tomorrow, maybe I'll read some Alice Munro stories, then act surprised when I discover they're not about vampires. And then I can say, "Well, sorry, they're not horror stories. What do you want me to do? I can't write about them!"
Posted by bill r. at 7:11 PM

I know how you feel ... promising to write about vampire flicks every day wasn't exactly the brightest thing I ever did. Even though, right there in the first post, I said I might not post every day, I still feel obligated.

Yeah. Dumb move, Bill. The thing is, I don't think I actually ever said I would post every day, but I'm kind of privately trying to hold myself to that regimen. I'm already a day behind, but if I buckle down this weekend I can catch up.