The Kind of Face You SLASH!!: Day 23 - It is Beyond Even the Forgiveness of God 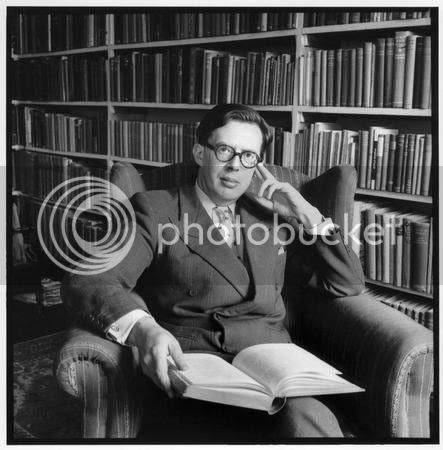 When I started this project, there were two writers that I knew I had to find time to write about, because neither of them is very well known -- even, I suspect these days, among horror fans -- and both write what I consider to be the finest horror fiction since, oh, I don't know...let's go all the way back to Poe. One of those writers is Thomas Ligotti, who I've already written about. The other is Robert Aickman.

Aickman was an Englishman who published his "strange stories" from the late 50s through the very early 80s (he died in 1981). His bizarre, witty, erudite and completely original fiction has influenced writers such as Ramsey Campbell, but, as Peter Straub says in his introduction to the "best of Aickman" collection, The Wine-Dark Sea, which Straub put together in 1988:

His originality, conscious and instinctive at once, was so entire that although he has provided us with a virtual model of what the "strange story" should be, if anyone tried to write to its specifications, the result would be nothing more than imitative.

You sure got that right, Peter Straub. I've never read any writer of any kind quite like Robert Aickman. I'm going to dive right into a discussion of the first of two Aickman stories (which I picked, by the way, not from The Wine-Dark Sea, but from another collection called Painted Devils)I read for this post, and explain the above along the way.

The first story is called "My Poor Friend", and it's about a kind of grassroots movement to bring localized, water-powered electricity to London. You heard me. Our narrator, we learn in bits and pieces throughout the story, possesses the almost satirically English name of Jocelyn Grover-Stacey. Grover-Stacey, as our story begins, has been bouncing from one job to another, dissatisfied with the progress each employer had been making with bringing water-generated electricity to England. He decides to hitch his wagon to man named Wycliff Bessemer, who seems to have the same genuinie desire for this outcome as he does, and has put together a "Society" to achieve it.

In his position as Bessemer's administrative secretary, Grover-Stacey gives presentations around the city, trying to drum up support. At a party where he's giving one of these speeches, he meets a man named Walter Enright. Enright is a member of Parliament, and Grover-Stacey strikes up a personal and professional relationship with him. Grover-Stacey believes that Enright is the man -- and Enright ensures him that he is correct in this -- to push their cause through Parliament. Enright seems to be a down-to-earth and honest man, with a comfortable air of cynicism about him. And, by the way, he smokes very strange cigarettes:

From his tight waistcoat, he produced a small, cylindrical, gold lighter from wich a tiny green flame erupted upon silent pressure at the base. When he put the cigarette in his mouth, it was as if it had been put between the lips of a wooden figure. Moreover, the cigarette, glowing more yellow than red, apparently gave off no smoke. It was, no doubt, a parliamentary cigarette. Enright's blue eyes seemed to become more limpid as he smoked it.

Enright informs Grover-Stacey that the cigarettes are a special blend, and not everyone likes them. Grover-Stacey doesn't smoke, so he never has to worry about that.

After their initial meeting, Enright invites Grover-Stacey to his home to discuss business. While there, Enright feels it's important to inform him that there are some potential drawbacks to their partnership -- not for Enright, but for Grover-Stacey. These have to do with certain private scandals. For one, Enright's wife has recently left him, though, he claims, not for good. There's also the matter of their two children. Enright says...:

"One was bad enough, but two! It was enough to drive any woman clean our of her mind, let alone being married to me as well. Look at that."

Here, Enright picks up a wooden toy train, covered with teethmarks, and shows it to Grover-Stacey.

It was, as you can see, difficult to think of anything to say.

"You mean there's something unusual about the children?"

"They're not human at all. They ought not to live. But my wife naturally doesn't see it like that."

The two men's partnership remains firm, however, and Grover-Stacey becomes more involved with Parliamentary politics in his drive to push the cause forward.

So. There's your set-up, for lack of a better term. On one hand, you have a story about the British Parliament, its beauracracy and odd personalities, and on the other hand you have this bizarre other story, used almost as shading for most of the length of "My Poor Friend", about a strange man and his strange family problems.

It's very typical to finish an Aickman story and not really have any idea of what has just happened. This is deliberate, and not uncommon among certain kinds of "weird" artists. David Lynch, of course, is known for this. The point in his films -- the ones that work this way at least -- is to disorient the viewer and disturb them with sounds and images that are unnerving in ways you can't quite pinpoint, and to do so at a rate that can almost be assaultive. With Lynch, you're off-balance almost from the beginning.

But in "My Poor Friend", the strangeness is almost buried as you read about Grover-Stacey's adventures through, and views of, Parliamentary politics. And I would argue that this way of presenting the bizarre is far more unsettling to the audience than Lynch's way (and I say that as a fan of Lynch). Because what in the hell is going on here?? What are these children?? Every so often, this element of the story will make its presence known, and then withdraw again. And you never know what in the world any of it means.

Are you supposed to be clueless? In Dark Forces, a massive and indespinsable horror anthology from 198o, editor Kirby McCauley says this in his introduction to Aickman's story "Mark Ingestre: The Customer's Tale":

Aickman rarely explains the the mysterious happening in his stories, but rather haunts his reader by a skillful blending of the supernatural with odd aspects of the modern world or allegory.

And elsewhere I've read Aickman reffered to as a symbolist. I've even seen him refer to himself that way. So in "My Poor Friend", is the supernatural a symbol for something else? An allegory? Does the juxtaposition of the bizarre with British Parliament mean something specific? Aickman comments wryly on Parliament and general politics throughout the story, so I'm not sure what point beyond those cynical observations he would want to make through allegory.

But maybe I'm not a very close reader. Frankly, that's a concern I've had about myself for years. Still, if I knew that there was some direct allegorical connection that Aickman was making between the seemingly disparate strands of "My Poor Friend", would the story stick with me the same way? Would I still turn it over and over in my head, as I do now, if someone "explained" it to me? Or, when opening up Painted Devils to read another story, would my eye fall on the title "My Poor Friend" and make me think, "Oh, that's the story where the supernatural represents the following..."

I'm uncomfortable quoting this book, because I didn't like it, but in James Hynes's novel The Lecturer's Tale, a character describes literature this way:

A literary work is any work of imaginitive writing – prose, poetry, or drama – that is inherently more interesting – rich, complex, mysterious – than anything that could be said about it.

Well, exactly. For me, that is why Aickman works, and that is why "My Poor Friend" will stay with me. If anybody out there wants to explain to me what the story means, please, keep it to yourself.

The other story I read by Aickman is called "The Waiting Room", and, as my dad would say, it feels like he wrote in on his lunch break. For one thing, it's about a third as long as most of his fiction -- the average length of an Aickman story is about thirty pages; "The Waiting Room" is eleven. More importantly, Aickman throws everything I've just been writing about out the window by explaining everything. And the explanation is a rather pedestrian one, at that. The story -- which is about a man named Pendlebury who misses his train home and has to sleep in a railroad office adjoining the station's deserted waiting room -- is fine, but it doesn't have the thrill of the bizarre that most of his fiction has. It would be a fine ghost story to tell around a campfire, nothing more.

Wow, way to fizzle out at the end there! I should have reversed the order of this discussion. Oh well. I would like to point out to anyone who may have been convinced by this post to seek out books by Aickman that most of his work is out of print, and used copies are very expensive. However, the three books that I have -- The Wine-Dark Sea, Painted Devils, and Cold Hand in Mine -- are all relatively easy to come by on-line and in used bookstores, and they're all usually reasonably priced. And you should read him.
Posted by bill r. at 10:20 AM

Aickman seems like a fine writer. The waistcoat quote, in particular, has a rhythm that is very appealing. A fine post.

Thanks, Rick. I don't think I'm great at choosing quotes (I should probably mark pages I want to quote from), but I could have chosen just about any passage from Aickman and you would have been just as impressed, if not more so. I hope you check him out sometimes. You'll thank me later.