The Kind of Face You SLASH!!: Day 26 - Entertainment for a Monster

Here's how the editors of Playboy introduce Ray Russell's story "Sardonicus" in the anthology The Playboy Book of Horror and the Supernatural:

Russell's Gothic canon is unique in contemporary fiction. Not since the Romantic novelists of the 19th Century has there been a writer with quite his panache, eloquence and mastery of the art of terror. He is a symphonic writer, unafraid of big emotions and stunning effects, lavishly orchestrated.

Man, the editors of Playboy sure know how to sell a short story, don't they? But wait...according to Kim Newman and Stephen Jones, editors of Horror: Another 100 Best Books (one of those 100 being the Playboy anthology) there was only one editor for the book, and his name was Ray Russell. So I guess what I should have said was, "Man, Ray Russell sure knew how to shamelessly promote himself, didn't he?" (There are actually two Russell stories in this anthology, and his introduction to the second story, "Comet Wine", hilariously begins: "Ray Russell's work is 'Staggering, wholly convincing, filled with the dark powers of life and minds,' according to the tough-minded Virginia Kirkus book review bulletin".)

"Sardonicus" -- a long-ish short story, at 40 pages -- is my selection today, and, to be fair Russell wasn't the only person to have such a high opinion of it. Russell actually was a highly respected horror writer in his time (mainly the 1960s and 70s), and "Sardonicus" was widely anthologized. It was also turned into a famous film by William Castle in 1961, called Mr. Sardonicus (I haven't seen the film, although it's on TCM this Thursday, so I can correct that soon. Still, the more films I admit to not having seen, and the more books and stories I admit to not having read, the more I think I'm not very good at Knowing a Lot About Horror).

Though written in the middle of the 20th Century, "Sardonicus" is told in the style of a 19th Century Gothic thriller. It's about Sir Robert Cargrave, a highly respected physician who specializes in muscle paralysis. One morning, he receives a letter from Maude Sardonicus, who 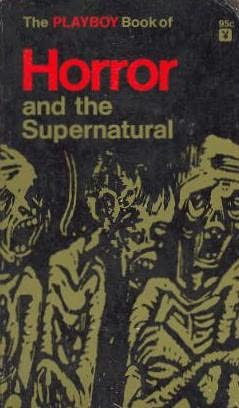 Cargrave once knew (and secretly loved) as Maude Randall, inviting him to visit her and her husband in Bohemia. Cargrave feels that he's in need of a vacation, and he'd very much like to reacquaint himself with Maude, so he hastily agrees and makes the journey as soon as he can.

When he meets Maude, she's just as beautiful as he remembered her, but her once bright and lively personality has had a shadow cast over it. He begins to understand why when he meets her husband, Mr. Sardonicus:

...the gentelman before me was the victim of some terrible affliction that had caused his lips to be pulled perpetually apart from each other, baring his teeth in a continuous ghastly smile. It was the same humourless grin I had seen once before: on the face of a person in the last throes of lockjaw. We physicians have a name for that chilling grimace, a Latin name, and as it entered my mind, it seemed to dispel yet another mystery, for the term we use to describe the lockjaw smile is: Risus sardonicus.

Soon enough, Cargrave learns a couple of important things: one is that "Sardonicus" is not the man's real name. His real name is Marek Boleslawski. As a young man, he raided his newly deceased father's grave to liberate a winning lottery ticket, which he subsequently used to start his fortune. But upon digging up his father, he saw that the corpse's face had twisted into an alarming rictus. The shock, horror (and, probably, guilt over what he was doing) caused Marek's own face to twist and freeze into a mad and repellent grin, which he's suffered with ever since. His inability to pronounce "Boleslawski" due to his new deformity lead him, with bitter and intentional irony, to choose "Sardonicus as his new surname (the problem here, though, is that Sardonicus is an extremlely verbal character, and at no point in the story does he avoid plosives or...uh...whatever "M" sounds are called).

The other thing Cargrave learns is that Sardonicus is a monster. He persuaded Maude to invite Cargrave because, predictably, he wanted Cargrave to cure him, but he eventually threatens both Maude and Cargrave by informing them that should Cargrave refuse, or try and fail, to cure him, a quite horrible form of punishment will rain down upon Maude. Filled with rage and disgust, Cargrave has no choice but to agree.

Ray Russell may have been an arrogant little so-and-so, but this really is a damn good story. Russell occasionally overdoes the Victorian Gothic style, what with his use of words like "thither" and "yestereve", but by and large he gets it right, and "Sardonicus" ends up being an awfully nice -- however unintentional, on my part -- companion to Stevenson's The Strange Case of Dr. Jekyll and Mr. Hyde. The thematic similiarites are strong enough between the two that Russell may have been primarily inspired by Stevenson's novella, but "Sardonicus" is its own crazy entity. And yes, it's kind of a loony story, but he makes it work. You buy into it (even that thing about Marek stealing his dead dad's lottery ticket, which I admit sounds absurd when described glibly, as I did, works perfectly fine, fleshed out and in context). And Mr. Sardonicus himself is a great creation, a memorably, hateful and creepy villain. It would be selfish to ask for more than that.

Russell was apparently not very prolific -- I can only find three titles to his name -- but on the basis of this story I'll be happy to seek out the rest. And by the way, according to Russell's gushing introduction, "Comet Wine" is a sequel of sorts to "Sardonicus", in that the hero is, once again, Sir Robert Cargrave. That's all I need to know.
Posted by bill r. at 7:17 PM