The Kind of Face You SLASH!!: Day 30 - Very Far from the World of Meaning

Not sure what I wanted to read today, I was in my bedroom, searching through all the books I'd set aside as possible options for this month. Nothing was jumping out at me, until I noticed The Stories of Paul Bowles, which I'd taken from the shelf just a few days ago, because something I'd read about it sparked my interest, and because I felt like I should have considered it for this project.

The piece I read that had sparked my interest was Terry Lamsley's brief essay in Horror: Another 100 Best Books on Bowles's collection Pages from Cold Point. This book was apparently a fairly short one, containing about six or seven stories, all of which, as you would imagine, found in the large collection of Bowles's work I'd taken down. Lamsley briefly describes each of the stories, and then says of Bowles:

He never wrote specifically for the horror genre, but many of his tales are much more strange and disturbing than those by some writers who do. One such, "Kitty", about a girl who wants to turn into a cat, was written for a children's book and rejected by the publisher as being far too gruesome. I have never come across any of his stories in a horror anthology.

Neither have I, and now that I've read a few of them, I'm as perplexed by this fact as Lamsley. I chose three of the stories Lamsley talks about, and one other that, from what I knew of it, sounded particularly suited to this project.

The first two stories are very short, and I'll breeze through them. The first one, "The Hyena" is written as a fable about a stork meeting a hyena at a watering hole. The stork has heard that if a hyena marks you with his urine, you will be forced to follow that hyena wherever her goes. The hyena notes the stork's nervousness, and claims he knows the reason. He tells the stork that the magic powers ascribed to his species are pure fiction, and he and the stork engage in a brief philosophical discussion. This parable about trust -- a description I honestly hesitate to use, because it feels reductive -- has a grotesque ending, one far more jarring in its details than even the darkest stories of its kind I've read in the past.

The next story is called "The Garden", and it deals with a man who over the years has cultivated a beautiful garden outside his home. He takes great pleasure in it, and one day, when he goes inside, his wife notices how pleased he looks and immediately assumes that he's hiding treasure from her. With the help of a local witch, she begins poisoning her husband, in the hopes of weakening his mind enough to let her ply the secret of his treasure from him. This doesn't work, there being no treasure, and he doesn't die from the poison. And this is just the beginning of an unusally rich and disturbing four pages -- it's really amazing how much impact Bowles can fit into so short a length.

The third story is "Allal", and that's the one I felt was most suited to this project. It's about a young man named Allal, who was abandoned by his mother at the hotel where she worked. When he reached a certain age, the owner of the hotel put him to work, but refused to pay him. After a while, Allal moves to town and finds a job. He is ostracized by the locals, who, because his mother abandoned him, refer to him as a "son of sin".

Allal quietly goes about his life, earning his pay, and hating everyone in town, until... 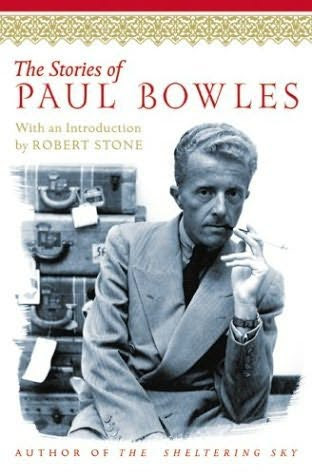 that faced the town's main square. A few paces ahead of him an old man in a white turban was trying to shift a heavy sack from one shoulder to the other. Suddenly it fell to the ground, and Allal stared as two dark forms flowed out of it and disappeared into the shadows. The old man pounced upon the sack and fastened the top of it, at the same time beginning to shout: Look out for the snakes! Help me find my snakes!

Allal helps the man and invites him to his home, where he becomes enamored of the snakes -- of one, in particular. He makes up his mind to steal this snake, which he does, after which he attempts to bind his mind and spirit to the animal. His attempts have a different result, however, and Allal finds himself winding through the town in body of the snake.

At first, the reader might assume that this is all a hallucination, because Allal has been eating kif, a kind of drug popular in the Middle East and Asia. But the ending of the story made me wonder. In any case, Bowles's fable-like style is used not only in "The Hyena", but in "The Garden" and in "Allal" as well. Because "The Garden" and "Allal" have no lesson to teach us, as we would expect a fable to do, the effect is somehow more disturbing than if Bowles wallowed in the sun-bleached darkness of these stories. I quoted Lamsley above mentioning a children's story by Bowles that was rejected for being too gruesome. I don't doubt it. Apart from fumbling with certain words and references that are particular to Middle Eastern cultures and ideas, a child would have no trouble reading and understanding either "The Garden" or "Allal" (the more openly cerebral "The Hyena", ironically, would be a much bigger challenge), but doing so would scar them.

Which brings me to the last story, called "The Delicate Prey". This story was particularly singled out by Terry Lamsley as the main reason he chose to write about Pages from Cold Point. He says:

The events [of the story], which I see no point in describing, are related as if from a very great distance, but with absolute clarity, and the reader is led into somewhere dreadful and left there.

Not a bad way of putting it, and I share his reticence about describing the events of "The Delicate Prey". I'll only say that the story is about two leather merchants, brothers, and their young nephew, and about their journey from Tabelbala to Tessalit, and what happens when they meet a friendly man in the desert. "The Delicate Prey" may be the most off-handedly disturbing story I've ever read. A telling detail, I think, of Bowles's style is that the most horrifying violence is often buried one or two sentences into a six or seven sentence paragraph. Most writers would tag such moments at the end of a paragraph as a kind of climax. For Bowles, the violence (which can be extremely harrowing) is simply another thing that happens, like the watering of camels, or the decision to move from Tabelbala to Tessalit.

I had read Bowles before this, when, in college, I had to read The Sheltering Sky, which is still his most famous work. I felt no confidence that I would like that book, or even be able to finish it, but I not only finished it, I found that I'd enjoyed it quite a bit. In other words, it wasn't what I expected. With Bowles's short fiction, I've now had that experience again. I've never read anything quite like these stories. They are merciless.
Posted by bill r. at 7:00 PM

That kind of off-hand violence is always the most disturbing kind. That's why "A Clock-work Orange" got to me when it first came out.

A Clockwork Orange has nothing on this guy.

Hey what a great way to wrap it up - because I've actually read Bowles! I read The Garden and for the life of me can't remember how it ends. But don't tell me, I'll remember. I remember the wife and assumed treasure and poison thing perfectly but only because you refreshed my memory. Anyway, I'd love to read that Kitty story and the hyena one. I think we've got this or some damn collection of his at home. I'll find out tonight and then... be out of internet contact with everyone for days. I'll send you a psychic vibe if I have it.

This isn't the end. My last post is tonight.

I really liked these stories. I hope you have a collection of his stuff, and get a chance to read "The Delicate Prey". That one knocked me for a loop, I don't mind telling you.

I may read "Kitty" tonight.