The Kind of Face You SLASH!!: Day 20 - Each Cat Was the Original Cat 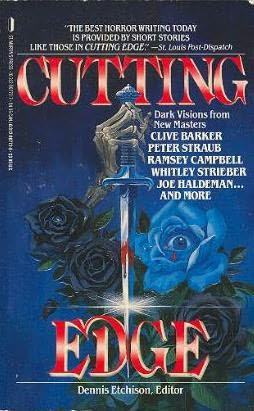 For today's post, I decided to grab, more or less at random, one of the probably dozens of horror anthologies I have in my library. From the contents, I chose two stories by writers about whom I knew nothing. And let the chips fall where they may.

The anthology is called Cutting Edge, edited by respected horror writer Dennis Etchison. That title seems to be more of an obvious pun than any statement that contained within these pages is horror's "New Guard", because judging by Etchison's introduction (which, okay, I only skimmed) the impetus behind putting the book together was merely to celebrate writers who, like Etchison, have stuck to their guns and continued to write honestly in the genre, through good times and bad. And most of the contributors, Etchison points out, write primarily in the short story form, which I'm sure I don't need to tell you is a tough way to make a living.

First up is a story called ""Muzak for Torso Murders", by Marc Laidlaw. It's about a guy named Donny. He's jobless, 35 years old, and still lives with his mother. He hates oatmeal, which his mother serves with every meal, loves The Texas Chainsaw Massacre -- the video cassette of which he hides from his mother by re-labeling it The Care Bears in the Land Without Feeling -- and really hates Muzak, that pseudo-music bastardization of (sometimes) good songs that you hear in grocery stores, and which doesn't sound like it's being played on any instrument you've ever heard before, or is even being played by human beings.

Donny is also a serial killer, who dismembers his victims and seals their bodies in concrete, inside

large kitchen and bathroom fixtures from his dad's old business, which he then loads into his truck and dumps somewhere, to be discovered later by innocent bystanders. Donny is driven to do this by, yes, Muzak. I know. Pretty weak, Marc Laidlaw. But the story actually works, for the most part. At one point, Donny thinks about filling out a job application, and Laidlaw does a nice job of showing how difficult it is for someone like him to simply live in the normal world. There are essay questions on the application, and each presents a potential workplace dilemma, and the applicant, Donny, has to supply an answer describing his solution:

"What would you do in this situation? Your superior comes into your office complaining that you scheduled her for two crucial meetings at the same time."

His neck itched with sweat; the office air-conditioning chilled him. He felt as if he had swallowed a mouthful of monosodium glutamate: throbbing spine, burning cheeks, torpid muscles.

The story -- which primarily takes place around dinner time, at home with Donny and his mother -- begins to get quite strange, and threatens to go off the rails, when his mother begins watching his secret tape. Is it The Texas Chainsaw Massacre, or is it, actually, a Care Bears movie. This was fine, until we're given the answer, and the ending shoots for a kind of Robert Bloch-ian, EC comics-esque irony, but misses.

Next is "The Man With the Hoe", by George Clayton Johnson. Johnson's name rang a bell, and according the contributor blurb, he was a prolific author of Twilight Zone scripts. The title of this story comes from a poem by Edward Markham (which was in turn inspired by a painting by Jean-Franc

ois Millet), which you can read here. The poem is known well by our main character, and stanzas are quoted throughout the story. Put broadly, the poem wonders how the future will deal with hard-working peasants when they finally tire of their oppressive existence and rise up. This strikes a chord with our man, because, we learn, he's recently lost his job, and he and his wife are facing financial disaster.

In the story, he can't sleep, and is spending his night watching the neighborhood cats cavort outside his window, and thinking strange thoughts about Africans suffering under Apartheid, as well as the place in the world of all living things:

Somewhere he had read that Man was the product of almost a hundred generations of accumulated knowledge, while each cat was the original Cat from the primeval wilderness, unaltered by time.

He hates cats, because he finds them insolent and cruel. They are free, but he is not. He tries to satisfy his rage by shooting at the cats with his slingshot; when one sneaks into his home he kills it with a flashlight. And he remembers that he gave his rifle to his cousin, as collateral for a financial loan. He wishes he had the rifle back, and decides to go get it.

Johnson's background as a writer for The Twilight Zone would lead you (okay, me) to expect a different ending than we get. As I've coincidentally been discussing with the good folks over at Cinema Styles, the two major hallmarks of that show were social commentary and twist endings; in this story, the commentary is there, but not the twist. That's actually fine, because I thought I

had the ending pegged, but I was wrong. So, that'll teach me. It's hard to know quite how to take the commentary, though, because if read a certain way, the story could be almost implicity condoning the ending, though I highly doubt that's what Johnson had in mind. He made the character a racist, too, which he may have done, at least in part, to keep people from misunderstanding his intent.

The cat stuff doesn't really work. His "battle" with the cat he eventually kills is too choreographed -- it feels like something that was written, rather than something that happened, if you get my meaning. But that's a fairly mild complaint. This is a good, thoughtful little story that doesn't rely on easy tricks or shock tactics to unnerve you. Johnson simply gets inside the head of a man who is losing his grip, and stays there until the unfortunately logical outcome.

GCJ probably is a loon and he's got good company in his buddy Richard Matheson, who consults a psychic when writing. Two peas in a freaking pod.

Yeah, Matheson has completely gone off his rocker. Have you read Hunted Past Reason? Holy shit...

I don't know if their loons or not but... hold on