H. P. Lovecraft and Algernon Blackwood were rough contemporaries -- Blackwood's writing career got started a bit before Lovecraft's -- and the former author was a great admirer of the latter. Of Blackwood, Lovecraft said:

Of the quality of Mr. Blackwood's genius there can be no dispute; for no one has ever approached the skill, seriousness, and minute fidelity with which he records the overtones of strangeness in ordingary things and experiences.

Not only that, but check out that name! Algernon Blackwood! That is friggin' nuts! With that name, Blackwood had, by my count, only two viable career choices: horror writer, or malevolent super-scientist, the kind who rides around in zeppelins, commanding his zombie army via remote control. And it was his real name, too. It's not like he was born "Sidney Loomis", and traded up to "Algernon Blackwood" when he turned eighteen. No, that was his name out of the gate -- although, regrettably, his middle name was Henry.

But anyway. Blackwood's fiction, though it has remained in print (off and on, I would imagine) since his death, never took hold in the popular psyche the way Lovecraft's did. If you want to know why exactly that is, I'm not the guy to ask, although my knee-jerk, horror-snob answer is that Blackwood was by far the better writer. I don't really know what that means, though, and I don't actually believe it. That is, I don't believe that's why Blackwood's work is obscure, compared to Lovecraft; however, I do believe -- based, admittedly, on scant evidence -- that Blackwood was a far superior writer.

Thus far, I've read one Blackwood story (finished mere minutes ago), the nearly-novella-length "The Willows". In it, an unnamed narrator and his friend, known only as "the Swede", are traveling down the Danube by kayak. Due to flooding and fierce winds, they suffer what seems

to be a mild shipwreck on a small island somewhere in East Jesus, Hungary. Their kayak is undamaged, they have plenty of provisions, and so, not at all put out, they decide to make camp on this tiny island, which is covered, not incidentally, with willows.

Early on, they they see a couple of fairly strange things. One is an otter, swimming along the river, which, at first glance, they mistake for a human body. Shortly thereafter, they see, in the distance, a man in a boat, who at first seems to be signaling to them, but whose motions they eventually decipher as the man making the Sign of the Cross.

Still dealing with very strong winds, the two men decide to take to the river again the next morning. That night, the narrator takes a little walk, and begins to feel extremely uneasy about the island, the willows, and the general surroundings:

But my emotion, so far as I could understand it, seemed to attach itself more particularly to the willow bushes, to these acres and acres of willows, crowding, so thickly growing there, swarming everywhere the eye could reach, pressing upon the river as though to suffocate it, standing in dense array mile after mile beneath the sky, watching, waiting, listening. And, apart quite from the elements, the willows connected themselves subtly with my malaise, attacking the mind insidiously somehow by reason of their vast numbers, and contriving in some way or other to represent to the imagination a new and mighty power, a power, moreover, not altogether friendly to us.

This "attack" will increase in strength and continue unabated until the end of the story. The narrator -- and eventually the Swede -- begin to see things at night, in the willows, that inspire a kind of awe-struck horror, and they begin to hear a sort of gonging sound that seems to come from everywhere at once, and which "defies description". These incidents, mixed with mysterious damage to their kayak and depletion of their food, works on the men's minds. The Swede appears to be more sensitive to their new, terrifying reality -- to what it is and what it means -- and together the two men come to understand this small island as a kind of intersection of two realities: the world as we know it, and another world, filled with beings whose purpose is grim on a cosmic and metaphysical scale, a scale so large that it is impossible to understand, however much the men might desperately crave understanding:

An explanation of some kind was an absolute necessity, just as some working explanation of the universe is necessary -- however absurd -- to the happiness of every individual who seeks to do his duty in the world and face the problems of life. The simile seemed to me at the time an exact parallel. 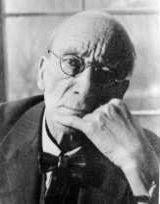 This is an essential passage, I think, because it is the core of what Blackwood is writing about, his specific reason for writing horror, which is the great doubt every human being, no matter how confident they are in their own view of the universe, has at some point, that not only is there no benevolent God, but there is no comfort in our existence. There is only pain and horror and despair and meaningless suffering. Everything else is just a mask. Or -- and this may be closer to the point -- if there is a force governing the universe, it is malignant. This is what Thomas Ligotti is writing about, and it's what many claim Lovecraft is writing about as well, although it's hard, sometimes, for me to see it in his work.