I don't know why you put up with me.

As a writer I'm all over the place.

From there, he goes on to list a few of his books, and their basic premises, all the while referring to "Ketchum titles" or "Ketchum books". He seems to think his readers are really thrown by the crazy variety of his books, as well as their occasionally extreme nature. In short, it's very self-serving (which any such introduction will be, almost by definition), and self-aggrandizing. It's a very obnoxious attitude, particularly since Ketchum -- a highly regarded writer by, from what I can tell, younger horror fans who yearn for a full-blown return to "splatterpunk" -- has yet to prove to me that he comes close to deserving the status in the genre he currently enjoys.

He's not a bad writer; he's just not a good one, either. He's also not really a horror writer, at least as I define it. He's only written one novel that deals with the supernatural (She Wakes, which I haven't read); much of his work -- the work on which his reputation rests -- deals with the extreme end of human cruelty, and is often on the verge of being crime fiction.

The most potent book of his I've read is The Girl Next Door. Like a lot of his work, the book is based on a true story, in this case that of Sylvia Likens, a 16 year-old girl who was tortured and murdered by other children in her neighborhood, under the encouraging tutelage of Gertrude Baniszewski, a mother of some of the children involved. That true story really, truly is

unspeakably horrific. Ketchum's novel was, as a said, effective, and gave me one bitch of a nightmare. But it also reeked strongly of self-righteous exploitation. At the same time, it's the only book by Ketchum that had any kind of lasting impact on me, and maybe I'm accusing Ketchum of exploitation because I just don't like having done to me what that book did. Maybe his heart was in the right place, I don't know.

Moving on to today's selections from Peaceable Kingdom, I first chose a story called "The Box". It begins with a father riding the bus with his three young children, two girls and a boy. It's almost Christmas, and the four of them have been out ice-skating. Sitting near them on the bus is a man with a red box held tightly in his lap. Danny, the young boy, asks what's in the box. The man says that it's a present. Danny asks if he can see it, and the man agrees:

He opened the lid of the box on Danny's side, not all the way open but only about three inches -- enough for him to see but not the rest of us, excluding us three -- and I watched my son's face brighten at that, smiling as he looked first as Clarissa and Jenny as if to say nyah nyah and then looked down into the box.

The smile was slow to vanish. But it did vanish, fading into a kind of puzzlement...

Shortly thereafter, Danny stops eating. No breakfast, no lunch, no dinner, no candy, no snacks. He tells his parents he's simply not hungry. His parents become obviously concerned, and eventually take him to their doctor. Not soon enough, by my thinking, and the doctor is an "old-fashioned" doctor who believes the hospital should be a last resort. This bit of characterization is simply Ketchum's clumsy way of delaying the question of intravenous nourishment as long as he can.

Before going to the hospital that his parents should have taken him to far earlier, Danny is referred to a therapist. This is because nothing physical has been found wrong with him, and when told by his doctor that not eating leads to death, Danny replies "So?"

There are things about this story that aren't at all bad. It's generally well-written, and there's a strong, creepy drive to the narrative. But apart from trying to dodge modern medical science longer than is reasonable, Ketchum also fails to make this story's conclusion register. I have two theories regarding the conception and writing of this story -- it's possible that neither theory is correct, and that both are unfair, but here they are: 1) Ketchum had what he believed to be a strong idea for a story, and began writing before knowing where it would go. And he never did figure out where it would go, and decided to try and turn that emptiness into a virtue by pumping up the existential subtext. Or 2) Ketchum was more calculated than that. He knew that his usual brand of horror -- hyper-violent, even sadistic -- didn't win awards, so he would self-conciously produce a story that would, one that seemed to be about a lot, but wasn't really about much of anything. If I'm right about that, then he succeeded, because "The Box" won a Bram Stoker Award for Best Short Fiction.

"The Box" just seems phony to me. I don't believe that Ketchum meant a word of it. It's not that "The Box is a bad story; it's just that I don't trust it.

The next story is more typical of Ketchum. Called "Megan's Law", it deals with one man's reaction to the news that a sex offender has moved into his neighborhood. He's a widower, with a young daughter, and when he finds out that this man, Phillip Knott, did six years in prison for 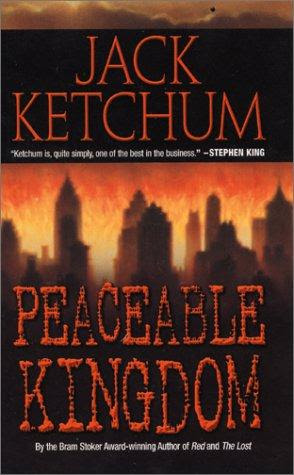 raping a young girl, he decides to act. Mostly told from the father's point of view, the story occasionally shifts to Knott, so that we can go back and forth between understanding why the father is going to do what he ends up doing, and wondering if men like Knott, repellent and evil as we may find them, shouldn't be given at least a chance to overcome their urges.

The story feels almost like it's meant as a kind of corrective to the brutal, morally black-and-white fiction of Andrew Vacchs (which deals heavily with violent retribution dealt against men like Knott). So it's meant as a challenge to the reader, it wants to ask the reader what they would do in the father's position. But is it really wise for the author to begin and end such a story with the words "What would you do?" I think Ketchum should publish Peacable Kingdom as a pop-up book, and when you turn to "Megan's Law" a big hammer should pop out and smack you on the head.

Okay, now I'm just being negative. These stories aren't that bad. And the truth of it is, with all my deep reservations about his fiction, I do find Ketchum to be compulsively readable. He's got something -- he at least has the ability to get under your skin. But he doesn't push himself to be a better writer, technically speaking, and he currently also seems content to play with the same subject matter he's been reworking for the last twenty years. If he keeps going this way, I will quickly find him less compelling, and since that compulsion is already of a particularly cheap and nasty kind, that distinterest could begin just about any day now.
Posted by bill r. at 7:13 PM

Jeez, I'd forgotten about Andrew Vacchs. It's been a while since I've read him, but I remember being a little creeped out at his violent moral certainty, yet drawn to it at the same time. It would be nice to be that sure.

As far as Ketchum goes, is it his stories or his style? Because this sentence you quoted is not a great one:

"He opened the lid of the box on Danny's side, not all the way open but only about three inches -- enough for him to see but not the rest of us, excluding us three -- and I watched my son's face brighten at that, smiling as he looked first as Clarissa and Jenny as if to say nyah nyah and then looked down into the box."

Before some smart-ass says it, not that I'm much better, but still. I don't get paid for it, either.

I've only read Vacchs's short fiction, but I have to say, I kinda like it. I think that anybody, no matter where they stand on the real-life equivalent of the brand of justice he describes, can appreciate the catharsis of his work. Vacchs's main career involves work on behalf of child rape victims, so I can understand the kind of anger he spills onto the page.

As for Ketchum's writing -- yeah, that sentence isn't great, and I knew that as I was typing it out for this post (the "but not the rest of us, excluding us three" part especially irks me). He's not always that bad. Sometimes he's worse! Ha ha ha. Actually, that's true. But sometimes he's better. However, this is what I meant when I said he doesn't try to push himself to be a better writer in the technical sense.

Well, perhaps he doesn't feel he has to push himself, cause of the publication thing.

And I've only read Vacch's novels, and yes, the cartharsis factor is high.

Have you seen the film version of The Girl Next Door? It's really bad, so I wouldn't recommend it, but after seeing the movie I was curious if it held the same tone as the book. It's pretty sick, and the film, at least, is really exploitative.

Oooh, oooh, I know what's in the box! [raises hand]Pick me, pick me! It's Gwyneth Paltrow's head right? Right?

Maybe it's all writers in general, but reading your entries this month on horror writers, a good deal of them seem like self serving assholes. Just a first impression.

And the other day I was looking up the Boris Karloff hosted anthology series Thriller, because I have a banner I've done for it and I want to see them all. And of course, Netflix doesn't have it (they have season 1 of the 1973 show, not the same thing as the Karloff one which ran from 60 to 62. Anyway, the reason I'm bringing it up is because one of the episodes from the second season is The Weird Tailor. I've got to get that show now but it's not on DVD yet. Aaarrrggghhhh!!!!!

Fox - I did see that movie, and yes, it's awful. The book is better, but that doesn't mean I'm recommending it to you. You're not missing out on anything if you skip it.

Jonathan - I've gotten the same impression from the younger generation of horror writers. It's not all of them, but there do seem to be a lot of arrogant pricks writing in the genre these days. It wouldn't bother me so much if those particular writers could back it up with better fiction, but so far, in my experience, they can't.

And when I was looking for "The Weird Tailor" for free on-line, I did see that it had been an episode of Thriller. I'd like to see it, too, but now I'm worried you'll become so obsessed with this story that it will end up being a let-down.

Boy am I excited to see The Weird Tailor! I am assuming, not unreasonably, that it will be the greatest, most extraordinary, most original, epic, phantasmagorical viewing experience of my life! I am further assuming that all of the greatest films I have ever seen combined and multiplied by a thousand will not begin to even scratch the surface of the deep and profound experience I will have when viewing it.

I hope I'm not setting myself up for a letdown.