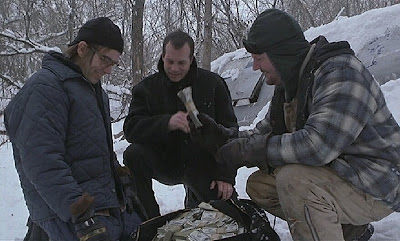 In Scott Smith’s novel A Simple Plan, three men – Hank, his brother Jacob, and Jacob’s friend Lou – are chasing a fox through the woods (Hank, a married man with a baby on the way, a responsible man who disapproves of the foolishness and general drunkenness of the other men, has joined in reluctantly) when they found a crashed plane. Inside that crashed plane, along with the body of the pilot, they find a bag of money, totaling more than four million dollars. After some uncertainty and debate, they all decide to keep it.

I read Smith’s novel some brief time after Sam Raimi’s film version first came out. The book has a very, very black heart, confronting, as it does, with unnerving directness the ease with which a “normal guy” – in this case, Hank – can switch from that law-abiding normalcy to a level of violence that literally reaches the level of butchery, all the while justifying to himself that he needs to do it, because he has a new baby, and the money will give his family a new life, and anyway if he doesn’t kill this person, he will go to prison. And the one thing that trumps all is that he cannot go to prison. One does what one must to avoid that sort of fate.

An excellent, near-great novel, I thought, and think, though I had a sense even then that Smith might have been better off reigning things in a little bit. A Simple Plan, the novel, is in some ways quite bonkers, in a way that sometimes stretches credulity. At the same time, I can’t help but admire Smith’s nerve in sticking so ruthlessly to the terrible path of murder and karmic retribution he’d mapped out. I was most curious about how the film version would play out, though I have to admit my anticipation for the film (which I eventually saw on video) was tempered, in a particular sort of way, with thoughts like “Sam Raimi???” A not dissimilar reaction greeted the notion of the not-dissimilar-to-Sam Raimi Peter Jackson, he of Dead Alive fame, directing the far grander Lord of the Rings, but I knew little of Jackson at that time, while I knew plenty enough of Raimi. At the time, I would say my favorite film that Raimi had anything at all to do with was Miller's Crossing, in which he has a cameo as "Laughing Gunman". After that, and more significantly, would be The Hudsucker Proxy, which he co-wrote. Then Evil Dead II, which I honestly enjoyed, and after that...what? Not Darkman, I can assure you. I'm in the curious position with Raimi (and Jackson, too, come to think of it) of not really beginning to enjoy his films until he decided to break out of his role of the crazy drive-in ironic genre guy (which is a role that his true fans -- which you'll notice I don't put in quotes, because they really are his true fans -- hold very dear) and go mainstream. A Simple Plan was the movie that found him really tucking into that new filmmaking life, and it ranks as one of my personal favorites. 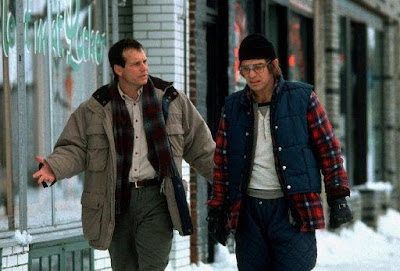 A Simple Plan is a crime film, obviously, and, set as it is in a Minnesota farming community, a snowy one. This is crucial in one sense, because as he embarked on making the film, Raimi consulted with his old friends Joel and Ethan Coen, who had recently knocked the world on its face with Fargo, also a crime film, also set in Minnesota (and thereabouts), and also very snowy. What the Coens offered by way of advice, I don't know, but Raimi and DP Alar Kivilo succeed entirely at depicting a frost-beaten Minnesota, whose warm homes seem all the warmer, and whose drafty cabins, such as the one inhabited by Jacob (Billy Bob Thornton), seem like they barely count as "indoors". The cast is rounded out by Bill Paxton -- a most curious actor, I've always thought -- as Hank, Brent Briscoe as Lou, and Bridget Fonda as Sarah, Hank's wife. My math tells me that this comes out to two out of four, or two and half out of four. In different ways, Briscoe and Paxton have the same problem, in that it often feels to me as if they're reading their lines as opposed to saying them, but while Briscoe -- saddled with the most basic, cog-in-the-plot character out of all of them, to be fair -- never really breaks that habit, Paxton sometimes does. I'm thinking primarily of the film's wrenching climax, which I won't spoil, but at one point a realization dawns on Paxton's Hank, and the horror that twists his face comes only partially from what has just been suggested to him. The rest comes from the fact that he knows he's going to do it. This is the heart of Scott Smith's wretched, pitiful, sympathetic and hateful protagonist.

But as in the novel, the beating heart of A Simple Plan is Jacob. It is my belief that Billy Bob Thornton has never been better, either before or since this film. A bit of a cliche', in that Jacob is both the dumbest and the kindest of all the characters, the writing and Thornton's performance make him thrive -- pathetically thrive, if that's even a thing. The key to getting Jacob off the ground is the dialogue, and Scott Smith, who wrote the screenplay (and cut out a fair amount of what made the novel so crazy, for better or worse), gives him some wonderfully funny, stumbling bits, such as when he looks at Hank's iced-over porch and says "You gotta scrape that shit off'a your, you know, your watcha-callit deal, there" or when he notices crows in the branches overhead and says "They just sit around waitin' for somethin' to die so they can eat it. Weird. What a weird job." At his best, Thornton has always sat really easy inside these simple rural characters, but never more easily than here. The lifelong sadness of Jacob, the basic desire for money that lets him follow Lou, and then Hank, into this nightmare, followed by the ultimate moral catastrophe that wrecks him completely, is always played just right by Thornton.

Meanwhile, if Jacob is the beating heart, Bridget Fonda's Sarah is the black mind. Not even aware she's as terrible as she is, Sarah is a pragmatic monster, sensing just the thing to do to avoid getting caught by the police, either for the stolen money, or, far more troublingly, for the murders that follow along. I remember reading the book, and getting to a certain point and telling my mom, who had already read it, that Sarah was going to cut Hank off at the knees when the opportunity presented itself. Well, I was wrong, but Sarah is almost the most shocking character in either the book or the film. Before she knows anything about what's going on, it's very easy for her to spout off basic moral points because serious temptation like this has never come her way. Once it does, she blossoms, and while Hank's the one getting blood on his hands, she finds it not at all difficult to skate over that and on to other matters, such as how to keep the murders from tracing back to her. And Fonda nails it all. It's crucial with both Sarah and Hank to play them straight, and to play the guilt, and the disbelief, and the terror. Murders aren't only committed by people like Jeffrey Dahmer. They're also committed by people who would never suspect themselves capable of such a thing. This is the central power of A Simple Plan.

So Raimi has moved on, dabbling in movies pitched at about the same level of studio interest and budget, until being surprisingly picked, Peter Jackson-like, to helm the Spider-Man franchise. And leaving aside all the problems that eventually came along with that, I'm a big fan of those movies, and the choice of Raimi. I like the guy. He's bent just enough, and he wears a suit every day when he's making a movie. But I have a feeling that I will always regard A Simple Plan as his best film, because it's the one time he's ever really plumbed the depths. I hope he does again some day.

This post has been part of the Raimifest blogathon, hosted by Bryce Wilson of Things That Don't Suck.
Posted by bill r. at 6:11 PM

Excellent work Bill. I really oughta read the Smith book, I was under the impression that it was fairly close so I never bothered, guess I was wrong.

The one thing I would take issue with is your characterization of Raimi as an Ironic filmmaker. I think the thing that appeals to me about Raimi is what an unironic filmmaker he is. Three Stooges gags, Demons from the outer dark, superheroes, pulp fiction and cowboys, these all seem to be things that give Raimi genuine pleasure. And rarely if ever do I get the sense that he feels himself above his material.

Anyway, minor quibble. I would love to see this film as a double feature with One False Move.

Billy Bob is great in One False Move too. I really like this film and book, nice job Bill!

Great review of a great movie. That may be my favorite of Raimi's, too. At least, I think it's the best job he's done with more "serious" material. He hasn't gone that route since Spider-Man came knocking. I think Fonda and Thornton easily walk off with the movie, but the entire cast is great, and while I haven't read the book, I'm glad that the movie chose not to get too graphic and macabre. It's unsettling and tragic, and I think straining for shock value may have upset the delicate balance of audience identification.

I go back and forth on it, Matt. On one hand, I think if the film went as far as the book does by the end, people would have a hard time buying it. On the other hand, the first murder, of the old man, plays out much differently in the novel, and its much more chilling, even terrifying. At that point, you realize that all bets are off in a way that's much more of a kick in the gut than the film's version.