Got Down On My Knees 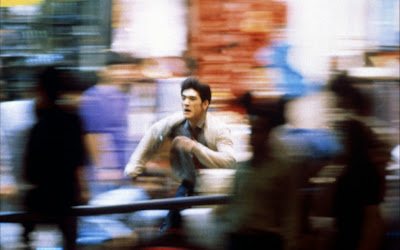 Here's what a dope I am. When I first saw Wong Kar-Wai's Chungking Express back in college, I thought it was -- and this is a paraphrase of my thoughts, but nevertheless very accurate -- "Good, but slow." I think the deal, or my deal, was that if this is a movie about cops, why weren't they shooting more bad guys? In general, I still think shooting bad guys is a vital part of a good cop movie, but my mistake in college was to think of Chungking Express as a cop movie, which it isn't. It's a movie with cops in it, yes, but that's a very different thing. What Chungking Express actually is, is a film -- or two films, really, as Wong tells two different and only lightly connected stories -- very much like what Hollywood and some of your quirkier indie types have been trying, and failing, to make for about the past decade or more.
.
What was so surprising to me on rewatching the film last night is the realization that the first story, which features Takeshi Kaneshiro as a cope named He Qiwu (or "233", after his badge number) lamenting the end of his relationship with a girl named May and his crossing of paths with a shady woman with drug connections played by Brigitte Lin, is a light thriller, and the other story, featuring Tony Leung as a cop angling in on, and then retreating from a romance with a stewardess (Valerie Chow) while never noticing the cute goofy girl (Faye Wong) who works at the food stand he frequents, is a romantic comedy. The fact that Chungking Express is a beloved (and rightly so) arthouse film that has been Criterionized while similar such American-made films tend to feature Jennifer Aniston and Katherine Heigl and Ashton Kutcher and all that kind of thing, is I guess we'll say an interesting one.
.
None of this is to say that Chungking Express is typical of either the light thriller or the romantic comedy, but of course that's sort of my point. Wong's film is a curiously mesmerizing piece of work, curious because the source of that mesmerism is hard to track. It's instantaneous, at any rate, as the pulsing, noirish music at the beginning, paired with Kaneshiro's opening narration, somehow submerges you into Chungking Express's particular environment, one that is not only alien to most Westerners, but would be curious to most Hong Kong natives, representing as it does, according to Tony Rayns on his Criterion disc commentary, "old Hong Kong". All of which seems to be setting up a quite different film than we get. While Brigitte Lin's mysteriously bewigged and be-sunglassed woman is indeed involved in crime, and is being chased even, and even shoots people, most of the first story is given over to Kaneshiro, a cop who doesn't see much crime, and his hope that by buying 30 cans of pineapple, one a day, each with an expiration date of May (after his ex, named May) 1st, which would mark the one month anniversary of their split on April 1st, she would somehow come back to him before he reached 30 cans, or their love will have expired with the pineapple. 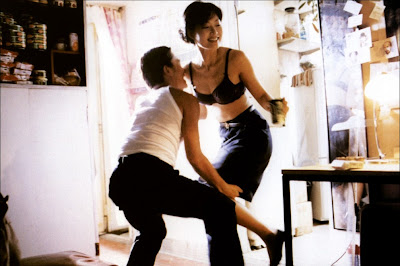 This, you will agree, is simply unbearable quirk, as is Tony Leung's habit, in the second story, of talking to his possessions -- bars of soap, stuffed animals, washcloths. As is Faye Wong's habit of playing "California Dreamin'" by the Mamas & the Papas over and over and over and over and over and over again. And over and over again. This is the kind of quirk that earns indie romantic comedies a quick swift in the teeth. Right? Except, no, not in the case of Chungking Express. That's what I find so strange about the film. How does Wong make this stuff work? In the case of the first story, there's an element of real danger, which I guess helps, and in the second story both Tony Leung and Faye Wong are effortlessly charismatic (Tony Leung in particular has an immense presence, without needing to do anything at all). And as far as insufferable hippie bullshit goes, "California Dreamin'" is actually pretty good. So there's all that in the film's favor. But I think the real key, or as best I can guess at it anyway, to Wong's ability to bring this stuff across, stuff that in other hands would turn the film into a shrieking nightmare, is that he simply makes no big deal about it. The pineapple thing, for instance, is very important, but is treated in an almost off-hand manner. Not only that, but after a while its essential absurdity is duly noted. Similarly Leung talking to soap and all that...it's just a funny thing he does. Its not forced on us because Wong is desperate to make us love the guy. And also that: there's no desperation in Chungking Express, not in the filmmaking. It's all cool and easy and enthralling. And it looks a treat, too, having been filmed by Christopher Doyle and Andrew Lau as it was, who never quite let go of the noirish blues or the neon reds and yellows of Hong Kong nightclubs.

TIFF Lightbox will be screening Chungking Express tomorrow and running through the 27th. On the 23rd, the Lightbox will be hosting a conversation with Christopher Doyle (not accompanied by a screening of the film, as I'd mistakenly reported earlier). If you're willing and able -- and you should at least be that first one -- I suggest checking it out.

I must admit, somewhat embarrassingly, that I've never seen Chungking Express. Maybe I will now, or maybe not. I understand what you're saying though because movies that are hardest to define are often the movies that take me a long time to see because I can't get a good feel for what I'm in for ahead of time. Your review reminds me that's why I probably still haven't seen this.

Also, off topic, I like how your posts are single spaced sometimes, like "They Hang People for This" then double-spaced, like "Affinity" and then sometimes, like this one, they're both! That's The Kind of Face You Hate for you, always mixing things up.

It's a good movie, though. It's not so hard to define once you've seen it, and aren't a stupid college kid. You should see it.

And oh yeah, shut up! My formatting on Blogger is all screwed up lately, and I never know what's going to happen. It started with my post about A SIMPLE PLAN, I think, and the thing posted is one giant paragraph. I eventually fixed it, but I can't figure out what to do with all these spacing issues. The normal methods don't seem to work and are, anyway, so very tedious...

Bill, blogger allows all kinds of template tweaking these days. You should change things up. Maybe it's the old template you're using (I suspect that may be it). Just don't do one of those really busy templates with all the background pictures and shit. I hate those.

But that will ruin everything! Or so I fear. What I really fear is change, though.

You want to do a new banner and whole redesign? That would be pretty cool! Let's do it!

Sure, of course. Seriously, no pressure. Maybe over the next few weeks we could play around with some new banner designs or something. Or not. Obviously, it's your call.

I'm up for it, because I've had it with this formatting bullshit. I'll probably get in touch with you about it this weekend. Thanks for your kind offer!

It IS incredible that I didn't wanna punch the screen after hearing "California Dreamin'" for the 15th time in it. Only Wong Kar-Wai can do this, apparently. Good piece!