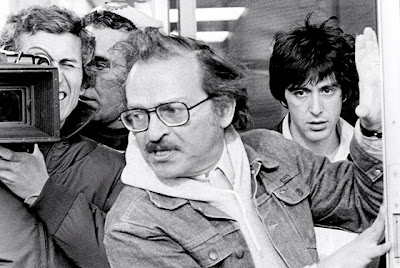 Sidney Lumet, who died yesterday at the age of 86, was and is a very important filmmaker to me. Along with Hitchcock, Kurosawa and, of course, Spielberg, Lumet was one of the first directors I knew by name. Roughly speaking, it began with my dad's appreciation (I won't say love, because I don't remember the film coming up all that often) of 12 Angry Men, which was rented on day, and watched by many in my family, and at a fairly young age I was held in that film's grip, and shocked that I was, because 12 Angry Men is black and white and nobody shoots anybody else, and it's all just twelve guys in a room arguing. It has just now occurred to me that this was at the very least an early indicator of my love of dialogue as a part of writing, as a form in and of itself.

My dad carried the torch for Lumet still further -- though since he didn't care about filmmaking, as such, I doubt my dad knew Lumet, though he liked several of his films -- by introducing his sons to Dog Day Afternoon. Primarily, the interest for him was that he knew at least one of the FBI agents involved in the actual case, but also how right the film got it, how deeply it understood not just the bank robbers played by Al Pacino and John Cazale, but also the cops, represented primarily by Charles Durning, and how this situation, a bank robbery turned hostage situation, was completely new -- there was no book to go by. Dog Day Afternoon amazed me then and amazes me still (12 Angry Men less so, because even though I still love it, it's clear that too many of Henry Fonda's arguments are complete nonsense; he'd argue for acquittal if the accused's story was anything short of "I was framed by Sasquatch"). It's relentlessly suspenseful and entertaining, and deeply human, but never easy. However you might want to Monday-morning-quarterback it, Durning's Sgt. Moretti is working his ass off to save those hostages.
Lumet made films about the law his whole career. Quite often his film's were set within the world of law enforcement and courtrooms. Lumet knew precincts and judges' chambers better than anybody. Even lesser films like Find Me Guilty take on an authenticity amidst the goofiness any time Ron Silver's judge opens his mouth, or retires to chambers. It was Lumet's drive in these films to find justice within the mess of the judicial system, to find its reason for being still intact somewhere. As a result, he regularly made films about corruption, most famously in Serpico, but also Prince of the City, Night Falls on Manhattan, and the deeply underrated Q&A from 1990, a wild, violent story of morality that features one of Nick Nolte's best performances. Even 12 Angry Men is about corruption, in the sense that an ostensibly fair system can be unconsciouly thwarted by the individuals who've been tasked to carry out the job.
As with any prolific and long-lasting professional filmmaking career, Lumet's was one of peaks and valleys. One of his best films, The Verdict, manages to simultaneously be grim, even unforgiving, and crowd-pleasing, but look at the films that bookend it: Deathtrap, Prince of the City, Just Tell Me What You Want on one side, Daniel, Garbo Talks and Power on the other. This is by no means intended as a comment on quality, but taking into account how is success gets defined in terms reputation, fairly or unfairly, Lumet had a number of dry spells. His last film, Before the Devil Knows Your Dead, was considered something of a, you know, enormous comeback for him, and a surprising one. I've been following Lumet's career as long as I've been able, and even I was surprised by that one. Flawed as I find it, I, for whatever reason, did not expect a film that was, by turns, that blunt and elegantly nasty from Lumet, not by then. I'm ashamed to admit now that post-Verdict Lumet felt less to me like Q&A and more like Guilty as Sin.
But Lumet's the kind of director that gets taken for granted. The credit for Network is given entirely to Paddy Chayefsky, for instance, The Verdict is a movie that Paul Newman should have won an Oscar for, and Dog Day Afternoon and Serpico are, for too many people, Al Pacino films. Yet Lumet had an astonishly rich and varied career. He made Long Day's Journey into Night and The Wiz, for Christ's sake, and if one actor should be held up as Lumet's guy, it's not Pacino, with whom he only made two films, but Sean Connery, with whom he made five, films which, at their best, not only represented interesting shifts for Lumet, ramshackle and stylized as they are, but Connery as well (did Connery ever again, or before, play a role quite like Det. Johnson in The Offence?). Sidney Lumet was a professional filmmaker, it was his job, and he was great at it. As Michael Gough's recent passing snipped another thread to the past, so does Lumet's. The pros are all dying.
Posted by bill r. at 10:31 AM

A consummate pro, who brought style and authenticity to his material without STAMPING ALL OVER IT SO EVERYBODY NOTICES HOW BRILLIANT I AM, and an exemplar of an all-but-extinct type in today's all-distracting-flash, no-emotional-substance Hollywood.

A fine remembrance, Bill. Though, for me, since Lumet was such a great director of actors and thus, so many of his films are remembered for their writing or performances (Murder on the Orient Express, Serpico, 12 Angry Men, Network, Murder on the Orient Express, Dog Day Afternoon, etc) I would have to say the best pure evidence of his talent and abilities as a director is Fail Safe. It is a film with an average screenplay with fine actors who are required only to deliver mainly technical lines ("the casualties would be 30 million", "recall the bombers", etc)and a ridiculous and obvious ending. The only thing that can make it an effective, tense thriller is the director and Lumet does it.

I might even write it up had I not stopped caring about blogging. But I did so I won't. Once again, great job here.

John - Eh, that type is basically extinct. It would bother me more if there weren't so many good show-off directors, but the world will not see the likes of Lumet again. Ever again.

Greg - Thanks, and I happen to think DEATHTRAP is a good example of his skills as a director. He really nails that, and there are some terrific, Hitchcockian moves in there.

I haven't seen FAIL SAFE all the way through, but from what I have seen the B&W look is great, really unusual and stark.