.
As far as I can remember, I first became aware of Gregg Araki by reading some quote from him in Premiere magazine. He was talking about Bringing Up Baby, and he said -- this is some years ago now, so I won't be quoting directly -- something about how the last scene of that film, with Cary Grant and Katharine Hepburn and the dinosaur skeleton, said positively loads about sex and gender and so forth, the kinds of things most of the audience wouldn't have a clue about, but Hawks's genius was to make it all funny on a surface level. This all failed to draw me to Araki's work for two reasons: one, he clearly believed that all the people in the audience for Bringing Up Baby, whoe'er they may be, were a giant pack of rubes, and that should Araki find himself planted among them, he could safely sneer at them because they wouldn't even know what he was sneering about. Two, it's the mark of a dubious thinker who talks about all the topics that a given film "says a lot about" without ever offering up examples of what the film is saying. And PS, I love Bringing Up Baby.
Despite the ease with which I wrote off Araki, which is a gift I have, I did find myself eventually watching one of his films. It was 1995 or so, which means that not only had Reservoir Dogs come out, but so had Pulp Fiction, and the Araki film in question was his killers-on-the-run story The Doom Generation, a cynical, appalling bit of nothing that felt like it was made up of a few minutes shaved off of Amateur Hour. The Doom Generation is a punk film, in the absolute worst sense of that word (outside of the music genre, I don't actually think there's a good sense of the word). The free-spirited outcasts are the good, and the normals who surround them are to be either quietly judged, or noisily killed. It's a hateful, shallow, badly made piece of trash. I didn't like it, is what I'm saying. 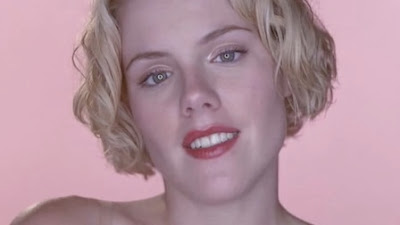 Araki went ahead and kept making films anyway, and along the way his cynicism and contempt for anyone who, say, lived in the suburbs (or, more to the point, was happy living in the suburbs) expanded in its complexity to the point that in 1999 he made Splendor, a romantic comedy that attempts to mainstream Araki's love of outsiders, sexual ambiguity, and so on. Which is all well and good. The problem is that in Splendor he features a young woman named Victoria (Kathleen Robertson) announcing that her small home town was nowheresville, implying that no one with any brains or ambition could ever be happy there, so she goes to L. A -- except Araki never once stops to think about how fucking boring his outcasts are. They say nothing interesting, do nothing interesting, become nothing interesting, and if I had to spend more then five minutes alone in a room with any one of them I'd saw open my own jugular with my fingernails. I think they key to the shallowness inherent in Splendor -- which, for the record, is about a long term three-way relationship, and is basically really just a "what if?" twist on the ending to Chasing Amy -- comes in a scene involving Kelly McDonald's character, who is named Mike (even though she's a girl!). Mike is on the phone with Victoria for whatever reason, and we see Mike open up her refrigerator. Inside is row after row of bottles of Orbitz, which if you don't remember was a juice, or something, from the late 1990s whose marketing hook was that it had little balls of whatever floating in it. The beverage was clear, but you'd have all these little orange or red or green balls in there. I had one once. The point is, the shot is entirely meaningless (other than to possibly show Araki holding up his end of a product placement agreement), and all I could think was that Araki thinks this Orbitz shit is some kind of symbol of his characters' iconoclasm. That if you want to really know how out there these people are, how far away they live from normal, then check out this juice they drink. There's shit floating in it, which you won't find with your goddamn Pepsi, motherfucker.
And yet...I just watched Splendor recently. The only reason I was willing to is because of another Araki film I saw, between Splendor and The Doom Generation. After Splendor, Araki didn't make a feature film for six years, but when he returned in 2005, he was, for once, deadly serious. The film, Mysterious Skin, based on a novel by Scott Heim, is about two young men, played by Joseph Gordon-Levitt and Brady Corbett, who when they were kids played on the same Little League team, and who were both molested by their coach (Bill Sage). Gordon-Levitt's character grows up to be a prostitute, cynical and smart, or smart-ish, warm and friendly, but reckless. He both hates and loves the coach, or his memory of the coach, who so horribly abused him when he was eight years old. 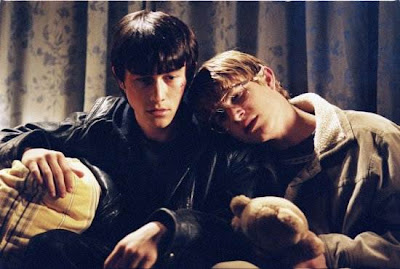 Corbett's character, meanwhile, has entirely suppressed his memories of what happened, so that the defining memory from his childhood is of standing on the roof with his mom and sister, watching a UFO sail by overhead. He's also aware of blank spots in his memory, which he believes are the result of having been kidnapped by aliens. Though we know better.
Mysterious Skin is a film of genuine pain, it is concretely about what these boys have gone through -- it is graphic, deeply uncomfortable, unflinching. Its ending is heartbreaking, but hopeful. Mysterious Skin is not silly, it's not stupid, and it sure as hell ain't shallow. When I first saw it, I wasn't able to shake it for days. That Araki had also made The Doom Generation was hard to fathom, but I didn't let it bother me. I don't let it bother me now. Mysterious Skin is an excellent piece of work. Araki has made two films since, neither of which have I seen. I'm still very hesitant. But whatever shot in the arm led to Mysterious Skin, let's hope he finds more of it.
--------------------------------
TIFF Lightbox is hosting a retrospective of the films of Gregg Araki, starting today, and centering on his new film Kaboom. But everthing's being shown, including Mysterious Skin, which I recommend most highly. For showtimes, go here and click on the film titles.
Posted by bill r. at 8:56 PM

I had one once.

I'd rather watch you drink an Orbitz than watch one of these movies. Although you make a reasonable case for Mysterious Skin.

The Orbitz was, as I remember it, not that good, and the little balls, while edible, were flavorless. But to be fair, I drank it really well.

Have you seen MYSTERIOUS SKIN, or are you just now mildly curious?

Just curious. Mildly about says it.

I saw Araki interviewed at the Lightbox--a really enjoyable evening. The clips from the early B&W films looked kind of blechy (excruciatingly mopey artschool dialogue) but the later ones intrigued me... He was a wonderfully lithe genial character, & it was amusing that he said how much he generally disliked violence & horror films despite his own use of pretty disturbingly graphic violence.

Haven't had the time to catch the rest of the retrospective, alas, but did see the new one, Kaboom, which I recommend. The ending is just silly, admittedly, but there's just so much good stuff before then that I had a great time, & it's visually quite beautiful. It's best to go into it knowing ABSOLUTELY NOTHING about it since it's full of WTF? plot developments.