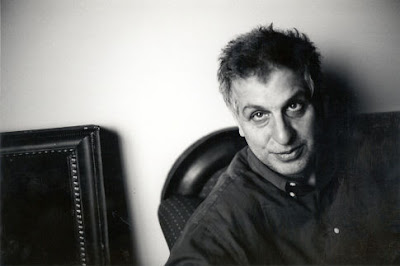 One of the true poets working in documentary film -- in fact, along with his friend Werner Herzog, perhaps the only documentary filmmaker who has poetry as one of his primary goals -- Errol Morris had created a short series of striking but roughly naturalistic films before cresting a wave with 1988's The Thin Blue Line, a film which is not only haunting in its aesthetics, and bold in its use of recreations, but also did the one thing that more exhaustingly polemical documentarians (which by my count includes pretty much all the rest of the ones who are currently working) desperately want but never actually achieve, which is that it affected a tangible change in his subject (that is, Randall Adams, the man wrongly imprisoned for murdering a police officer, received a new trial and was released based on what Morris's film revealed).

Morris has followed that up with Mr. Death: The Rise and Fall of Fred A. Leuchter, Jr., Fast, Cheap & Out of Control and a short-lived but fascinating documentary TV series called First Person. All are imminently worthy, but Mr. Death, with its wry, but somehow mournful evisceration of one man's delusion, is my favorite. Fast, Cheap & Out of Control, however, really plumbs the depths of Morris's intellect -- the way he edits the varying stories of four men with unusual interests and professions so that the words of one occasionally overlap and comment on imagery associated with another, is at times exhilarating. So exhilarating that when I first saw it, one image, of a horse's poised fetlock -- which matches the story of an animal trainer featured in the film -- is accompanied by another of Morris's subjects speaking on the nature of animals and humans and intelligence in a way that made me say something along the lines of "Holy crap."

Morris keeps going, thank God, keeping the documentary form alive and breathing while the collected mass of films with a sermon to preach listed as job number one fight an occasionally winning battle to keep it sterile and smug. Morris's basically niche profile was at least briefly raised after he won an Oscar for 2003's fascinating The Fog of War about Robert McNamara, but Morris is too odd and restlessly intellectual -- even when I think he's full of hooey -- for that profile to stay raised for long. This stuff comes and goes, though, and is ultimately ephemeral. Still, though, I wish his time in the spotlight had lasted long enough to bring about a DVD rerelease of A Brief History of Time, his amazing 1991 film about Stephen Hawking. Ah well. Surely that must be on the horizon. Right? Right??

Labels: A Brief History of Time, Affinity, Errol Morris, Fast Cheap and Out of Control, Mr. Death, The Fog of War, The Thin Blue Line

Yeah, that's true. If you read my review of Countdown to Zero (which you should but I don't know if you did... hmmmph!) from a few weeks back it's one of the (many) things I criticized it for. It's polemical to the point of no longer being balanced in any reasonable way.

Also, when I first saw Thin Blue Line I was very disappointed because I was expecting the kind of documentary where talking heads presented evidence and still photos provided counterpoint. Seriously, I saw when it was released and that's what I was expecting so I was kind of confused by it. Of course, I kept thinking about it for days and that always clues me in that I have seen something special. I returned to it and have since found Morris to be a personal favorite of mine.

Expect another documentary review on the new revamped Cinema Styles soon. And like Countdown it will be quite disappointing.

I absolutely will check it out, Greg. You do watch a lot of documentaries on very specialized subjects, though, and I feel left in the dust. Why do you do that to me?

As for Morris, yeah, THIN BLUE LINE took some getting used to. I remember thinking the recreations were really corny, and only settling in when there WERE talking heads to ease my furrowed brow. But like everyone, I came around. And that music! Again, only Herzog has scores in his documentaries that can match Morris's.