.
The oft-cited tonal shift that occurs roughly halfway through Jonathan Demme's Something Wild, which has a thoroughly sparkling Criterion release set for May 10, is rather strikingly illustrated by the following series of images. While not exactly temporally equidistant from each other, you can nevertheless see how the film begins as a light, off-kilter romantic comedy... 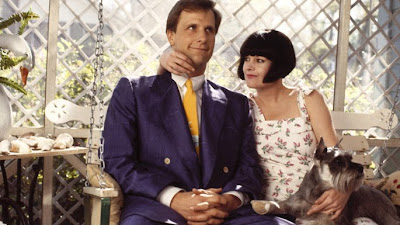 ...featuring Jeff Daniels in goofy mode as Charlie Driggs, a white collar type with a secret penchant for petit larceny, and the ever-airy-voiced Melanie Griffith as Lulu (or Audrey, depending on where you are in the film), an aggressively quirked and sexual young woman who pins Charlie on that larceny business and seduces him not only into bed but onto the road, where the two drink and commit various effervescent misdemeanors. It's hard at first to sympathize with Charlie, who we're told is married and has kids, who we have no reason to believe are terrible people. Yet boy he sure fell into bed with Lulu without a moments hesitation or guilt.

At any rate, those misdemeanors are committed with various levels of recklessness, and can't help but draw the attention of folks like the fellow below, played by John Sayles... 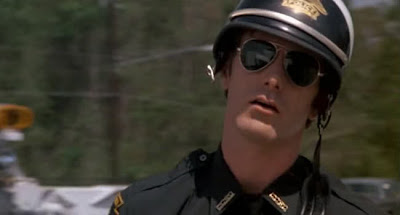 ...which gives the film a certain amount of suspense, even if you happen to be rooting for the cops, as I kinda sorta was. Demme's film, however, is one of two distinct halves, and once Ray Liotta as Lulu's husband Ray, who's the kind of guy who is serious about the crimes he commits, and makes Charlie and Lulu look like pikers, arrives on the scene, the violent force of his character brings new information to light while simulatenously ratcheting up the suspense, darkening Demme and DP Tak Fujimoto's previously bright 1980s palette, and leading where, one does not know... 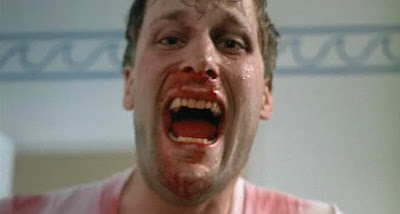 Not quite the frivolous, loosening-up-the-square road comedy we started with, Something Wild is loose and exact in its details, which was typical of Demme in this period, and it's as diverse as his filmography. He preceded Something Wild with both Swing Shift, starring Goldie Hawn and Kurt Russell, and his famous Talking Heads concert film Stop Making Sense in 1984, and followed it first with another, but quite different concert film, Swimming to Cambodia with Spalding Gray, various TV projects, and then back to colorful comedies with 1988's Married to the Mob.

Apart from proving to me that it can pay to stick with movies that annoy you (twice before, I was so put off by what I judged to be the film's solipsism that I turned it off before Liotta even showed up), Something Wild, and all 1980s Demme films really, stands as a bit of a time capsule for a particular kind of American film. The sunniness of the whole thing, in contrast to some of what's taking place on the ground, is part of it, but so is seeing the name "Tak Fujimoto" in the credits (a name I first noticed on Demme's The Silence of the Lambs), and the appearance of people like Charles Napier and, even more to the point, Kenneth Utt. The late Kenneth Utt was Demme's producing partner, and he had cameos in several of the movies he not only directed -- in Something Wild he plays the "Dad" of "Mom & Dad's", a restaurant Charlie and Lulu eat in -- but produced as well, most notably George Armitage's Miami Blues, in which Utt plays a stone-face (well, of course) but apparently grieving Hare Krishna, attended to, in a half-assed sort of a way, by Det. Hoke Mosely, played by Fred Ward, whose partner, Bill Henderson, is played by Charles Napier.

I started noticing Utt everywhere in the 80s, or anyway that's how it felt. He almost never said a word, but you don't forget a face like that. Him, and Napier, and Demme, and Fujimoto, they all seemed to be, and were, joined at the hip, and it was like a little get together every time they all showed up in the credits for the same film. A get together then, a time capsule now.
Posted by bill r. at 5:46 PM

Great review. Can't wait to dig into SOMETHING WILD. I'm glad you gave it a chance.

Oops! Yoinks! And all the rest of it. Yes, that's what I meant. Fixed, and so forth. Thank you.

I saw this when it came out and liked it, yet, I've never had a desire to return to it. Funny, I don't know why. I like where it gets to but, like you, didn't enjoy the journey there quite as much. I know I liked it but I know watching it again would mean watching the first part and I'd rather just jump to the Ray Liotta part. But, of course, without the first part, the Ray Liotta part doesn't have the same impact.

It's a conundrum, I tell ya!

But it's the first part of the movie that has the nudity.

Yeah, it's a curious film in that regard. I don't find the sexy, lighthearted stuff terribly compelling, or funny. When everything goes to shit, it becomes interesting. Nobody ever talks about the chunk of the movie that comes before, and I wonder how many people were restlessly waiting for something more, back in 1986. Something more does happen, though, so there you go.