They Hang People for This Watching, for the first time, the narrative revelation that almost immediately precedes this shot in the Coen brothers' Barton Fink is alarming, or was so to me. The film popped up on cable last night, and I turned it on right as Barton (John Turturro) is preparing to bed down for the night with the person who, the following morning, will form the crux of the aforementioned revelation, and I remembered in some vague way how I first reacted when I saw the film in 1991. Confusion and disbelief about sum it up, but later, when Barton asks Charlie Meadows (John Goodman), who lives down the hall, to come to his, Barton's, room, I suddenly had a flash to what I thought at this moment in 1991, which was: "When Charlie goes in there, [REDACTED] won't be there anymore." Though I was only a fledgling movie fan at the time, I'd already been conditioned to expect that kind of reverse as standard operating procedure. But if you've seen the film, you know that [REDACTED] was, indeed, still there, and that from that point on, all bets were off.
.
Narrative left-turns are a bit of a dying art. Among the less imaginative, they have transformed into twist endings, which have a different impact that left-turns. Twists, even when they're effective, tend to be approached -- and this is taking as a given the unlikely possibility that you're watching the movie unaware that a twist is involved -- as a means to subvert a fairly traditional story, or add another meaning or shade or whatever. Though too often used as an example when talking about these sorts of things, The Sixth Sense fits what I mean, because, while a good film, it follows a fairly standard, which is not necessarily to say predictable, path, working as both a ghost story and a kind of detective story until the twist. Even a twist as goony as Sleepaway Camp (and I see that I'm getting further and further away from Barton Fink...) doesn't redirect the story in any way. It's a note of pure lunacy, but it's not unlike amending the joke "Why did the chicken cross the road? To get to the other side" by adding "Plus also the chicken had a dick."
Barton Fink is a whole 'nother kettle of fish, though. What Barton wakes up to is actually what he wakes up to. The repurcussions of what that discovery implies follow a logical path (well, more or less, and up to a point), but what the Coens have announced at that moment -- and I'm pegging that moment not as the moment Barton makes the discovery, but rather when Charlie sees the same thing and confirms to the audience that [REDACTED] ain't going anywhere -- is that you, the viewer, have not seen this story before. Polanski and Hammett influences notwithstanding, you won't be able to guess where we leave you once the credits start to roll. And damned if they ain't right. Barton Fink surprises. Few films do that. Few films reach a point where the audience asks itself "What could possibly happen now? What does this mean? Where is this going?"
And where does Barton Fink go? 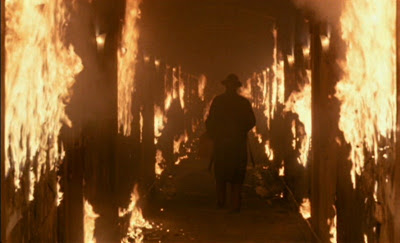 It's such a rare and wonderful thing for a serious film fan to have no clue where a movie is going. The last movie I can think of where that really applied for me was the first time I saw "Pulp Fiction." There have been lots of modest surprises but nothing like that feeling in a very long time for me, though I'm sure there most of have been something else...

It goes to Hell, Bill! And kudos to you for distinguishing between narrative bends and narrative twists, and the concomitant degradation of narrative storytelling in this populist medium that has taken such a hold on our lives.

I hope they paid you by the comma for this!

Bob, yes, Tarantino is very capable of this sort of thing, too. INGLOURIOUS BASTERDS springs to mind.

Arbogast - I do use a lot of commas! It's true! And thank you for the kudos.

"Who saw that coming?"

Anyone who first saw the movie on DVD....

Why would DVD, specifically, make the difference?

A shot of the flaming hallway is used as the main menu screen on the DVD, and a brief bit of Goodman screaming down the hallway is used as a transition to and from the same menu. I imagine that's what the above poster is referring to.

When I first saw Barton Fink I remember liking it but being kind of put off by how not usual it was. I was reacting to what you were, in a way. I watched a film that didn't quite go where film watching experience told me it would and I felt kind of disoriented by that. The result was that I watched it again within about a week and then bought the DVD years later as soon as it came out. What a great film.

And DVD menus have been ruining movies for years! When I finally introduced my youngest son and lovely wife to the original Planet of the Apes a few years back I had to tell them to both turn away from the screen (which they obligingly did) until I could start the movie since the main menu shows the fucking Statue of Liberty scene on endless loop!!!

In the case of PLANET OF THE APES, wouldn't your wife have known, simply by being alive in the world, about the Statue of Liberty ending anyway?

No, not really. She doesn't watch television and was, at the time (probably close to ten years ago now), mostly unfamiliar with film past 1960. Pop culture was a lot easier to avoid up until the mid 2000's, when blogging and social networking took over. Before that it was a lot easier to block out modern popular culture. And, brother, did she! But now, of course, with me and the kids completely immersed in the culture 24/7 she is doomed to know it all. Mwahahahahaaaa!

I so envy what Laura once was, and mourn that which you have taken from her.

Taken away? We destroyed her! Hahaha, you hear? D'ya hear?! Destroyed!!!