If You Like Blogathons and Sam Raimi, Well Have I Got News for You! 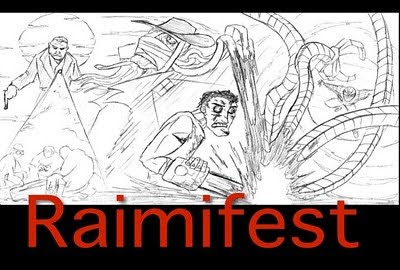 Bryce Wilson, he of Things That Don't Suck fame, just kicked off his Sam Raimi blogathon...er, yesterday. But it goes on through April 2nd, so there's still plenty of time to make up for my neglect, and I suggest you do. Raimi is quite the curious fellow, beginning his career as a filmmaker with an unabashedly drive-in sensibility, before eventually graduating, or rather switching gears to, Hollywood blockbusters. Quite surprisingly, to anyone who'd followed his career from the early years. And then, of course, came Drag Me to Hell, which might signal a return to his roots. Anyway, I'm most interested in the middle period of Raimi's work, after the Evil Dead stuff, and before Spider-Man, when he was first making his mark with the studios. I will be writing up one of those films in the next couple of days, and, sadly, I think that anyone who has any feeling for my tastes and sensibilities will probably be able to correctly guess which film I'm going to take on. I'm doing it anyway, though!

Meanwhile, check out Bryce's links for the first couple of days, as well as his own write-ups, and should you have a blog of your own, why not throw in your own two cents?

Thanks for the help Bill. The thing I love about Raimi is just how much of his drive in sensibility ends up in even his most mainstream films. Looking forward to what you have coming.

Now that I reflect on it for a moment The Raimi film I'D like you to see you review most is The Gift .

Well...it won't be that one. I like that movie well enough, but Raimi made another film before that which I'm much, much closer to.

Oh yeah, not saying that it's his best. Just that if it were a modest paperback written in the eighties I could see it making for a great entry in 31 Days of Slash.