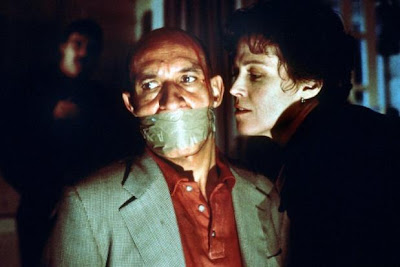 In Death and the Maiden (d. Roman Polanski), Sigourney Weaver's Paulina Escobar is already angry, frustrated, and frightened when we first see her. In a dialogue-free opening, save for some radio chatter which provides plot information, we watch her as she finishes preparing dinner for her husband Gerardo (Stuart Wilson), but these are just the mechanics she needs to perform. As we learn, via the radio, that her husband has been appointed to head up a tribunal that will publicly try cases of torture and murder carried out by the recently overthrown dictatorship of the film's unnamed South American country, we can see Paulina's inner tremors and haunted desperation rise up, just under her skin. She was one of the tortured, and she considers the tribunal, whose goal is to merely name, not prosecute, the guilty, to be a whitewash. This is what her husband will oversee.

It gets worse. The short version is that one way or another, and for one reason or another, a man named Roberto Miranda (Ben Kingsley) follows Gerardo home, and Paulina recognizes the man -- or his voice, his quirks of speech, his snorting laugh -- as the man who tortured and raped her all those years ago. Soon, she's giving it back, beating Miranda, tying him up, gagging him, and putting him through any number of indignities, over Gerardo's horrified protests.

Is Miranda the man she thinks he is? This question is at the heart of Ariel Dorfman's play, on which Polanski's film is based (with a script by Dorfman and Rafael Yglesias), and it's a rather too neat way to approach questions of justice and guilt, madness and terror. The material is in danger, at every turn, of becoming schematic in its countless ambiguities, though Polanski does try to cut that with his typically perverse sense of humor ("You don't want to push him off the cliff?"), and by playing up the goofy personality of Kingsley's possible demon. It all winds up being an odd mix, but an involving one. This despite the fact that, in the end, Death and the Maiden is a filmed play, worse still a filmed modern play, which means that every five to seven minutes one character will leave the room, or ask another character to join them outside, leaving two of the three leads alone at any given time so that they can talk. Any time this happens in a filmed modern play, you can count on listening to a five to seven minute conversation -- this stuff can get as rote, structurally, as any sitcom. None of this matters if the play is especially good, or if the playwright is a master of language, but when it's only fine, as it is here, when the dialogue is merely a vehicle on which to pin bits of backstory and, I guess you'd call it characterization, well, then I think you can be excused if you choose to let the film play while you go get yourself a bowl of cereal.

Then there's the answer to it all, the real, real truth -- or not the answer, but what the characters and, rather more to the point, Dorfman and Polanski choose to do about it. The solution -- which I have to assume is Dorfman's -- is sort of insidiously gutless, and the ending is almost funny due its endless false starts. A nice shot at the very end leaves the audience something to wonder about, but the penultimate scene on the cliff is quite goony in its refusal to depict action that might have consequences. Yes, there's that shot, and those looks between characters in that shot, but we only get that because Dorfman and Polanski betray they're central character, one who betrayed not an ounce of doubt, until she was required to.
Posted by bill r. at 11:15 PM