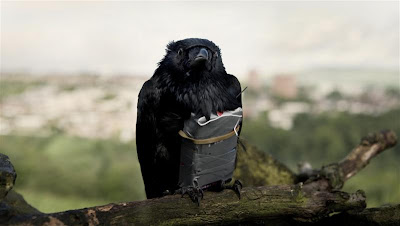 Four Lions (d. Chris Morris) - Despite the fact that I've been discussing this film at some length at another internet location over the last day or so, I'm finding it very difficult to write about Four Lions, Chris Morris's somewhat madcap comedy about a group of Muslim suicide bombers planning a major attack in London. The problem I'm having is that, while I can very easily pinpoint specific problems with the film -- and will do so shortly -- I have a larger objection to it that encompasses film in general, or Film Today, that can't be justifiably laid on Morris's doorstep. For instance, it occurs to me that, in Modern Film As It Is Practiced Today, suburbanites routinely don't get as fair a shake as Morris's terrorists do here, but what that has to do with Morris or his film, I couldn't tell you. It's just a sense of things that I have, one that I don't like.
.
But how far does Morris's fairness towards his terrorists really go? Well, pretty far, all things considered, but then again not all that far. Four Lions is a comedy, remember, and if Morris's inspiration wasn't Jimmy Breslin's novel about bumblingly absurd mobsters The Gang That Couldn't Shoot Straight, it might as well have been. There are more than four terrorists here, though there are only four at the end, and of those only three matter: Omar (Riz Ahmed), the leader, and the smartest one, and a family man with an unnervingly supportive wife; Waj (Kayvan Novak) the dim-witted nice one, on whom the film's morality ultimately hinges; and Barry (Nigel Lindsay) a radical white Londoner who converted to Islam, who is about as stupid as Waj, but more confident. Morris makes quite a bit (of all sorts of things, including comedy) out of the logical break between what they're planning and why they think it's the right thing to do, and what the reality is. We're invited to sympathize, up to a point, with these men as human beings, but it's understood that no one should be rooting for success here, and certain fatal accidents are meant to carry a certain relief, and produce laughter, which is more or less the result I experienced.
.
Morris is walking a very fine line here, and I can't help but find the film slightly inorganic, as if Four Lions came into being only because Morris thought it would be awfully ballsy to make a comedy about suicide bombers. If the film had its head secured more firmly, the scenes between Omar and his wife (Preeya Kalidas) might have played better, or differently. As it is, her warmth and support and complete lack of perspective not only regarding his impending death, but the deaths of whoever is unlucky enough to find themselves within his blast radius, comes off as quite eerie, and appalling in a way that it's hard to know who to blame. Well, her, and Morris is quite evidently not pro-terrorism, but these scenes seem designed to underline the idea that Omar is just a man, and his wife is just a woman, and they love each other -- they are human -- not to underline the blood-curdling ruthlessness of their shared ideology. I can't imagine that Morris isn't aware of what's going on in these scenes, but I believe there is a tonal challenge here that he's not quite up to.
.
Where the movie fully collapses for me is in the final stretch, when Morris is obliged to trot out a small cast of British counter-terrorism characters, who bumble right along with the terrorists, and who are bigoted, and have no warmth, and are merely satirical targets. The argument has been made to me that this is a film, specifically a comedy film, about the terrorists, so naturally the counter-terrorism guys won't get much focus. A fair point, except that it's hard for me to accept what Morris is implicitly dealing out here, even if he doesn't realize it, which is that it behooves us to understand the though processes and hearts and souls of those who would strap bombs to themselves, step among us, and hit the trigger, but that those who would seek to stop that from ever happening are to be looked at askance at all times.
.

I Spit On Your Grave (d. Steven R. Monroe) - When Meir Zarchi's original I Spit On Your Grave was released in 1978, it was met with righteous howls of disgust by not a few people. Most famously, Roger Ebert's review fairly seethed with anger as he judged and found wanting not just Zarchi and his film, but the crowd with whom he saw it:

I wanted to turn to the man next to me and tell him his remarks were disgusting, but I did not. To hold his opinions at his age, he must already have suffered a fundamental loss of decent human feelings. I would have liked to talk with the woman in the back row, the one with the feminist solidarity for the movie's heroine.

There was a tendency at that time for some critics to assume, as they did nothing more than fulfill their professional obligations to see certain extreme horror films so that they could write about them, that the audience that surrounded them was made up entirely of either potential or currently active serial killers (see also Harlan Ellison's comments about going to see The Omen, of all things), and while Zarchi's film remains an entirely unpleasant viewing experience, Ebert's subsequent positive review of Rob Zombie's The Devil's Rejects makes me question from what angle he really approaches this kind of material. The guy didn't even blush.

The thing about Zarchi's film is that it could not be any less complex about its motives, or what it wants the audience to experience. The lead character (Camille Keaton) is repeatedly, and graphically, beaten and raped by a group of men. This goes on forever, and as hard as it is to watch initially, it only gets harder from there. Then, left for dead, the woman rises up and exacts just-as-brutal revenge on her attackers. Zarchi (who was supposedly inspired to make the film after witnessing a rape, a claim I've always sort of questioned) wants our horror at Keaton's prolonged suffering, followed by our feeling of grim catharsis at her vengeance. The fact that one of her attackers is mentally handicapped only adds some ambiguous spice, something all revenge films must have. And it's all just a terribly uncomfortable parade of atrocity.

So it's I guess maybe a comment on the state of something-or-other today that, when the announcement was made that there was going to be a new I Spit On Your Grave in 2010, the reaction was essentially "Oh, they're remaking that one, too?" If you could take that reaction and somehow translate it into a creative drive, then you'd have director and co-writer Steven R. Monroe's attitude towards that very remake, a film that pulls way back on the level of violence inflicted on its heroine (Sarah Butler) and turns her eventual reign of terror into a series of damn silly Saw-like torture scenes. Whatever else can be said about Zarchi's film, you can't call it silly.

But, you know, one doesn't want to sound as if one is wishing a given film could have contained more rape. Quite frankly, Monroe's film has plenty. It's just that Zarchi's film was a film of two halves -- the rape and revenge killings are inseparable, and are, in fact, all that the movie is. In the remake, rape is the launching pad. All revenge films need to get kicked off somehow, after all, and it's pretty clear that whatever imagination was being delicately portioned out in the making of this new I Spit On Your Grave, it all went to thinking up the bit with the guy who has a shotgun stuck up his ass. And apparently, in the interim between being left for dead and coming back for some scalps, Butler's character has turned into a super detective, because what she's able to pull off -- getting vital information on the private family life of one of her attackers, somehow ensuring that another attacker will step just there right when she needs him to -- is not only impressive, in a stupid sort of way, but never explained. Not that, typically, explanations are needed in a film like this, but some nod in that direction can make absurdity a bit easier to swallow.

So I think maybe I Spit On Your Grave circa 2010 was born out of a certain cynicism. In fairness, if you can score the rights to that title, it must be pretty hard to resist.

Good reviews of two movies I now have pretty much zero interest in seeing.

Then my job here is done.