There's No Hope for Me to Die 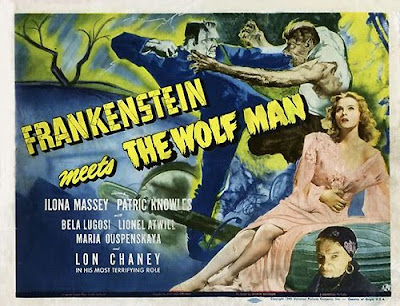 While I freely admit that among the classic Universal monster movies The Wolf Man is far from the best, I also happen to think it gets a pretty unfair rap as a low-rent pretender. Among the things I especially like about that film, which was directed by George Waggner, is Lon Chaney, Jr.'s portrayal of Lawrence Talbot as a lovable lug, kind of a pleasant meathead, whose reaction to the bizarre and terrible turns his life has taken is to be scared out of his mind. There's a pathos to that which eschews the high tragedy aims of movies like Frankenstein for a more blue collar approach -- instead of tragic, The Wolf Man goes for sad.
.
So on that level at least, I take The Wolf Man kind of seriously, and could probably become a bit defensive about it, should the situation warrant it. My viewing today of Frankenstein Meets the Wolf Man (d. Roy William Neill) might be that situation. The problem is that this is a direct sequel to The Wolf Man, picking up four years after Talbot's death at the merciful hands of his father. In attempting to rob Talbot's grave, two no-goods sweep away the wolfsbane covering his body, said wolfsbane being the one thing keeping Talbot dead. So now he's not dead anymore, and he's still a werewolf. And, rather intriguingly, the plot of Frankenstein Meets the Wolf Man centers around Talbot's quest to die, for good.
.
After linking up again with Maria Ouspenskaya, the gypsy from the previous film, Talbot begins to track the story of Dr. Frankenstein, who apparently had mastered the powers of life and death. And here I'll not that Frankenstein Meets the Wolf Man is more or less a direct sequel to James Whale's Bride of Frankenstein as well, with similarly injurious results. The Wolf Man and Bride of Frankenstein end on notes of real heartbreak, which the makers of this later film -- director Neill, producer Waggner, screenwriter Curt Siodmak, who also wrote The Wolf Man -- basically scribble out by reviving not only Talbot, but, obviously, Frankenstein's monster (no Dr. Frankenstein, though, he's still dead, replaced by glaze-eyed Ilona Massey as his daughter, Baroness Elsa Frankenstein). In other words, the two deaths from those films that mattered the most no long matter. Or I guess that depends on how seriously you take sequels to beloved film, and how easily you're able to separate them if you don't like where the follow up leads you. For my part, I can do that pretty easily, so I'm not overly put out by the sacrileges of Frankenstein Meets the Wolf Man.
.
Instead of being angry for an hour and twelve minutes, I instead took note that this film is to The Wolf Man and the two previous Frankenstein films as The Godfather Part II is to The Godfather, in that, like the Coppola sequel, all the points made by Waggner and Whale are simply half-heartedly underlined by Neill (there's a difference, since Coppola's underlining was quite vigorous). This is not terribly uncommon among sequels, I suppose, but there's something about Chaney's Talbot going from a happy-go-lucky fellow at the beginning of the first film, to a terrified man who wants to be rid of his curse by any means necessary by the end, and then, in the next film, to a man who, no, seriously, really wants this curse taken care of, that put me in mind of Michael Corleone's light-to-dark-to-super-dark journey. So there's that, and then there's Bela Lugosi taking over the role of Frankenstein's monster from Karloff, only to remind the world that whatever his talents, Lugosi was no Karloff, and Frankenstein Meets the Wolf Man's ending, which is so abrupt that you have to wonder if the studio said "The moment you film a castle collapsing, no matter how much left you have to shoot, you must shut down production." That's the only thing that makes any sense, at least.
Posted by bill r. at 3:27 PM

I watched Frankenstein Meets the Wolf Man almost immediately after seeing The Wolf Man and, rather than feeling like Larry's resurrection undid the tragedy of his death in the previous movie, I thought it made his character even more tragic. Not only is he going to turn into a vicious killer every month, he's might do it FOREVER.

Serieswise this is actually a sequel to Ghost of Frankenstein rather than Bride. In Ghost Ygor, played by Legosi, has his brain transplanted into the monster's body (played by Chaney). So it sort of makes sense that Legosi plays the monster in this one.

Ah. Well, I haven't seen GHOST OF FRANKENSTEIN, so that explains that mishap.

As for Talbot, I see what you mean, and I do think Talbot's quest for death is a really interesting way to go. But the film doesn't really do anything with it. The ending is so ridiculously abrupt that whatever potential the idea had simply evaporates.

Ghost isn't very good. It's the third Frankenstein sequel. It follows Son of Frankenstein, which, while not nearly as good as Bride, was still a pretty impressive film. Son had Karloff in his last turn as the Monster, Lugosi having fun as the vengeful Ygor and Rathbone as the son trying to redeem his father's reputation.

The end of FmtWM is too abrupt. No argument there. Most of the later Universals can really only be appreciated in their moments. They aren't so satisfying as stories.

Talbot does eventually get a happy ending. That gets undone in Abbott and Costello meet Frankenstein. Oh well.

I haven't yet made the decision to treat these films critically but I suppose that day will come; it'll be a task to separate their assets and liabilities from the nostalgic tangle of my debt to them as a child. These movies rescued me from what could have become a very bad adolescence... those foggy graveyards, blasted heaths and tumbledown castles were a great place to hide until I could grow up and take care of myself.

Bill, you should see Ghost of Frankenstein, which has some wonderful atmosphere and some top flight Atwillery, although under Erle Kenton's direction the thing feels lead-footed. (How could he do so well with Island of Lost Souls and be so impersonal elsewhere? How?!) Chaney's transformation from happy-go-lucky to yak-haired death-wisher was very in tune with the times, in which pre-war ebullience was supplanted by postwar ennui.

I will. I even have the damn thing on DVD, I just got the order mixed up. And quite frankly, foggy graveyards, blasted heaths and tumbledown castles are more important to me now than when I was a kid. Which probably means I'm doing this all wrong.

I love FMTW. It’s a perfect B-Movie, banging along, oozing with atmosphere, a veritable catalog of Universal sets (add mad labs and traipsing Tyroleans to the graveyards, heaths and castles) and broadly painted yet earnest characters.

As to the sudden ending, movies of the era often slammed to a close. Some cowboy hero would rope the bad guys, kiss the girl, the music would swell up and you’re looking at end credits. FMTW’s abrupt finale also fits the film’s headlong rush. Lugosi was frail, looking like a shrunken head Frankenstein in his big padded suit, collapsing on set and calling upon a line-up of highly visible stand-ins and stuntmen to spell for him, making the film a puzzle-piece of furious editing.

Add Ms Ouspenskaya’s accident, thrown from her cart, cracking an ankle and abruptly vanishing from the story. And, of course, there’s the business of yanking all The Monster’s dialogue in post-prod, further tightening and condensing the action.

It’s amazing, given the backstage drama, quick fixes and editing nightmares that the film is so damn entertaining