No Different Than Any Other Soldier 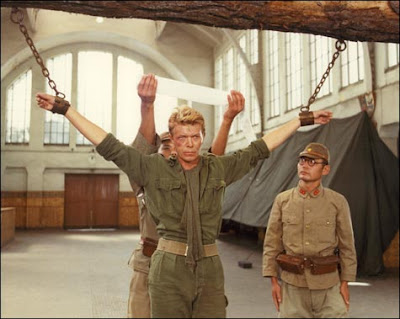 If there's one aspect of Merry Christmas, Mr. Lawrence (d. Nagisa Oshima) that stand out as particularly unusual -- and this from a movie about which nothing is especially usual -- is the man who made it. Or rather, the nationality of the man who made it. I don't mean that Oshima is openly critical of his country, as he'd been that before on a regular basis, but more that the film, about British POWs during WWII, being held in a Japanese prison camp in Java in 1942, depicts Japanese culture as it existed during the war as entirely alien, from the point of view of its Western protagonists.

This is the sort of thing you'd expect from Western filmmakers, such as the David Lean who made The Bridge on the River Kwai (which Merry Christmas, Mr. Lawrence echoes at times). But I don't believe I've ever seen a filmmaker depict his own homeland in a way that is so alienating to himself. That's the key here. After suffering days of torture at the order of camp commander Yonoi (Ryuichi Sakamoto, who also wrote the film's striking, Philip Glass-by-way-of-Tokyo score), the film's British heroes, Jack Celliers and John Lawrence -- played respectively by David Bowie and Tom Conti -- have a discussion about "what is wrong with them", them being the Japanese, specifically the Japanese of the crazed, honor-bound imperialism under Hirohito. In the film, the question is a good one, because while Lawrence, a sympathetic expert on the Japanese and the camp's liaison between the prisoners and Yonoi, originally believes he's the man to ask about these sorts of things, Yonoi relentlessly thwarts his clear thinking by behaving in ways that are entirely inexplicable. It's just that the idea of a white character, or a pair of white characters, looking on in dazed wonder at a culture and a race other than their own is the kind of thing that critics like to blast movies like Cry Freedom and Glory for doing. Here, the dazed alienation comes from within. Of course, Merry Christmas, Mr. Lawrence is otherwise in no conceivable way analogous to Cry Freedom or Glory, but still, there it is.

Whatever is at the root of Yonoi's actions -- which don't always make sense even to his own men -- it seems to relate to a deeply suppressed sexual attraction to Celliers, who Yonoi wants to take over as the POWs leader from Hicksley (Jack Thompson), an officer of the stiff-upper lip variety. But when Yonoi judges Celliers to be "a disappointment", nothing much is to be done from there on. As such, the entirety of Merry Christmas, Mr. Lawrence is played out in concentrated form during the films opening minutes as one of the Japanese officers, named Hara (played by Takeshi Kitano, in a terrific performance) forces Lawrence to witness the interrogation and awful abuse of a Korean guard and a Dutch POW, the former of whom, Hara maintains, raped the latter, though in this case force, it seems clear, was not used. The sexual denial of these two men, and Hara's blinkered approach to justice will be played out within Yonoi throughout the film.

I was put off by the bland claims that "nobody is right, everybody is wrong" that pop up from time to time in Merry Christmas, Mr. Lawrence, usually from the mouth of Mr. Lawrence himself, especially at the end. This is the sort of "sounds like it means something, actually doesn't" philosophizing that is typical of war films of a certain era, which one has to get used to. Fortunately, I'm used to it, and I appreciated the film's occasionally ethereal strangeness -- Sakamoto's score has a lot to do with that, but also, and interestingly, considering what I've already said about Oshima's approach to Japan, in a flashback to Celliers' child- and young adulthood, which presents life under the English crown as eerily dreamlike, and the dream's not always a good one.

So, an odd film, in other words. Odd, striking, discomfiting, provocative, and very much worth your time.
Posted by bill r. at 12:35 PM

I was put off by the bland claims that "nobody is right, everybody is wrong" that pop up from time to time in Merry Christmas, Mr. Lawrence, usually from the mouth of Mr. Lawrence himself, especially at the end.

I was put off by that too when I saw it my one and only time on Showtime back in the mid-eighties. I mean, it really just doesn't work with WWII. Plenty of other wars, yes, but not WWII. It didn't start because of some abstract diplomatic breakdown or an obscure call to arms to honor ancient treaties. No, Japan attacked Pearl Harbor, seized Wake Island and invaded the Philipines all within ten hours! When that happens, guess what, Japan is wrong, those fighting to oust them are right.

I like it when we're put off by the same things. The other thing about that last scene between Hara and Lawrence that bugged me was the fact that both men seemed to regard Hara's pending execution as unfair. You can say that execution is never right, but you can't say that Hara isn't completely guilty. He's depicted in the film is a pretty nasty guy. He's human, too, but this "why me?" attitude, as though he was some peaceful guard who was hauled in with a bunch of torturers based solely on his uniform is absurd.

Yeah, now I kind of want to watch it again but I'm remembering that stuff about it, too. I bet our former FB friend thought it was really, reeeeeeeeeeally unfair to the Japanese. Because, you know, America is the most evil country that has ever existed. Bar none.

Thankfully, that guy apparently doesn't read my blog. And I actually am glad about that.

Honestly, though, what we're talking about here is a very small part of the film, and you should see it again. It's a fascinating movie.

I will. And also, I hope to God he never, ever visits Cinema Styles again. Ever.