Don't Make Me Hurt You 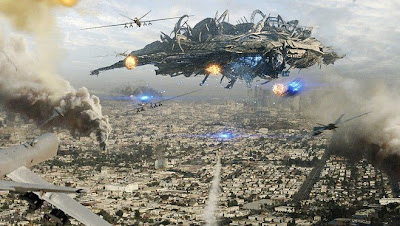 The question that must be answered regarding Skyline (d. The Strause Brothers) isn't whether the film is good or bad. It's bad. This much we know. The question is: how bad is it? And I'm afraid you're not going to get an answer from me, because as I watched this shamelessly derivative story of alien invasion unfold (Colin and Greg Strause don't so much nod at Spielberg's War of the Worlds as jump up and down, waving their hands feverishly, and pointing at War of the Worlds as they try not to wet their pants), I reflected on the fact that while this deeply stupid movie was critically blasted the moment it poked its head into theaters, I would much rather this rake in the hundreds of millions of dollars than something like Transformers. I mean, if a stupid movie has to be the one to make all that money, then why not Skyline?

The film is about a global catastrophe -- aliens invade the Earth and blow Los Angeles (among other cities, one assumes) all to shit, but it focuses on a small group of characters, headed by Greg Balfour, Scottie Thompson, and Donald Faison, who watch the awe-inspiring devestation from the window of Faison's (he plays a movie star) vast L. A. apartment. Like the Spielberg film, and Cloverfield, Skyline keeps its cameras well back from the action, at least at first, placing it among the distant observers. Though by no means original to the Strause Brothers, this is, I think, a wonderful technique for this kind of film, putting the audience amidst the action by keeping us far away. Much of what little success Skyline achieves can be chalked up to this (this, and to the fact that the special effects really are pretty damn good). Seeing massive, hovering spaceships and giant creatures shambling through the wreckage of L. A. essentially through the lens of a really good telescope is not that much different from how most of us experience actual catastrophes that we see reported on television, and because of this, Skyline strikes an occasional chord.

However, the film also features people saying and doing things, and this is where it all falls apart. None of the cast sparks, even a little, at any moment -- it must be said that Skyline has some of the very best shots of actors looking at things off-screen and screaming that I've seen in ages -- and the things they're made to say sometimes cross the line into embarrassing. For instance, at one point, when friends have died and our heroes are at their lowest, Scottie Thompson has to utter, with tears streaming down her face, the words "I hate L. A." Ha ha, because she thinks they're all going to die. And frankly, this is nothing compared to the actual story, the idiocy of which tends to slowly dawn on you with the same slow dread as gradually realizing you accidentally e-mailed that picture of your wang to everybody. As best I can tell, one of the many ways these aliens go about killing humans is to make them stare at a blue light. That blue light hypnotizes the person, whose eyes go white, veins darken and rise beneath their skin, and then they're sucked into the alien's...vagina face? I couldn't really tell, but anyway, they're dead afterwards. However, if something breaks your lock on that blue light, then you start to become a, in a way, sort of like a superhero. And people complain about the aliens in Signs not knowing that water is poisonous to them! But I guess I can almost see it -- staring at the blue light just long enough to get super powers, but not get killed, is the difference between getting bitten on the hand by a radioactive spider, and getting bitten in half by a radioactive shark.

In any case, this little bit of plot draws us towards the end, which has gotten some play on-line as being appealingly bonkers, but I'm not prepared to hand it that kind of credit. Foolish, yes, and crazy in an "Are you kidding me?" sort of way, but not so batshit that anyone needs to go out of their way to see it. No, by then, all of Skyline's best stuff has been left far behind, and I was left with thoughts of what might have been. What might have been could have simply been a better rip off of Spielberg's War of the Worlds, but I'd take that over Transformers or Independence Day any time. Hell, I'd take Skyline over those films as it stands. I don't care how bad it is.
Posted by bill r. at 8:39 PM

"... the idiocy of which tends to slowly dawn on you with the same slow dread as gradually realizing you accidentally e-mailed that picture of your wang to everybody."

Standing ovation for that one, sir!