Darling, He Said in a Tender Voice 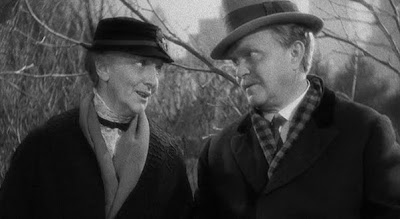 Anyone who's heard the audiobook version of This Is Orson Welles -- which consists of the actual interviews between Welles and Peter Bogdanovich that make up the print version, with some bonus tracks -- will no doubt remember the moment when either Welles or Bogdanovich, can't remember which, brings up Make Way for Tomorrow (d. Leo McCarey). I have the audiobook on cassette, which means I haven't heard it in a long time, but I remember that when Welles talks about McCarey's film, he sounds as though he's been practically transported, the emotion almost overwhelms him, and he comes close to babbling about Make Way for Tomorrow's melancholy brilliance. Jesus, if that word's even big enough for it. As Welles said, "It would make a stone cry."
.
I say the film's melancholy, but it achieves this through a gentle, consistent sense of humor; without that, I wonder if Make Way for Tomorrow might not be unbearable. The story, about an elderly couple who loses their house and is forced to split up, the wife living with the family of one child, the husband with another, the two homes located 300 miles apart, because none of their children can find their way to bring in both parents, is perfectly constructed to support a series of scenes in which the parents find themselves, not ripped, but let's say delicately wrenched, from their happy home together and placed in environments where those who would ostensibly take care of them and work towards joining them back together, subtly and explicitly make them feel unwanted, in the way, a goddamn hassle. But the couple only wants to live together again."Together for always," says the old wife, Lucy Cooper (Beulah Bondi) during a rare and expensive long distance call with her old husband Barkley Cooper (Victor Moore), in one of Make Way for Tomorrow's very best scenes.
.
In some ways, Make Way for Tomorrow defeats analysis. I have no doubt that much has been written about its place in the history of the Great Depression (the Coopers lost their home to the bank, and the film was made in 1937), and still more about the film's relevance to today. But I don't care about any of that. Instead, I wonder if there have been two better performances on film than Bondi and Moore's work here. Moore's "Those places must be terrible," in reference to old age homes -- one of which he learns has been scouted out by his daughter-in-law (Fay Bainter), wife to his son George (Thomas Mitchell), with whom Lucy is staying -- is full of quietly, but barely, suppressed pain. And Bondi's whispered "I love you" as the couple takes a cab back from their last grand night out, as her husband sings an old favorite song, is as exquisitely beautiful as any delivery of those three words has ever been. And I wonder if helpless guilt has ever been more fully embodied than it is by Thomas Mitchell's George, during a crucial conversation with his mother, his body stiff and shoulders hunched, as if he's steeling himself just to get through it. Or if, as happens at the film's end, a moment of such perfect joy has ever eased so seamlessly into such crushing, inevitable sadness, in a matter of seconds.
.
There's a moral to Make Way for Tomorrow, and it's stated right up front. I urge you to watch this heartbreaking film and see for yourself what it is. And then, if God willing it's not too late, heed it.
Posted by bill r. at 1:47 AM

1. I'm always a bit thrown off when you review an older classic film. I don't know why but I think, "Why's Bill reviewing a movie from the golden age?" No reason you shouldn't, but I find it always pleasing nonetheless. Perhaps you should do it more.

2. I've never seen this and now I'm going to. Besides, Laura loves Beulah Bondi (so she's probably seen it - she knows more about movies of the thirties and forties than I do - you know, I really struck gold with her) so she'll happily watch it with me.

1) I should do more of it. I always think that myself. The truth is, I feel a bit...out of my depth, I guess, because while I watch a lot of them, I somehow don't feel like I know the era, outside of noir and old horror, as well as, say, you.

2) I'm shocked you've never seen it. You absolutely must. And yes, you struck gold.

You're off to a good start with all these reviews so far, Bill. I haven't seen this either, though I've always heard of it as the inspiration for Ozu's Tokyo Story. I really need to get around to it soon, it's been in my Netflix queue ever since the Criterion DVD came out.

I love that Seth did the art for the Criterion version, too. He seems to be a perfect fit for the film's mood.

I can't believe that, not only did I beat Greg to MAKE WAY FOR TOMORROW, but you too, Ed. My mind, she is spinning.

But yes, TOKYO STORY -- it's pretty clear once you've seen both. But the McCarey film, in all honesty, hit me harder.

I'd be much more surprised about Greg, he's supposed to be the classic film expert. Although now I'm questioning that status.

In other news, you've now gone four for four in writing about films I haven't seen here, though the Oshima film sounds really fascinating, too.

Hard to believe, right? Your description of it as a sub-Spielberg War of the World ripoff really whets my appetite for it, though.

I'd be much more surprised about Greg, he's supposed to be the classic film expert. Although now I'm questioning that status.

I've been exposed. Truth is, my wife is the one who actually sees the movies and then dictates her reviews to me. Whenever anyone is discussing a classic film on another blog and I want to join in, I call her, tell her about the discussion and then she tells me what to write. So far it's worked pretty good, until now. I foolishly thought I could wing this one on my own. I feel like an idiot!

Dear lord, this film made me weep when I saw it two years ago. It was so wonderful and so heart-snapping that my brain promptly decided to forget that I ever saw it, but reading your review made it all flood back. That "i love you" moment had me choked up, thank god I watched this by myself - if a fellow viewer had made the tiniest choking-sob noise it might have triggered an almighty howl from the depths of my rattled being.

Yes, I wept, watching it alone, while the wife was out of town. When she got back, since she's not the movie freak I am, I told her never to watch it as the film would destroy her.