Nothing in the Tank

.
That, up above, is how I feel. I simply have nothing to write about, and no will to do so even if I did. Have something to write about, I mean. So, in lieu of letting this blog lie fallow too long, I'm going to take the opportunity to post something that is not only lazy, but self-promoting. It's a link to an old post, one I like, and one that is about a film I own on DVD. See how many birds I just slaughtered? Like, nine.
.
So here it is: from the archives, my write up of James Landis's The Sadist, from 1963, entitled To Inflict Moral Insanity Upon the Innocent. I think that you should enjoy this excerpt:
.
One of the things I personally find most fascinating about the time in which The Sadist was released is not just that this was done in 1963, but that it was done in April of 1963. Cultural historians -- at least the ones with whom I have unfortunately had experience -- would be stymied by the chronology of The Sadist's filming and distribution, because, you see, cultural historians apparently believe that everyone born before they were is a total dumbshit, and the dumbshits who were adults in the 1950s and '60s (thereby having survived World War II and the Korean War, among other things) still needed the assassination of John F. Kennedy, in November 1963, to remind them that guns were sometimes used to shoot people in the head, and it was this horrifying act of public murder that allowed for the creation of films like The Wild Bunch and Bonnie and Clyde and so on and so on. I'm sure everyone reading this has seen someone making this kind of connection, but for this connection to work someone needed to tell James Landis, who was on this particular case when Lee Harvey Oswald was still greasing machinery in New Orleans.
. 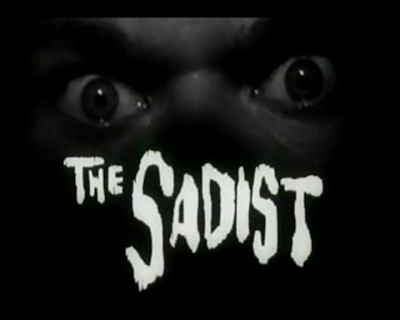 Labels: I Got Nothin', Recycling, The Collection Project, The Sadist

Yes, I do like that passage you lazy bastard. Look, we could go on and on about how much I hate the self-importance attached to the sixties (and not the 1860s when the country actually was split in two). I can't tell you how many folks have told me the 1960's was the most divided time in our history despite the above fact of Civil War.

Or the most important socially (somehow trumping the vast array of social and political uprisings across the world in the 1930's leading to the largest conglagration of human misery ever perpetrated on the planet in the 1940s).

I could tell you but I don't have to because you wrote that passage which means you already understand.

Yes, I understand. It's similar to the time I saw BRIDE OF FRANKENSTEIN in Austin and one of the hosts said "What did people make of this movie in the 30s??", in a very condescending way. What males him think they thought of it in a different way than him? People didn't suddenly learn to think in 1968. And they didn't start suffering, or living, or anything else, in 1968, either.

I've only seen clips from "The Sadist", but your pithy review has made me order it from Deep Discount. Way to go, Bill!

I hope you enjoy the movie, Anonymous.