A Duet of Collection Project Selections...

Sorry, only two today. Ordinarily, when I do these capsule reviews, my minimum is three, but today it's two. You know why? Because. That's why. 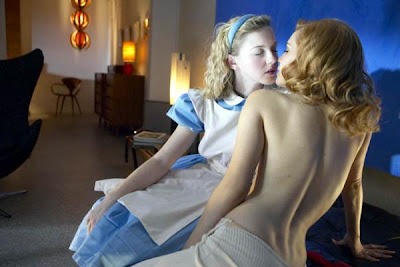 Where the Truth Lies (d. Atom Egoyan) - When you're new to the work of a particular filmmaker, and you have an experience early on that is as positive as my second outing with Atom Egoyan, a certain momentum builds up. That first experience was with his through-the-roof brilliant adaptation of Russell Banks's The Sweet Hereafter, and from that point, apparently, I was willing to follow him anywhere, from the positive (I think Ararat, for instance, is pretty underrated) to the vaguely disappointing (his oppressively artificial version of William Trevor's spare novel Felicia's Journey). Well, when you like a filmmaker, you take the good with the bad, but Egoyan's big-screen take on yet another novel I enjoyed, Rupert Holmes's relentlessly entertaining Where the Truth Lies, was a full-on clusterfuck. Holmes's murder mystery potboiler, set in the world as it's inhabited and experienced by Dean Martin and Jerry Lewis stand-ins Lanny Morris (Kevin Bacon) and Vince Collins (Colin Firth), is just a terrific read: suspenseful, funny, always engaging. In Egoyan's hands, Holmes's idea of humor is replaced by his own, and since Egoyan doesn't have the first clue about comedy, the burden is placed on poor Bacon and Firth to flail around like monkeys. Elsewhere, the film is just a slog, numbingly mannered and artificial in the same way Felicia's Journey was, but at least that film was more in Egoyan's wheelhouse, and Bob Hoskins was well-cast. Bacon and Firth come across as the first two guys who said yes.
.
And yet I own it anyway. There might possibly be certain ancillary reasons for this -- I'm too busy to try and think what those might be, but, on an unrelated note, Alison Lohman, as the young journalist Karen O'Connor who is alternately outsmarted by, and later the one doing the outsmarting of, Morris and Collins, is perfectly winning, to the point where you think maybe she's the only one involved in the film who "got" Thompson's book, which would be strange, as it's quite an easy book to "get". But even with Lohman it feels like she showed up on set determined to be a worker, and to show everyone she was a grown up, as opposed to act in a film she believed in. Also, I think it cost, like, five dollars.
.

Never Take Candy from a Stranger (d. Cyril Frankel) - This suspense film about a married couple, recently moved to a small Canadian town, battling for justice for their young daughter, who was taken advantage of by the town's elderly patriarch, comes from Hammer Studio's lesser-known stock of non-horror genre titles. And it's quite good, tackling the topic of child sexual abuse, and the broad complications, apart from the obvious, that result with more directness than pretty much any contemporary film about similar material I can think of. It also carries with it, for me, a very strong "does this remind you of anything?" vibe, particularly in the early scene when the molester's adult son (Bill Nagy) first visits the distraught parents (Gwen Watford and Patrick Allen). The son arrives cap-in-hand, full of false regret, and at one point, in a moment so believably ridiculous that you might be tempted to laugh, laments that his father briefly lost his head and "teased" their little girl. Maybe if you call it something other than what it actually is, everyone will believe it. Maybe it'll even be true. Nagy, in particular, is great at expressing a barely contained terror and helplessness that manifests itself as aggression and overwhelming myopia -- a state of mind that comes close to sweeping up the whole town. You can all decide for yourselves if this outline reminds you of any legal battle that has been in the news for the last year or so. Who am I to say?
Posted by bill r. at 7:05 PM

"Never Take Candy From A Stranger" was my fave film from that Icons of Suspense set (though I liked every one of them to different degrees). There are some terrific scenes, chilling moments and an approach that I can't really imagine being taken today. I also liked how they decided to set it outside of the U.K. so that the Canadians could come across as the baddies...Hmmph!

As for "Maybe if you call it something other than what it actually is, everyone will believe it. Maybe it'll even be true......You can all decide for yourselves if this outline reminds you of any legal battle that has been in the news for the last year or so.", it reminds me of pretty much every political pundit/opportunist out there with their agendas and little regard for trying to find real solutions - left or right wing.

With the G20 about to begin in my backyard, all sides of the, ahem, "debates" have been pissing me off of late. Douchebags, all of them.

Though not as much as Greg of course...

Wow. Never heard of Never Take Candy from a Stranger. A Hammer film set in Canada!? I'll definitely have to check that out. Was it actually filmed here as well?

Bob - I was actually thinking about something a little more specific, to do with someone guilty of a similar crime as the old guy in the film, but has quite a few supporters anyway. But yours works, too!

Walker - No, it was filmed in England. Come on, they're not perfect!

I'm being quite dense. I'm a news junkie, but I still can't figure out which case you're referring to.

Also, if you want to fall in love with Egoyan all over again, I strongly recommend EXOTICA if you haven't seen it. Great performances by Bruce Greenwood, Mia Kirschner, Elias Koteas, and Don McKellar.

Exotica is easily my favourite Egoyan, but I haven't seen his last few. I haven't heard much that would make me think I would rank them higher.

Bill, sorry about my rant-iness. I knew you weren't on a political topic - it was just a timing thing. This whole G20 thing has made me a grumpy boy.

As for what you were really talking about, I won't get too frantic about figuring it out...

Forget it, Tony and Bob. It's Chinatown.