The Collection Project: Burma's a Warzone 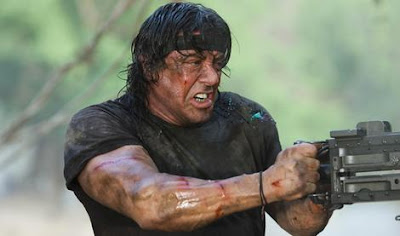 I'm not going to say very much about Rambo (d. Sylvester Stallone), because there's not much to say. But with all the talk floating throughout the internet about Stallone's upcoming The Expendables (has that title really never been used before? If not, it's a great one, and should have been), I just thought I'd point out that oh, how I do love this film. Rambo, I mean. My brother describes the ending this way: "Rambo gets on the .50 caliber and fires it until the movie's over." This nicely summarizes why it's such a good movie, I feel, but a lot of people disagree. Rambo is racist, they say. Or it something something violence doesn't solve anything.

But when did it become true that an action film's villains had to be the same race as the filmmaker, or else the movie is racist? And when did people stop going to movies at least partly to get a visceral thrill out of watching truly, bottomlessly evil people get blown all to Hell? When did this become a matter of such self-righteous chin-rubbing?

Labels: I Like Watching Bad Guys Getting Shot, Rambo, Sylvester Stallone, The Collection Project, The Expendables

I'll be a movie dork and actually add something artsy, because I actually think the ending bookends First Blood nicely. I think some time I'd like to watch just those two as an evening.

For the record, I've watched Rambo three tmes and I love when the heads explode in the hale of gunfire. The first time I saw it, all I could say was "Holy shit!"

PS: I think it's a far better film than the three earlier Rambos.

Flickhead, I like when Rambo opens up on that truck, and it's like an arms-n-legs bomb goes off.

The best part is after all the shooting is done. As he observes the carnage—he's just singlehandedly massacred an entire army—he reaches over and rubs his shoulder. It's a bit sore.

Love this movie. Stallone shows more introspection than one gathers from just a single viewing. And Neal is on point with the bookend, a perfect ening to the franchise (please, don't make another sequel Sly... this one was already flirting with overextension).

Bill, see FIRST BLOOD before you read the book. IMHO the book is different enough to color your opinion on the film.

RAMBO III is also of interest due to the sad reversals which have changed our fortunes in Afghanistan (I even faintly remember a credit at the end of the movie thanking the Taliban... am I just imagining it?).

Walker - He was probably thinking "Man, what the fuck? Did I sleep on it weird, or...?"

Tony - Well, I may follow your advice, I don't know. That's not my preferred order, but maybe.

"...thanking the Taliban...am I just imagining it?"

Holy shit! Jesus, I hope so!

First Blood remains my favorite, although there could be a fair amount of sentiment involved in that.

Rambo: First Blood Part II and Rambo III are pretty artless, although the former is more than a little entertaining.

But certainly I'm tempted by Flickhead's conclusion... although even without sentiment, I'm not sure I'd consider Rambo a "far better movie" than First Blood, but I'm willing to consider a tad better.

I had to chime in and add to the love. That first kill with the .50 calliber, where he shoots the guy a foot from the barrel, is just pure poetry. And I have an enormous affection for the whole "Aging Gunslinger Takes Up Arms One Last Time"/"You Ain't Gonna Build No Reputation Offa Me, Youngster" genre.

FIRST BLOOD is one of my very favorite action movies and holds about as much rewatch value for me as any film I can name. Dennehy, Caruso back when it seemed he was destined for a career as an interesting character actor, Crenna leaving teeth marks on every last inch of scenery ("He can EAT things that'dmakeabillygoat PUKE!!!), etc.

I keep wanting to make myself look smart by saying my most anticipated film of the year is something I read about in Film Comment's coverage of the Berlinale, but I am positively giddy at the prospect of THE EXPENDABLES.

God, this movie's so good! You guys 'member when he shoots that guy through the head with the arrow, and then the guy falls on the mine? That was so tough!

As much as I hope THE EXPENDABLES is great, I am a little nervous. Something about it feels uncomfortably gimmicky, whereas felt completely pure. I'm definitely looking forward to THE EXPENDABLES, but I'd rather not get ahead of myself.

I highly recommend listening to Stallone's commentary track on the RAMBO DVD: he talks about not figuring out how to direct the flick until he realized he should direct it as if John Rambo was directing it--twitchy and psychotic.

I have high hopes but not baited breathe for The Expendables: it almost looks too good to be true.

I'm afraid I've only seen the first one, the one with "First" in the title, so I can't really add much here. This goddam collection project needs more movies I have in my collection that I can comment on. I'll send you a list so you know what movies to do from now on.

I have no idea what you're talking about.

Honestly, I think I've been pretty timid so far in my choices for this collection deal. Or, actually, I've been pretty lazy, with the result that the choices have been timid. I do plan on working on that.

Ah, but have you seen FLOODING WITH LOVE FOR THE KID, the one-man, one-apartment adaptation of First Blood (the novel) that Matt Zoller Seitz was praising a while back? It's fan-freaking-tastic.

I like the older Rambo films well enough as brainless entertainment, but I have to take an opposing attitude here. This was one of the most amazing wastes of an hour and a half of my life I've ever had in a life of movie watching. Utter, unredeemable shit. Quality and his movie are as far apart as the Earth is from Betelgeuse.

Fuzzy - I have no idea what you're talking about...but you've intrigued me no end.

Rod - What I'm getting from your comment is that you wish RAMBO had been twice as long. I agree!

Tony -- the Taliban as we know them today didn't really come together until the mid-90s. The word taliban simply means "students," so it's possible it was another group.

I finally saw this a couple weeks ago and loved it. Also: for as over the top (Over the Top!) as the .50 cal scene is, it's probably one of the most realistic portrayals of that weapon I've ever seen. I only fired 15 rounds from a .50, and it's horrifying how powerful (and loud) it is.

I stand corrected Adam. I should also correct myself and say that the actual credit thanks the people of Afghanistan, not the Taliban.

My overall point is the same, "My how things have changed."

I highly recommend tracking it down! It starts out seeming like a joke, and gets better and better as it goes on, to the point where it makes First Blood seem like a much less interesting adaptation of the novel.