.
King of the Ants (d. Stuart Gordon) is a strange movie, even by the standards of the man who also directed Re-Animator and Edmond. Based on a book (which I haven't read) by actor/screenwriter/cult English novelist Charles Higson, it's a crime story, of the type that features no policemen, only criminals. It stars Chris McKenna (who is quite good here) as Sean Crawley (crawl-ey, because of ants), a drifter and doer of odd jobs who appears to win the approval of fellow house painter Duke Wayne (George Wendt). Duke senses a certain level of amorality in Sean, and takes him to Ray Mathews (Daniel Baldwin, looking and sounding at times so much like his more famous brother as to make any difference negligible), a shady businessman who susses out the same level, if not more, of amorality in Sean as Duke did, and pretty soon Sean has been hired by Mathews to follow around Eric Gatley (played seemingly out of nowhere by Ron Livingston, of Office Space and Band of Brothers) and report back on whatever it is Gatley's up to.
.
What Gatley's up to is investigating malfeasance, as practiced by Ray Mathews and his company, and Gatley is pretty soon so close to blowing the lid off things that Sean comes home one night to find Mathews, drunk and waiting outside his apartment. Mathews makes it clear -- in a monologue beautifully delivered by Baldwin -- to Sean that what he'd like to happen now, is he'd like Sean to kill Gatley. Sean negotiates a fee, and says okay.
. 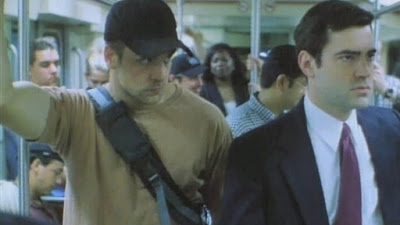 One of the things that's strange about King of the Ants, at least as a movie, if not as a part of the crime genre, is that Sean Crawley is given no background, no history, and no psychology beyond what we can glean from this story. This makes his very easy, though nervous, acceptance of the occupation "hitman" a little jarring for some. I've seen this specific complaint -- I thought he was a normal guy, why'd he find it so easy to kill that person, why doesn't he feel guilty, people don't do that -- leveled at similar stories before, such as Scott Smith's novel A Simple Plan (which was the source of the Sam Raimi film). What I might suggest is that if you find yourself unable to understand how anyone could find themselves in any way capable of killing another human being for money, then this is a good thing, and shows you have a good, basic moral foundation. I would also suggest that stories like A Simple Plan and King of the Ants aren't about you.
.
Now, while Sean does agree to kill Gatley because he sees dollar signs, it's pretty obvious that he's never killed anyone before. The scene in which he does kill Gatley is, I think, a small masterpiece, and one of the most gut-churning of its kind I've encountered. "Gut-churning" not because it's particularly graphic, but because Sean is so inept and terrified -- the fact that he doesn't know what he's doing would count as a mark in his favor, if he wasn't going ahead and doing it anyway. He kills Gatley in Gatley's own kitchen, using whatever comes to hand: a statue, a flower pot. He does whatever he can to keep distance between himself and his horrible task. When he first greets Gatley, the man is wearing a hat, which flies off in the ensuing violence. When Gatley is lying on the linoleum, immobile but conscious, Sean asks (rhetorically) "Where's your hat?" He needs the hat, we learn, so that he can put it over the poor man's face (and therefore not have to look at it) before tipping the refrigerator over onto him.
.
The entire stock of morality, or almost all of it, of King of the Ants can be found in this section of the film. Everything that's especially complex in that regard -- it's always unnerving when an audience finds itself wishing the killer would just grab a knife or something, so that the victim could be more quickly done away with -- is concentrated here, and when Crawley doesn't collapse from guilt, but instead aggressively, but naively, pursues the money he was promised, Gordon and Higson ditch any idea that Crawley might somehow be salvageable. The idea that he might not be the worst person on screen is soon given quite a lot of weight, but it's a little hard, while watching what follows, to forget that refrigerator crashing down, followed by Crawley saying "Where's my money?"
. 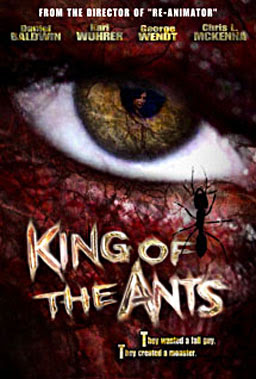 What follows, by the way, is much more strangeness. As the director of Re-Animator, From Beyond, Dagon and so on, Stuart Gordon's reputation rests primarily on his career as a subversive, low-budget, gonzo-practical-effects-and-make-up horror filmmaker, and a loose adapter of a number of H. P. Lovecraft stories. Minus his early effects collaborator Brian Yuzna, Gordon is nevertheless still able to work some Brian Yuzna-esque magic on King of the Ants, when Mathews, who never really wanted to pay Crawley the $13,000 he promised, decides that the best way to deal with this suddenly annoying loose end (Crawley has worked it out so that if he dies, evidence that incriminates Mathews and his crew will go to the police) is to take him out to his ranch in the desert, and, along with Duke, Carl (the late Lionel Mark Smith, one of David Mamet's regular ensemble, and friends with both Gordon and Wendt from their Chicago theater days) and Beckett (Vernon Wells, "Wez" from The Road Warrior), beat the shit out of him with golf clubs until he turns into a vegetable.
.
The first time I saw King of the Ants, this plot development was tough to swallow. Watching it again, it became easier, for a couple of reasons. One, is that I could see it working, and the other is that in the film it doesn't work. The strangest thing of all of King of the Ants's strange things is how much stuff it tries to cram into its last third. The torture of Crawley -- and the ensuing, rather alarming, hallucinations, which feature Kari Wuhrer as Gatley's widow doing all sorts of bizarre and horrible things, and looking all sorts of bizarre and horrible ways -- are the film's centerpiece. When the film breaks away from that, it becomes a revenge story and a romance, all in about a half an hour. Now consider that the object of Crawley's romance is Kari Wuhrer, and that he doesn't even meet her until that last half hour has begun (his previous hallucinations were fed by having seen her on the news following her husband's murder). It becomes tempting to think that King of the Ants might have benefited from a little streamlining. Adding to my list of gripes is the fact that one major character dies from an injury that at worst should have made them wince a little, and possibly want to lie down for a bit (I have a similar complaint about Michael Winterbottom's recent The Killer Inside Me, but that's for another time), but here causes instant death. King of the Ants isn't aiming for naturalism, but that's no excuse for the filmmakers to say, as I suspect they did here, "Fuck it, nobody'll notice, nobody cares."
.
Even so, Gordon's film does manage to pack the kind of skinned-alive jolt that similarly problematic low budget films like Combat Shock and Maniac (both, also, for another time) did in the 1970s. The presence of so many familiar faces in King of the Ants does sort of rob it of the experience audiences had with those earlier films, one that led them to question what the fuck they were watching, and why the fuck they were watching it. But that's not the kind of thing I'm apt to hold against any film, and don't hold against this one. If nothing else, King of the Ants is one of those movies that almost nobody has ever heard of, so the likelihood of it being rented out of blind curiosity by any number of people ("Dude, George Wendt is in this!") who then find themselves completely blindsided by the resulting insanity, is fairly high. That's a rare enough thing these days.
Posted by bill r. at 2:29 PM

I love this movie. I'm really fond of nearly everything Stuart Gordon's done, but this one always stands out for me. I should revisit it soon.

I like it too, but it IS a little sloppy. But I guess if it wasn't, it wouldn't be a Stuart Gordon movie, and wouldn't have quite the charm. I'm not sure "charm" is the word I want in this context, but what's done is done.

Chunks of this film have really stuck with me. Like the Livingston murder- you're dead-on about that scene. I think I read or heard somewhere that Livingston is in the film because one of his first jobs in LA was working as an assistant for Wendt and they forged a friendship.

I seem to recall that Vernon Wells ends up one of the more sympathetic characters in the film- a sliding scale to be sure. I recall imdb-ing him after watching it and being shocked to find that he was Wez. I adore THE ROAD WARRIOR- I think it's the best action movie ever full stop- and Wez has always just scared the crap out of me.

There was something else about Livingston, though -- I seem to remember something mentioned in the commentary track about him being unhappy with...something. I probably shouldn't commit to that memory until I've listened to the commentary again.

I was shocked to learn that was Wez, too. And Beckett is more sympathetic than pretty much everyone else, but only sort of. He doesn't take part in the torture, but he doesn't seem to care much that it's happening.

I'll get to COMBAT SHOCK. I don't exactly love it, but it's an interesting artifact, or something.

Wow, I'm a big Gordon fan and this film... well, it just slipped under my radar. Thanks for discussing it. It sounds fascinating.

Yeah, Tony, this one didn't seem to cause a great deal of ruckus, even among people who you'd think would normally keep an eye on Gordon's comings and goings. Maybe because it's not horror (although it's occasionally horror-like)? EDMOND isn't horror either, but that had Mamet's name, and a loony cast, to get it noticed, but KING OF THE ANTS just...poof. I don't think I even read about it myself. I think I just saw the box at the video store, and it piqued my interest.