The Collection Project: From Here On In, I Rag Nobody 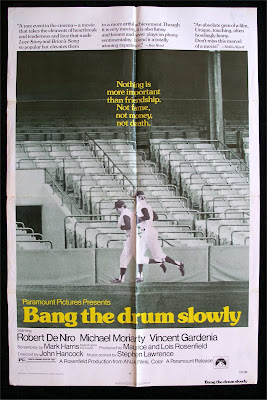 There are moments in Bang the Drum Slowly (d. John D. Hancock) that, frankly, I don't even like to think about. Structured around a fictional professional baseball team's season, the film features Michael Moriarty as Henry Wiggen, the pitcher, and a young, then-unknown Robert De Niro as Bruce Pearson, the team's clumsy, friendly, hayseed catcher who, early on, is diagnosed with Hodgkin's Disease.

What's so affecting about Mark Harris's story (he wrote the script, as well as the source novel) is that it doesn't play as a "disease" movie, because for most of it's run-time, only a few people know of Pearson's condition, and, due to the fact that he is both clumsy and a hayseed, the catcher is ridiculed by many of the other players, and kept outside any cluster of friends within the team. Wiggen, as the team captain, does know what Pearson is going through, but can only shield and protect him so much.

At one point, the team is in the locker room, and Piney Woods (Tom Ligon) whips out his guitar and begins singing "Streets of Laredo", which, if you don't know the song, is about a dying cowboy, and includes these lyrics:

Oh, bang the drum slowly, and play the fife lowly
And play the dead march as you carry me along
Take me to the green valley and lay the earth o'er me
For I'm a poor cowboy and I know I've done wrong

At this point, it's become impossible to hide Pearson's illness from the rest of the team, and some of the players, including Wiggen, try to get Woods to stop, without indicating to Pearson why ("Try a different song" "Yeah, I don't like that song" "It's a cornball song!") without making him think more about the lyrics than he's going to anyway. Woods doesn't get it ("Why don't you join in a little, like they do, you know?") nor do some of the other players ("It sounds good!"). Alternately, the camera pushes in on Woods, and on Pearson, who De Niro plays, at this moment, as embarrassed more than anything else. He knows that, as the song lilts by, everybody is thinking about him, and his fate, and he'd rather everybody just act like a baseball team.

But the moment that absolutely destroys me is in the final game in the film, which the team is winning. They need one out, and Wiggen throws a pitch that results in a pop-up between homeplate and the pitcher's mound. Pearson rises, but loses the ball, and turns around in confusion, and exhaustion, while another player (Danny Aiello) swoops in to pick the ball out of the air. This sequence, shot in elegiac slow motion by Hancock, ends with the team celebrating, oblivious to Pearson -- who, since learning he's sick, they've collectively taken under their wing -- still standing there, a bit lost. Except for Wiggen and Coach Jaros (Phil Foster), who push through their teammates to pick up Pearson's helmet and glove -- marching together, and bending down almost as one -- and pat Pearson's back and bring him back into the fold.

I've tried several time to describe why I think this moment is among the most beautiful and heartbreaking I've ever seen, but I'm finding it very difficult to do so without making it sound like a cornball song. Just watch the film.

Bang the Drum Slowly was released in 1973; a few months later it was followed by Mean Streets, and De Niro blew up. Michael Moriarty's career would travel several strange paths before an apparent flame-out. Twenty-seven years ago, they co-starred in one of the great sports films of all time, one I can't watch without crumbling. And the film ends with a line I've tried to use as a guide for my behavior, though I imagine, ultimately, I've been no more successful than your average guy. Those words form the title of this post: "From here on in, I rag nobody." If ever there were words you could live by, that's them.
Posted by bill r. at 8:45 PM

Bill - I haven't seen this since it was first released, but I do remember this scene. And is my memory playing tricks on me, or does it cut directly from that game scene you describe to Pearson's gravesite service? I just remember seeing it with a friend who gasped and started to sob at a quick cut to a graveside scene.

This film tore me up when I was a teenager and I'm sure it would do the same today.

Not quite, Pat. After the game, the film moves briefly to a "farewell" scene, when Pearson is going back home, with the unspoken understanding that he doesn't have much time left. Then it's the gravesite.

Bang The Drum Slowly is one of my favorite movies. Bless you for your good heart.

Love the movie .. spot on commentary

Excellent post. And your viewpoint is exactly the same as mine, as I type through tears, having just watched it...

The shot of Henry Wiggen (birthday July 4, by the way) and Joe Jaros stooping in unison to pick up Pearson’s glove and mask is superb: like Prince Hal and Falstaff joined in a bow to mortality.