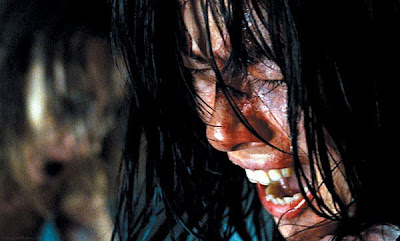 A young girl named Lucie escapes from...somewhere. We don't know from where, or from what, but her hair has been hacked off, she's dirty, and has clearly been beaten. She's picked up by some sort of orphanage/children's hospital, though her parents apparently cannot be tracked -- we get the sense that she wasn't running from them -- because it is here that she will stay.
.
Then we see a house, and are told this is "Fifteen Years Later". A family, consisting of a mother, father, and a teenaged son and daughter, is gathering for breakfast. The mother has found a dead mouse in the plumbing, and says this explains the low water pressure. The daughter has taken a private letter from her brother, a letter from a girl, and is teasing him about it. The mother also mildly berates the boy for his indecisiveness and middling school achievements. Then the doorbell rings, and the father answers it. A young woman is there. She shoots him with a shotgun, and then stalks through the house, blasting away at the rest of the family, killing them all, but pausing, after the parents have been killed, to ask the boy "Do you know what your parents did to me?" He says he doesn't, but he, and his sister after him, are both blown to hell just the same.
.
So begins Pascal Laugier's Martyrs, one of the most notorious recent horror films, and part of what some critics are calling the New French Extremity, a movement -- if such it is, which it probably isn't -- that also includes such odious films as Inside and Frontier(s) and genuinely good ones like Fat Girl and Trouble Every Day. What all these films have in common, besides being French (or French-Canadian, or Belgian) is a commitment to showing the viewer the most grotesque, horrifying, disgusting images imaginable, and to do so unflinchingly, with a minimum of gaze-aversion, as well as the atmosphere and examination of whatever world-view such images might imply. As with any genre, or subgenre, or artistic movement, the success of the New French Extremity as an idea is neither important or even calculable. If Claire Denis's Trouble Every Day is an exceptional film -- and I think it is -- but Inside and Frontier(s) are terrible -- and I'm very confident that they are -- Denis's film doesn't suddenly appear to me to be invalidated because the movement into which some critics have lumped it also contains a fair number of films I despise. I don't think "I thought Trouble Every Day was pretty great, but I sure wish it wasn't part of that whole New French Extremism thing they got going now." All of which is to say that I do my damndest to approach the films that fall under this particular umbrella with a mind that is at least partly open. And if the beginning of Martyrs, as described above, signalled anything to me, it was that something possibly interesting was up.
. 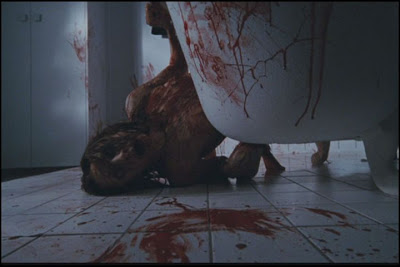 The young woman is Lucie (Mylène Jampanoï), and her girlfriend Ana (Morjana Alaoui), whom she's known since they met at the hospital, is parked nearby. Ana is shocked to hear that, upon confirming that the husband and wife are the same couple who abused her in her youth, Lucie has simply slaughtered them, instead of calling the police, but Ana goes to the house anyway, where the two women go about disposing of the bodies, and, not incidentally, stumbling over the truth of why Lucie's abuse took place. Getting to that point is a relentlessly grim, shocking, unbelievably violent trip, one that made me far more uncomfortable than just about any other film of its type ever has. Martyrs is a chronicle of almost never-ending suffering and bizarre imagery, to the service of a story that regularly drops out from beneath you.
.
Here's the problem with Martyrs: its story ends in a very unusual place (not so unusual that it's never been done before, as anyone who's read Lucius Shepard's The Golden knows, although Shepard actually didn't do much with the idea his story shares with Laugier's film, as in his novel that wasn't the focus), the point where we learn what, exactly, all this mind-numbing suffering has been in aid of, and why the film is called Martyrs. It's difficult to talk about that revelation -- an appropriate word -- without ruining any sense of mystery for those who haven't seen it. And the film really does maintain an air of pretty dreadful mystery, one it actually pays off, which is such a rare thing that blithely exposing it is not something I'm willing to do.
.
But the problem, as I was getting ready to say before losing track, is how seriously can I ultimately take the film as a whole? A certain amount of Martyr's sadism is actually justified, but there's also a chunk midway through when Ana encounters a woman who has suffered the kind of torture Lucie did as a child, but worse, and for a much longer period of time. This sequence provides several of the film's most awful images, and it also goes absolutely nowhere. It's a red herring, a waste of ten minutes or so that did nothing but provide the film with more peeling flesh, screaming, pain, blood and bone. Like Inside, Martyrs never stops to breathe, and while I can't claim to have felt desensitized by the violence as Martyrs built to its viscera-splashed crescendo, it was also a little bit difficult to view it with the same amount of weight it would have had if the film had let up for even three goddamn minutes (another for instance: one character dies twice, when once would have been plenty).
. 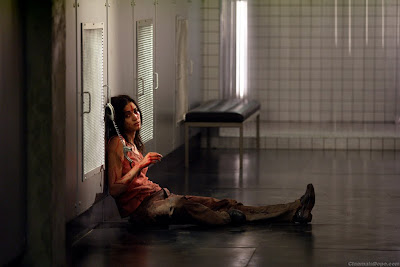 And yet: the ending is not nothing. This is a modern horror film that is pretty much wall-to-wall butchery, but is, finally, not actually about wall-to-wall butchery. Or so it seems, or pretends, or something. Hence my ambivalence, and hence the title of this post, "Keep Doubting", which is a line from the film -- a good one, too, in context -- and also a sort of philosophy for viewing the films of the New French Extremity and their international kin. Like the "splatterpunk" wing of horror literature, this kind of film usually comes presented as a work of intellectual and moral rigor, when in fact they're often blatantly unpracticed in both arenas. But then again, sometimes they are. It helps to be able to tell the difference. When it comes to Martyrs, I'm not sure I can. Still, at least I'm wondering about it.
Posted by bill r. at 5:37 PM

I was intrigued and disgusted with Martyrs, but in the end, it didn't work for me. I think it's trash, and so its self-seriousness only makes it worse. Or, I guess if I had bought its philosophizing, it would have elevated the film, but as I didn't, it sunk it.

I think Frontier(s) is junk, too, and not even particularly scary or disturbing.

I liked Inside, though. I didn't review it, and I wish I could make a persuasive case for it, but that would require a second viewing, and I'm not sure I want to do that. Why did you find it so awful?

I also like Trouble Every Day, though I never thought to put it in the same extreme category, perhaps because it has more in common with Denis' other work than I think it does with Inside, or High Tension, et al, and also predates this newer wave of French horror films by a good chunk of time. I agree with your general point, though, about hyped-up cinematic "movements."

I liked Martyrs a lot, except for the ultimate justification of the whole thing, which struck me as beyond flimsy in more ways than one. That didn't ruin the impact of the rest of the movie for me, though. But I agree in this case that the material might have benefited from some variations in intensity and pacing. It does all get to feeling a little one-note pretty fast, but it's one note played exceptionally well (if that's possible).

Trouble Every Day was good, too, and I think I even liked Frontier(s) a little as well, as a totally disposable but gruesome shocker that's perfectly willing to shock (unlike the play-it-safe gimmick-fests of the Saw movies, et al).

Too more movies I'd throw into the mix here are Sheitan, featuring a memorable psycho turn by Vincent Cassel, and Calvaire, which is probably the most technically impressive of the bunch for me, with it's almost Hitchcock-like deliberate pacing.

Schloofy, the philosophizing didn't actually sell me -- the line about martyrs "taking the sins of all the world on their shoulders" doesn't actually mean much of anything in the context of the film -- but rather how it all played as a story, and, in particular, the last couple of scenes. I also sort of thing that if a film is going to be this wretchedly gruesome, it had better have something serious on its mind.

I link to my INSIDE review in this post, but, basically, I thought the filmmakers got all giddy when reading about pregnant women who'd been murdered and had their babies ripped from their wombs, and thought "What a great idea for a slasher movie!" The whole thing was just a sick pose.

I didn't lump TROUBLE EVERY DAY into this group (called "New French EXTREMITY", by the way, so I'll have to change that) -- a critic named James Quandt did that in an article for ARTFORUM.

Dr. J - The justification was, for lack of a better phrase, my favorite part, or at least where the torture and the motivation for it finally end up. It's flimsy in the sense that it wouldn't happen in reality, but there is a kind of philosophical basis for it all (although the "young women" thing is just arbitrary).

I liked CALVAIRE, too. I'll be writing about that one at some point -- who knows when -- but I think that's a pretty interesting movie. Not great, and it seems to me to owe too much to too many other films, but it's a movie I haven't been able to shake in the many years since I first saw it. I liked Du Welz's follow up, VINYAN, very much, as well, but it doesn't belong in this category.

Sounds intriguing, but I'm so averse to sadism on film I can rarely stomach watching a film with such a quantity of it (Greenaway and Pasolini are two notable examples).

So I went and read a spoiler-filled summary online, and I'm not sure they explained it well enough for me to completely get it. I'd appreciate it if you could explain the revelation you left out in an email if you are so inclined.

Tony, I sent you a message on FB.

How come you didn't send me a message on Facebook?

Because that's all you care anout Greg. I sometimes think the New French Extremity doesn't matter to you at all!

I care anout a lot of things.