There'll Be Nothing to Laugh at This Time 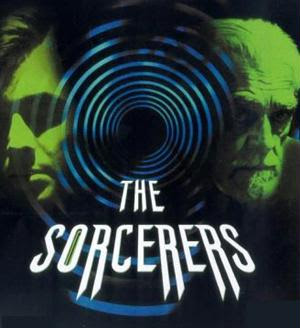 On February 11, 1969, one of horror cinema's most interesting filmmakers died at the age of 25. His name was Michael Reeves, and during his short life he made three features: The She Beast (1966 - known as Revenge of the Blood Beast in the UK); The Sorcerers (1967); and Witchfinder General (1968). The She Beast is available to rent from Netflix, and Witchfinder General was released on DVD by MGM earlier this, but The Sorcerers, despite starring Boris Karloff, is still unavailable in America, and has, in fact, never been available here. It seems to never turn up on cable, and although it has had a DVD release in England, that has since gone out of print.

I can't pretend to have any interest in the intricacies of the legal mudpit into which the video rights for this film are sunk -- whatever the story is, it would no doubt anger and bore me in equal measure. All I care about, especially after checking out Witchfinder General for the second time in about a decade and finding it to be absolutely terrific, is the damn film itself. I just want to see The Sorcerers. It seems like such a small thing to ask of the universe.
Well, the universe finally gave me the thumbs up on this one. My wife and I own a region-free DVD player, though we've put its primary selling point to almost no use up to now. But while dicking around on-line the other day, I found a copy of the out-of-print UK DVD of The Sorcerers for sale at an extremely reasonable price. Click, click, done. The movie arrived today, and I finished watching it about an hour and a half ago.
Boris Karloff plays Professor Marcus Monserrat. At the beginning of the film, he is trying to drum up business for his hypnotism business, which has fallen on hard times, we learn from Monserrat's wife Estelle (Catherine Lacey), since a reporter started poking around, and printed some unflattering things about Monserrat. As a result, the Monserrats are in dire financial straits, and are just barely sc 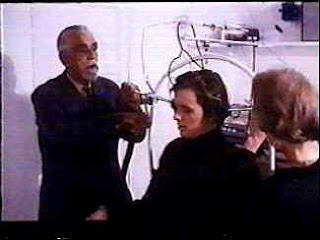 raping by. Even so, subsisting seems to be a secondary concern for the old couple -- Prof. Monserrat has another project brewing that he's finally ready to test out. He's built a machine that, when attached to a person and turned on, will subsequently give both of the Monserrats the power to control the thoughts and movements of the test subject whenever they want to. The sort-of-hard-to-buy point, and ultimate function (according to Marcus), of this machine is to allow elderly invalids to experience full, exciting lives vicariously through those young people who agree to connect themselves to such customers, via the professor's machine.
They need a volunteer for their test, and both Marcus and Estelle agree that a prime candidate would be a young person who has become bored with the free-living ways of the late 1960s. They find such a candidate in Mike Roscoe (Reeves favorite Ian Ogilvy), who Marcus runs into one night, and who, it must be said, is talked into taking part in this mysterious project incredibly easily. Once the experiment has been successfully conducted, Mike is sent away by the Monserrats, who marvel at the physical sensations they experience -- running water on their skin, cuts on their hands -- as their young surrogate goes about his daily business. But Estelle wants a bit more. She's tired of living off next-to-nothing, and wants to get back a little of what she and her husband lost, before turning the machine to its more altruistic uses for which Marcus built it. Marcus doesn't like the idea, but concedes to his wife, because he can see how unhappy she is. So they use Mike for some cheap, essentially harmless thrills. And still, Estelle wants more, she wants things that her husband finds horrifying, but her will, and her control over Mike, is stronger.
It's funny: when I first heard of The Sorcerers, I wanted to see it because of Boris Karloff. Later, more recently, I wanted to see it for Karloff, and because Reeves made it. But while Reeves does a fine job with unusual material, and Karloff -- solid as ever -- is the marquee name, and Ogilvy is ostensibly the hero of the story, the film belongs to Catherine Lacey. I don't believe I've ever seen her before, but her performance is about as creepy as anyone could possibly want it to be -- Reeves gets more mileage out of quick shots of her grinning face than most horror filmmakers can manage out of an hour and a half of beheadings. Estelle's turn from seemingly ordinary, but grinded-down, old woman to blood-crazy thrill-killer happens pretty 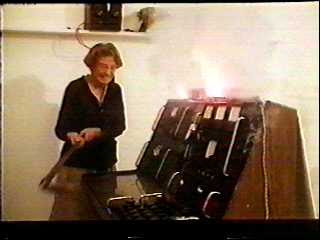 damn quickly, but by keeping everything as simple as he can, Reeves makes it possible to believe that Estelle can go that route. All that needs to happen is that Catherine Lacey has to be able to play it, and good God, does she play it. She plays it big when she has to, while throwing in odd, skin-crawling little touches here and there to make the character seem like she really draws breath, my favorite being the moment when, after forcing Mike to do something particularly awful, Estelle slumps over in exhausted laughter, her forehead resting on her clenched fist, as if she were suddenly overcome with relief after hours of intense worry. But again, Reeves helps things along: his decision to follow up a sequence involving a night full of violent frenzy with Estelle spending the morning after in bed, hammered on a bottle of gin, was a brilliant one.
As I believe I hinted earlier, this movie is not without its flaws. The machine Monserrat built makes very little sense (and I don't mean scientifically, because who cares about that?), and there seems to be a gap between what the Monserrat's told Mike about the experiment and its results and how he deals with the aftermath. But the story taps into the same primal idea as Stevenson's The Strange Case of Dr. Jekyl and Mr. Hyde, which, like The Sorcerers deals with, among other things, the question of what keeps most people from doing horrible things to others: morality, or the fear of repurcussions? And while the film's climax may be easy to predict, it's no less effective for that. Above all, though, this film has going for it the Monserrats -- old, feeble, decent and deluded Marcus, and his loving wife of many decades, Estelle, who, one day, is given utter freedom from her fears, and a freedom to indulge her every taste. Marcus is terrified and disgusted by what these tastes turn out to be. Estelle, no doubt, is surprised herself. But she's not disgusted. Far from it.
Posted by bill r. at 10:58 PM

Interesting review, Bill. Horror movies like these are a lot of fun, and I've always been a fan of old sucking the life out of the young.

In keeping with this theme, Marilyn Monday will focus on a beauty is a lot older than she looks: frequent vampire player Kate Beckinsale.

Thanks. Marilyn. I'd been waiting a really long time to see this movie, so I'm glad I wasn't disappointed. If anyone else with an interest in horror, and region-free DVD player (and especially Michael Reeves) can find a cheap copy of this, I recommend they jump on it.

Kate Beckinsale it is!

I have a region-free DVD player, too, and like you, I have barely used it.