My War with John Updike

Any artist worth a damn is going to make enemies. Being an artist who is worth several damns myself, I have, in turn, made several enemies. Most of these individuals have taken issue with me and my work on political or religious grounds. Knowing that people who dislike me for these reasons exist somewhere in the world and are currently speaking ill of me -- whispering about me in hypocritical hisses -- does not bother me in the least. Quite the reverse! As I may have mentioned before, I am an artist, and as such one of my responsibilities is to inform people when they are thinking incorrectly, and instruct them to adjust their beliefs and opinions accordingly. I don't ask for thanks -- I'm happy to do it, really -- and I don't expect everyone to appreciate my unique brand of acidic truth-telling. I'm comfortable weathering that particular storm.

However, over the years I have somehow managed to make another kind of enemy: that of the aesthetic variety. Or, at least, they claim their problems with me stem from an objective dislike of my art, but I have my suspicions that these specific bushes of vitriol have roots that run deeper, into their hearts and psych 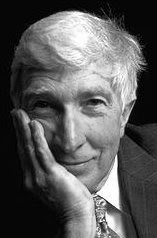 es. But that's neither here nor there. No, today I want to offer a rebuttal to the extraordinarily harsh -- but, of course, ultimately inconsequential -- words directed towards me and my life's creative work by a man who is generally regarded as one of America's "greatest" "writers", John Updike.

One year ago, I published a collection of my monologues. Currently and inexplicably out of print, the title of my collection was (is!) Speak Up! Speak Out!. In an especially brief review of the book published in The New Yorker, Updike said the title should be “Rampaging Tedium”. He also went on to say that “clearly, we are dealing here with a third-tier Eric Bogosian, as if a first-tier Eric Bogosian was somehow worth our time.” Okay, hold it right there, Psoriasis. I once wrote an appreciation of Eric Bogosian (I’m still looking for the right place to publish it) in which I said “Eric Bogosian is not just our country’s Dario Fo: he’s Dario Fo wrapped in the skin of Lenny Bruce and infused with the hot-wired, kick-ass, rage-filled savior-soul of Bill Hicks. He writes like a gutter-dwelling angel from Hell on meth!” If Updike doesn’t think someone like that is worth his time, then maybe he should go back to reading his precious Chris Bohjalian novels, or whatever the hell he reads.

Then, Updike pulls this card: “Mr. R.’s collection is a bewildering 23 pages long; the book costs an offensive fourteen dollars. That's nearly fifty cents a page.” First off, thanks for the algebra lesson, Dr. Math. Second, this is what Updike has been reduced to? Whining about how much books cost?? Whatever happened to the guy who wrote Rabbit Re-Do and The Vampires of Eastwidge? Those were pretty big books in their day, I thought. Plus, it’s not like he can’t afford it. Last I heard, Pulitzer winners rake in some pretty sweet coin.

Later, Updike blathers thusly: "Mr. R. seems to think that simplistic speech-making is the same thing as good writing. And by simplistic, I mean 'depressingly ignorant'. I have a hard time imagining even the most knee-jerk, closed-off college student would find much worth in what Mr. R. has to say in these pieces. That in itself might be forgivable, however, if the writing itself rose even an inch above worthless cliche', but it never does. He's happy to wallow in the endlessly worked-over sludge of the amateur polemicist." When I read that part, this is what I said: "Huh?" Literally, that's what I said. Since I'm sure you're just as confused as I was about what Updike thinks he's saying here, allow me to translate: "I'm too old! I don't understand! I'm on my way out!" Updike is terrified because he's part of the Old Guard, and us Young Guns (as I like to call artists of my generation and general thought-patterns) are coming up fast. He knows he's out of date, and that our Wave of Change is going to drown out his old-timey BS.

You see, there are two primary artistic media that are about to render all others irrelevant: monologues and YouTube. If I'd been able to, I never would have published my monologues, or even performed them at open mikes, or on street corners; I simply would have filmed (or, really, "videoed") them and put them right on YouTube. Unfortunately, I don't have a video camera. There are many reasons for this, but one of them is because, Mr. Updike, they cost a hell of a lot more than $14!

I won't lie to you: when I read his review, I was furious. I don't mind admitting this, because I am human, and I embrace my humanity. I also acted on this anger, a fact which also fails to shame me, by sending Updike an e-mail. The e-mail consisted of simply this:

I love emoticons, because they really represent, and speak to, the full range of human emotion. They certainly do a better job of it than Updike's dried-up old books. And the proof that my e-mail struck a nerve is that not only didn't he respond, he also changed his e-mail address. Game, set, match. Also, check-mate.

So, there you go. Updike's review was like a fly on the dinner table: mildly annoying until you smash it with a magazine. After that, it's on with your life. In short, I've moved on.
Posted by bill r. at 7:49 PM

This is how Updike feels right now

Yes, you have done this to him

And he has been reduced to this

Sticking his tongue out at me is just childish, though.

I don't think I've seen him cry that much since he found out that Michael Bay let the option run out on Rodent, I mean, Rabbit Redux for the First Time.

Judging by the last Updike novelI read ("Terrorist") the man is so far up his own ass that he doesn't have a clue how people think or speak. The dialogue he wrote for his African-American characters, in particular, was just embarassing. If Updike doesn't appreciate it, then I know your stuff is good!

I know you've moved on, but I'm outraged on your behalf.

Thank you, Pat. It is my hope that people like yourself (and, of course, me) can build a wall of outrage and hope over which the likes of John Updike cannot climb!

Bill, I feel your pain. Now that dog turd that Roth pushed through my letterbox doesn't seem such a big deal.

Roth has never pushed the turd of any animal through my door -- dog, chicken, monkey, you name it, Roth has not soiled my home with one of its turds. Which makes me feel a bit slighted, because at least with you, the insult was personal, and took real effort. All Updike did was "write" a "review", probably while sitting on a giant throne made of golden pieces of diamonds. What a snobby bastard he is.

Shortly after earning her bachelor’s in business administration Eve Patricia accepted the offer of an interview for an entry level job with a negotiations firm. As part of the process she was asked to take a test in which she was presented with twenty fictitious negotiating scenarios – some involved business deals, some concerned international geopolitical crises, some focused on family tensions and personal relationships.