The Kind of Face You Slash - Day 12: Jungles of the Upper Air 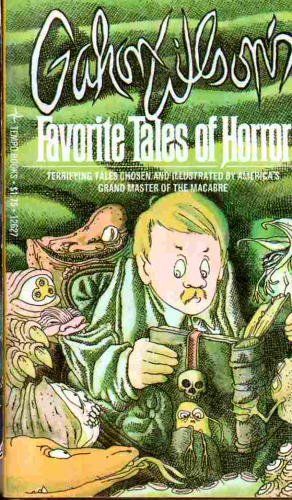 Speaking of Gahan Wilson, as I was just yesterday, along with being an artist and a writer, he also edits horror anthologies. Well, two anthologies. The last one came out over forty years ago. But still! Horror anthologies! I have here before me the more personal, to Wilson, of the two, Gahan Wilson's Favorite Tales of Horror. It's not an especially long volume, and Wilson only offers a few paragraphs of introduction and a few lines before each story to explain his thinking behind, say, including among the eleven stories a chapter from the memoirs of Sir Frederick Treves. Considering that Treves is famous for being Joseph Merrick, aka The Elephant Man's doctor, Wilson's thinking here can probably be deduced.

Anyway, not a lot of extra bits here, is what I'm saying. As far as the roster of authors Wilson has gathered together, apart from Treves we have a reasonably popular lineup, one that includes Charles Birkin, Clark Ashton Smith, M. R. James, and Robert W. Chambers. The Chambers story is called "The Harbor-Master" and I'll tell you, I wanted to read that one for today -- of it, Wilson says "The evocation of the sheer physical presence of a monster has never, I think, been better done..." -- and my rules for this project being less strict than they once were I very well could have, but the pull to write about another guy was too strong. 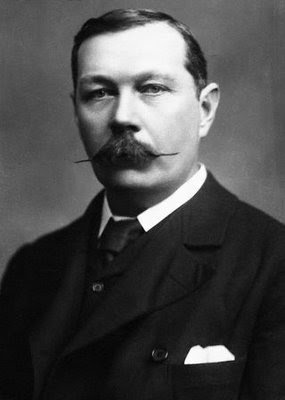 But of course, what am I going to say about Arthur Conan Doyle? Are you guys really itching to know that I think Sherlock Holmes is a great character and I sure do like those stories? I can't say this for sure, but I think "The Horror of the Heights," the Doyle story Wilson included in this anthology, is the first Doyle story I've read that was not about Sherlock Holmes, a fact that, were he around today, would have exasperated Doyle. The man has a rather massive body of work outside of Holmes, and the fate of that work seems to be to enjoy occasional reprints because Doyle's name is on the cover, and then never read by anybody. I myself recently picked up a volume of Doyle stories published by NYRB called Exploits and Adventures of Brigadier Gerard but haven't cracked it, but I'm excited to. There's a whole, complete writing career behind Doyle that has nothing whatsoever to do with the stories I love. How is that not a great thing? And yes, I love Holmes, and Doyle hated him, but that's okay. The man's entitled to his ridiculous opinion.

When I was younger, I assumed that the Holmes stories were really the only genre fiction Doyle wrote. Eventually I learned otherwise, and I picked up from somewhere that his novel about the Hundred Year's War The White Company was one of his own favorites, and so I just naturally assumed that historical fiction was his passion, genre fiction was how he made money, and he hated it. Of course the truth is nowhere near that simple, not least because whatever his final opinion, Doyle didn't create Holmes with a sneer on his face. Plus there's the Professor Challenger books, and, of course, his horror fiction. After reading "The Horror of the Heights" I'd very much like to read more of it. In his introduction to the story, Gahan Wilson writes:

This is a grand demonstration that if you do this kind of story well, it has fantastic survivability. The question here asked has long been answered, the dreadful thesis advanced is hopelessly outdated, and yet I'll bet you think of it at some point during your next supersonic flight and look up.

I wonder if "thesis" is the correct word here, even though Doyle would come to believe a lot of goofy stuff in the course of his life, but otherwise Wilson is right. The story imagines what horrors could exist 30,000 and 40,000 and more feet into the air, as airplane and flight technology, at the time of the story's publication, made such heights ever more reachable, and us geniuses in 2012 know there aren't any monsters up there at all, but in terms of the effectiveness of Doyle's story this doesn't matter one ounce. It's a wonderfully strange and chilling story anyway, plus Doyle's protagonist, a pilot, inventor, and adventurer named Joyce-Armstrong (the story is made up mostly of a portion of a journal the man kept, the man himself now missing, that has been given the delightfully ominous and official-sounding "The Joyce-Armstrong Fragment"), who himself actually offers a slight rebuttal to Wilson's point about the story having been disproved, a rebuttal that no longer works, but that nevertheless might have an interesting effect on your imagination:

A visitor might descend upon this planet a thousand times and never see a tiger. Yet tigers exist, and if he chanced down into a jungle he might be devoured. There are jungles of the upper air, and there are worse things than tigers which inhabit them.

"The Horror of the Heights" spends most of its pages chronicling Joyce-Armstrong's journey into the sky, most of the trip passing by without being encroached upon by otherworldly beings. It felt very slightly like something by Antoine de Saint-Exupéry, eventually mixed with what I imagine Doyle's own Professor Challenger stories are like (a really weak-ass comparison, I understand that). When the horror comes, the tiger/jungle comparison actually doesn't seem especially accurate. What Doyle's version of the "upper air" feels like to me is another ocean, and the creatures Doyle describes, with their floating, billowing, strange and beaked nature, sound more like the mad, alien things that live on or near the ocean floor. I'd be terrified to be surrounded by a school of those things, too. The story ends in much the way you'd expect, based on Doyle's own build-up, and I'm wondering if Doyle might not have wanted to do more with this idea. Not necessarily in this story, but to expand on it in other works. Maybe it's best that he never did -- I'm a big proponent of letting strangeness be -- but I am curious to know Doyle's own take on this. 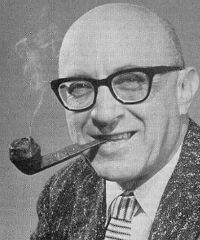 I did read one other story, a very short one called "The Clock" by William Fryer Harvey. Also known as W. F. Harvey, he wrote "The Beast With Five Fingers," which became the famous film starring Peter Lorre, and published a total of only three story collections in his lifetime, plus one posthumously. And "The Clock" is good, very much my speed, but I have one small problem with it. What it's about is, a woman, our narrator, agrees to do a favor for another woman, Mrs. Caleb, and go to Mrs. Caleb's home, which has been locked up for almost two weeks while she's on vacation, and retrieve a particular clock. There are connective details to all this that fill all this out, but anyway, so our narrator agrees, and her experience inside the house is very strange and frightening. I like much of this a lot, precisely for the reasons highlighted in Wilson's description of it:

He's right, and that's great, and I'll leave it to you to enjoy this, as I say, very short story on your own. But my problem -- and I'm not convinced this is me doing anything more than picking nits -- is that the narrator's fear, once inside the house, begins because the clock she's been asked to retrieve is still ticking. It's been twelve days, so a wind-up clock in those days (the story was published in 1928) should have long since winded down. Okay, but this causes the woman to be frightened, even before the frightening stuff happens. Had I been in her shoes, if I even thought about the fact that the clock was still ticking (without question, the strangeness of this would have never occurred to me), my reaction to it would have been something along the lines of "Huh." Then I would have left.

But it's a good story, and I plan on reading more of Harvey's stuff (there's a good, affordable omnibus volume out there of his work that I plan on picking up). It's just that we all get hung up on something from time to time, and clocks ticking beyond the point they reasonably should do not chill my blood.
Posted by bill r. at 10:10 AM

The story ends in much the way you'd expect, based on Doyle's own build-up, and I'm wondering if Doyle might not have wanted to do more with this idea. Not necessarily in this story, but to expand on it in other works. Maybe it's best that he never did -- I'm a big proponent of letting strangeness be -- but I am curious to know Doyle's own take on this.

I didn't get that impression, that Doyle had any intention of expanding on this story in future work, and that must have added to its power. If there's anything decades of sequels and rehashes and cash-in franchises has shown us, it's that in terms of horror stories, it's that not only is less generally more, but more almost always ends up being less.

It's been twelve days, so a wind-up clock in those days (the story was published in 1928) should have long since winded down. Okay, but this causes the woman to be frightened, even before the frightening stuff happens.

Maybe not too unreasonable for the character, being alone in a big strange house in the countryside and maybe given to the sort of odd notions a situation like that can inspire. Maybe it's more a sense of foreboding than outright fear Harvey was going for here. I don't remember the details too well, but I remember liking it. The way it builds a powerful inexplicable dread in a seemingly benign (at first, anyway) environment, with that little clock ticking away at the center, maybe not so innocent as it seems.

Does Wilson say more about it in his introduction? I seem to recall him saying something like "You could end up wishing you hadn't found out..."

Re: Doyle - Ah, I was just speculating, based on nothing much. I obviously agree with you about franchises and whatnot, but of course not everyone agrees, and Doyle had more than one on-going series.

Re: Harvey - He actually says she was frightened. It was pushing the situation just a touch too far in the early stages. It's a minor complaint. I liked the story. As for what Wilson said, I'd have to check the book when I get home.