The Kind of Face You Slash - Day 17: The Turkey Buzzards Perched

This is going to be a short one today. I'll explain why in a minute, but that wasn't my intention. My intention for today was to write a post not significantly different from most of the others I've written so far this month, with the potential there for something maybe a bit more interesting. This potential was there, I thought, because the source of today's stories was something I wasn't used to, specifically Granta, a UK-based literary magazine that subtitles itself "The Magazine of New Writing." It's a quarterly publication, roughly, and each issue had the length, physical dimensions, and heft of a trade paperback book. Each issue also has a central theme, and their Autumn 2011 issue was their horror issue. Observe: 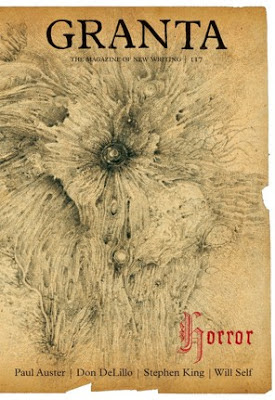 You can see from that partial list of authors at the bottom there that a pretty diverse group of contributors has been represented. Given the fact that, as they say these days, I am "all about this, guys," I was cautiously excited about what Granta considered horror, the caution stemming from my uncertainty about what Granta considered horror. I chose to have it both ways by going the safe route with the Stephen King story, as well as the more unsure one with the Don DeLillo story. My instincts were dead on the money, as it turns out -- rather too on the money, because the King story is way too safe,and the DeLillo is so unsure, as a horror story anyway, that...well, it's not a horror story. It's dark, but so is Ragtime. Doesn't make it horror.

So that's why today's post is going to be short. I have almost nothing to say about either one, and am currently suffering from a mild bout of discouragement. Only in relation to this particular post and these particular stories (plus I'm having frustrating computer issues, but never mind), but it's enough to make me just shrug like a son of a bitch.

But anyway. The King story is called "The Dune." It's the second new King short story I've read in the past year and a half or so (and I expect a new fiction collection to be published just about any day now). The first one was "Herman Wouk is Still Alive," a non-horror story that was published in The Atlantic in May 2011. It's a great story, flawed, but fascinating, and finally in the last page, particularly the last couple of sentences, it becomes about as devestating and as angry as anything King has ever written. By contrast, "The Dune" reads like something he scribbled out over his morning cereal, in lieu of the daily crossword. It's about a 90-year-old conservative Southern ex-judge (his conservatism actually has no bearing on the story, it doesn't signal the man's villainy, which, given King's generally frothing political bullshit over the last few years, I was delighted by) who, as the story opens, we learn is addicted -- his words -- to rowing from his massive home across a short section of lake to a tiny island consisting almsot entirely of a single dune. There's a lot of stuff here about old age and mortality, common themes for King lately, though what the dune is, and why the judge is drawn to it, is saved for a scene that takes up the rest of the story, a long conversation between the judge and Wayland, his attorney. The purpose of the meeting is to finalize the judge's will, and along the way the judge decides, what the shit, I'll tell him about the dune. The dune, when you go there, you see a name written in the sand. Shortly afterwards, that person dies. You may know the person, you may not. But that's what happens. And then the story ends on a twist, the only twist a story like this could reasonably have, and King ends it with a EC Comics sting of italics. Okay, fine. Is this the best King had to offer Granta, or did he not care because he knew they'd publish whatever he gave them, or did Granta not care because they don't realize that King is capable of much better? I don't know, but it feels to me that King had an opportunity to restore some dignity to the genre and he muffed it. Maybe he thought talking about old age a lot would take care of that by itself.

Then we have DeLillo's story, "The Starveling," which can also be found in his recent story collection The Angel Esmerelda. For the record, I've read three DeLillo novels: Libra, which, despite my virulent hatred of conspiracy theories and theorists, I thought was actually kind of magnificent; Underworld, his 800-page monster, about which I don't remember a great deal, other than that, like pretty much everyone else who read it, I thought the sections that took place in the 1950s were so much better than everything else that it wasn't even a contest; and White Noise, the book that, if you've read one DeLillo novel, well, it's this one. And while that one got under my skin in certain personal ways, I largely did not care for. Smug and unfunny, even though it was supposed to be funny, mostly. So I'm undecided on the guy. Oh, plus, I read half of Mao II. My opinion of that oneis that I chose to only read half of it. "The Starveling," I must say, reminded me of Mao II more than anything else.

I don't know what to say about it, to be honest. It seems to have been inspired by this documentary I saw once about a particular kind of film fanatic, mostly New Yorkers apparently, who plan their entire lives around seeing several films a day, scheduling each day in a notebook and plotting the subway and bus routes to get from one screening to another, planning things out to the minute (I searched my Netflix rental history to find the title of this thing, and I can't -- strange). A strange and sad bunch, and the main character of "The Starveling," Leo Zhelezniak, is one of them. Leo lives with his ex-wife and the two barely get by, but still Leo chooses to spend most of his time this way. Nothing else matters, and his brain is so given over to it that he can't remember the haircut he got three days ago. One day, his schedule is disrupted when he sees a woman leaving the same screening as him, and he begins to follow her. He recognizes her as the same kind of film junkie as him, and knows that her next destination will be another movie theater. Turns out he's right, but along the way there's lots of this:

Always the sense of anticipation. To look forward to, invariably, whatever the title, the story, the director, and to be able to elude the specter of disappointment. There were no disappointments, ever, not for him, not for her. They were here to be enveloped, to be transcended. Something would fly past them, reaching back to take them with it.

That was the innocent surface, on loan from childhood. There was more but what was it? It was something he'd never tried to penetrate until now, the crux of being who he was and understanding why he needed this. He sensed it in her, knew it was there, the same half life. They had no other self. They had no fake self, no veneer. They could only be the one embedded thing they were, stripped of the faces that come naturally to others. They were bare-faced, bare souled, and maybe this is why they were here, to be safe.

Maybe this all means something to you, I don't know, but it reads like grasping phony garbage to me. Movies, as movies, mean nothing in this story -- only two, Apocalypse Now and The Passenger are mentioned by name -- and DeLillo's attempts to understand this very specific, outsider kind of filmgoer doesn't communicate to me any actual curiosity, and certainly no insight. That kind of filmgoer, if nothing else, absolutely knows their shit when it comes to the artform they obsess over. "Their shit" might be pedantic minutiae, but they know it, and it obsesses them. DeLillo can't really be bothered to even mimic that obsession, because, I suspect, he's not genuinely interested. He thinks it's odd, but every attempt to see through their eyes or think with their minds results in vague, "Movies take place in the dark, what about that, that do anything for you?"-style inanities.

As for horror...this isn't a horror story. That's not DeLillo's fault, I have little doubt that this was never his intention. I guess I blame Granta, but whatever. I don't care. Pffft.
Posted by bill r. at 10:07 AM

So enjoying this series, thank you.

And the film you're trying to remember was called, I believe, "Cinemania" -- mostly because "Indiscriminate Movie Watchers with OCD and Bad Hygiene" wouldn't fit on a marquee.

That's it! Thank you. I remember the most together guy in that movie believed that Walt Disney had frozen his head.

They could only be the one embedded thing they were, stripped of the faces that come naturally to others.

And thanks from me too. This is all, as ever, good stuff.