The Kind of Face You Slash - Day 20: Titan Qom-maq is Your Ever King!

In the afterword to his story "The Million-Shadowed One" from his collection Sesqua Valley & Other Haunts, W. H. Pugmire writes:

As a child I was such a freak that I never felt love from family or society. I was always being critiqued and made fun of for being so stupid, lame and weird. Perhaps part of the reason I created Sesqua Valley was so that I could have a place where all the weirdness that is within could find a home of acceptance and love. I often visit Sesqua Valley in my dreams, and I am always accepted absolutely for who I am.

I'll be honest with you, that gives me some pause. Like maybe I should just stop here and say "This isn't for me, but maybe YOU guys would like it!" I suspect that would not be sufficient, but it gives me no pleasure to tear down the work of a writer for whom it is so self-evidently personal, and who, anyway, isn't exactly skyrocketing to fame and riches. But the Pugmire fiction I've now read inspires in me wild fits of furious dismissal. 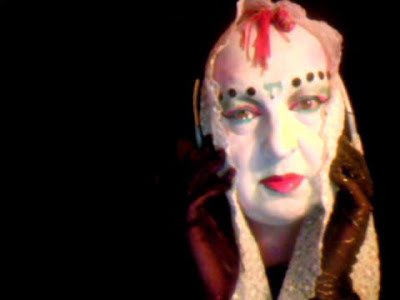 W. H. Pugmire's full name is Wilum Hopfrog Pugmire. At least "Hopfrog" was adopted by him once he was of legal age to do so. Among his stated influences are Edgar Allan Poe, of course, William Shakespeare, Oscar Wilde, and H. P. Lovecraft. But perhaps let us dispense with the first three, middle name be damned. Pugmire is a Lovecraftian. He is only a Lovecraftian. Even his interest in poetry, and Pugmire is a poet as much as he's a writer of prose fiction, seems rooted more in Lovecraft than anything else. And I'll say upfront that I see no other way to look at his work, some of which, obviously, I read today, than as fan fiction. At least what I read in Sesqua Valley & Other Haunts. I'm not even sure Pugmire would disagree with me. In another story afterword -- to a story I didn't read -- he says:

It's a game played by those of us who are deluded into thinking that we pen Lovecraftian prose, to take a plot or aspect of plot from Lovecraft and rework it into a story of our own.

And it read like fan fiction. Somewhat better fan fiction than I imagine is the norm -- I confess to not having really read any before, a giant blind spot, I'll grant you -- but that doesn't mean that reading it didn't grind me down something awful. I read three stories, "The Million-Shadowed One", "The Child of Dark Mania", and "The Hands That Reek and Smoke," as well as a handful of poems. None of these are long, the stories about eight pages each on average, the poems are all sonnets of fourteen lines, and after a while I just couldn't hack it. Here's a sample of Pugmire's way with dialogue from the beginning of "The Hands That Reek and Smoke":

"You must see Nyarlathotep," she panted, refusing the chair that I had offered her, preferring to frantically pace the wooden floor. One hand clutched a large canvas that was covered with a thin sheet of cloth.

"It amazes me," I said, smiling patiently, "that hair as short as yours can look so disarrayed."

"Screw the hair," she shot back, at the same time running a gloved hand through the thick unruly mess. "You've been moaning for over a year about your inability to write, to dream fresh vision. I tell you, go see Nyarlathotep, and he will drench your brain with phantasm."

My issue isn't "But nobody talks like that!" but rather that immediately in this story -- this passage is right at the beginning -- Pugmire's style reveals itself as an adolescent's idea of grandiosity. When I think of a modern Goth, you know, person, I imagine a very serious, very immature, very self-regarding as well as self-loathing, person who has a small nest of interests about which they don't really know that much, but more importantly whose idea of creativity is to simply try to recreate to the letter that which they admire. Which of course can describe a whole swathe of personality types; it's just that Goths are the ones who would write "he will drench your brain in phantasm."

Here's a sampling of lines from Pugmire's poems:

In dreams you sense the passion of the daemon
That lures you from the slumber of the sane.

In shadow'd realm of candlelight I borrow
A semblance of your cunning wolfish ray.

That self-substantial fire, twice more cold
Than those refracted rays of lunar stream. 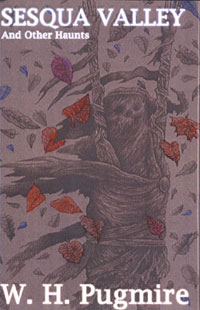 So they're all the same, basically. That's what I get from it, anyway. Rarely have my eyes so glazed over while reading horror fiction for this project, and I've read stuff I would rate as much, much worse. Certainly much less personal. Pugmire writes Lovecraftian stories and poems, with a stylistic eye very explicitly towards mimicking his hero, because that is precisely what he wants to write. It is precisely what he's driven to write. The stories I read aren't exactly interchangeable -- "The Hands That Reek and Smoke" and "The Child of Dark Mania" are horror stories, while "The Million-Shadowed One" somewhat intriguingly uses Lovecraftian ideas (or just plain Lovecraft, since it's written as almost a sequel, blatantly so, to Lovecraft's "The Dunwich Horror") to actually be kind of sweet, or anyway that's the goal -- they all sound and feel like they might as well be. How many times do I have to read about visions of ruins in the far future with, like, things and shit dancing around them? How many times do I have to read about something or someone howling, or braying? He spells "ancient" as "antient." He sometimes uses "mine" instead of "my." Characters ask:

"This is most peculiar, Geoffrey. Do you say you actually touched a cosmic otherwhere?

And I'm expected to somehow not stop reading right there. He uses "outrè" a lot.

Pugmire has achieved some level of success with his writing. Discerning horror critic ("somewhat discerning" I'd say, but whatever) S. T. Joshi is a huge champion of Pugmire, and Centipede Press has given his work this kind of treatment. Laird Barron's got his back. Other critics have seen much more of Wilde, and even Henry James, in the stories than my own unquestionably meager experience came at all close to revealing. But this stuff, today, these stories and poems, whipped my ass. I wanted nothing more to do with them after I was halfway through the third sonnet. I couldn't take it. All moons and strange music from unknowable instruments and paintings that drive you insane and ruins and the moon again and something in there about water probably...this shit broke me a little bit. There, I said it. Maybe I hate horror now. Maybe tomorrow I'll write about P. G. Wodehouse. Fuck it.
Posted by bill r. at 11:35 AM

Labels: The Kind of Face You Slash, W. H. Pugmire

Is the pasty face that of Pugmire himself, or a present day Boy George?

No, that's Hopfrog, all right.

But this was good though! You should ball up and be less self-depreciating. ;)

Every now and then I treat myself by splurging on volume from Centipede or a similar publisher. So glad I dodged the bullet on that one. Those excerpts really seem dire. I'm surprised to find that Barron would come out for this stuff as it seems to me that he gets the key to writing Lovecraftian work if you're not HP: keep the vibe, drop the style. Or at least the worst aspects of the style. I think too many acolytes of Providence's favorite son don't want to accept that he's really sui generis. His stuff has all sorts of problems on a very bedrock level but he pulls you over all of it with his concepts and his total conviction. That's difficult/impossible to replicate.
If you're gonna do Wodehouse, I suggest "The Doom That Came to Blandings"- the Empress contracts a rare strain of swine flu and eats Lord Emsworth on the front steps. It's up to Uncle Galahad to grab the family rifle from the Boer War and track her into the ruins beyond the hills. Bit of an outlier in PG's ouvre, really.

I couldn't disagree with you more and i think your critique was rather ham-fisted and without merit.

So, in other words, go fuck yourself, hack.

I agree with everything you express.

My newest books may be found on Amazon at great prices. THE STRANGE DARK ONE--TAKES OF NYARLATHOTEP, is a collection of all of my better tales concerning ye Crawling Chaos. UNCOMMON PLACES, publish'd by Hippocampus Press, is beautifully illustrated by Swiss artist, Gwabryel, and is a collection of up-ye-arse arty prose-poems and such. ENCOUNTERS WITH ENOCH COFFIN is a brilliant collection that I co-wrote with Jeffrey Thomas, concerning a sinister New England artist and his Lovecraftian encounters. BOHEMIANS OF SESQUA VALLEY investigates my haunted set-place with new novelettes of intense Lovecraftian horror.

If you care to see my slashable face in motion, I have a YouTube channel. Go to ouTube and search "Wilum Pugmire." A recent video is an interview with S. T. Joshi, the world's leading H. P. Lovecraft scholar, who is working on a new four-volume VARIORUM edition of Lovecraft's tales.

Pugmires prose reads like his pant size. Blubbery, bloated and full of shit.

My pant size??? My dear, as a devout transvestite, I try never to don trousers.