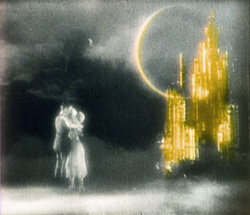 Lonesome, Paul Fejo's near-silent masterpiece from 1928, is being released today by Criterion, and reading through some of the essays and excerpts included in the Criterion booklet has been sort of depressing. Not because of what became of Fejo, who seems to have lived a pretty fulfilling life, both in and out of film (in one of the essays included, Phillip Lopate notes that Fejos's name is probably more recognizable now in anthropolgy circles, due to his career in that field, than among cinephiles), but because of what's been lost over time of his movie work. So it's depressing for me, is what I'm saying.

An excerpt from an interview with Fejos for Columbia University's Oral History Research Program and included in the Criterion booklet, about how Fejos, a Hungarian immigrant, got the gig to direct Lonesome is both fascinating and kind of hilarious. Fejos had made a film called The Last Moment that impressed Hollywood pretty thoroughly, so that everyone wanted to work with him. But Fejos didn't want to work with just anybody -- they had to bow to his terms that he be allowed to make whatever film he wanted, in the way he wanted to make it. As a result, he walked out on one studio meeting after another. The story reminded me of the Twilight Zone episode "The Sixteen Millimeter Shrine" which starred Ida Lupino as a fading, aging, delusional former star who wouldn't listen to any studio talk of giving her roles that maybe suited her age rather than the young romantic ingenue, the difference being that Fejos was young and vibrant and maybe a bit too cocky, but it eventually paid off for him (as it sort of did for Lupino in the episode, but only in a manner of speaking). Anyhow, after his final meeting with Universal, and with Carl Laemmle, Jr. intervening on his behalf, Fejos was finally given what he wanted, and from that we got Lonesome.

And it's a pretty stunning film. It's a simple story, whose theme is announced right in the title, about two New Yorkers, Jim (Glenn Tryon) and Mary (Barbara Kent) who day in and day out are put through the grinder of the metropolis, squeezed in by buildings and trains and other people they don't know, only to end up back in their shabby apartments alone at night. We see both of them turning down offers to accompany friendly couples as the third or fifth wheel on some kind of gleeful outing or another, which leads both of them to Coney Island, where they meet, and are separated, and meet again.

In the interview, Fejos calls the story "high corn," and he appropriately means this as a compliment. It is corny, but in the most emotionally sweeping way. Tryon and Kent are wonderful -- less so, maybe, in the few "talkie" scenes that Fejos includes -- and it's very easy to find a rooting interest for these two crazy kids to get together (Barbara Kent being unbearably adorable don't hurt, I'll admit). I found Tryon to be particularly interesting, as a "type" anyway, because in his first scene he's called on to do some frantic, silent-era physical comedy, which he pulls off just fine, but it's interesting that Tryon did not remotely look the part of a comedian, silent-era or not. Though maybe not quite so worn down by the world around him, he had a little bit of John Garfield in his face, so that his antics feel not quite as much like a lark as they might otherwise.

The pull of Lonesome comes not only in the emotion of the story, but in Fejos's groundbreaking, almost manic and frequently fantastical visuals. I mentioned before that a few scenes incorporate sound (and it's interesting that the image in these scenes is immediately much crisper than the rest of the film), but that's just part of it. That image at the top of this post -- that's Tyron and Kent dancing, roughly at the moment they realize they're in love -- is a good example of the almost ethereal nature of the color effects Fejos employs. Coney Island may be a madhouse, but it is, at least under these circumstances, a glorious one. One of the sound sequences features Tyron and Kent sitting together on a bench, sad at the thought that their evening could be ending, and as Fejos designs it, the world sheds all its dead weight so that it can be narrowed down to the two of them. It's very theatrical, almost literally -- they appear to be on stage, characters in a play rather than a film. Later, the inevitable crisis occurs, in the form of a near-accident on a roller coaster. There are two tracks, with Jim in a car on one track, and Mary across from him on another track. A wheel on Mary's car catches fire, and Fejos uses sharp wooshes of red to signify flames, and I'll be damned if it doesn't work -- that thing looks hot, even if it doesn't actually look a bit like fire.

Anyway, this being "high corn," things...well, you can watch it, and should watch it. Fejos ends on a shot that struck me as just about perfect, and peculiarly modern in a way I can't quite put my finger on. But I'm still depressed. As I said earlier, Fejos got the job to direct Lonesome through a low-budget effort called The Last Moment, which was about the final, life-passing-before-your-eyes thoughts of a drowning man. Supposedly, it was an amazing piece of work. Sadly, it's lost. For good, I guess. Goddamnit, I want to see that movie.
Posted by bill r. at 12:49 PM

Very nice, thanks for sharing.

I've been waiting sooo long for this! A saw the movie once (tough I don't remember any color or sound parts in the version i saw) and it's so beautiful I had to cry at the end. If you like MENSCHEN AM SONNTAG, you will love LONESOME!