The Diabolical, the Fantastic, and the Marvelous 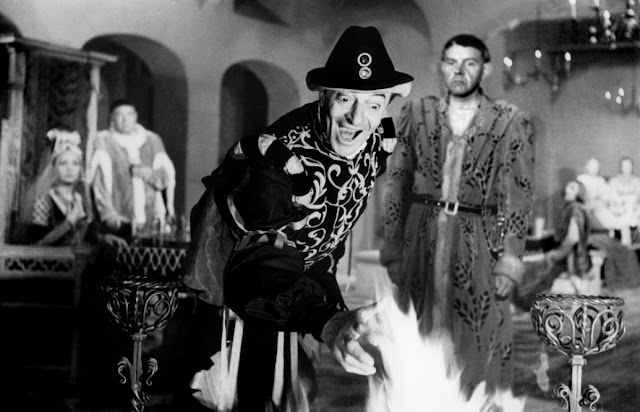 That guy, right up there, is the devil. As played by Jules Berry in Marcel Carne's Les Visiteurs du Soir, which is being released by Criterion tomorrow, the devil is impish, as that still implies, but also quite unambiguously evil. He's a jolly sort, and he likes games, unfair games, and unfair contracts, but that version of the devil isn't always paired off with genuine evil as this one. At one point, he's gloating to Anne (Marie Dea), one of the several star-crossed lovers in the film that the devil is manipulating towards catastrophe, and he ends his litany of horrifying successes (which, when taken together, is basically the whole of human suffering) by saying "Death? That's me, too!" And he's delighted.

His plot this time around is very small in scale, and that's the fascination. This fairy tale set in a French castle finds Anne, the daughter of Baron Hugues (Fernand Ledoux), set to be married to Renaud (Marcel Herrand), a not particularly winning fellow who Anne describes as approaching everything in his life with the same level of tight-lipped seriousness -- "I'm going hunting" and "I love you, Anne" exit his mouth with the same clipped tone. But she's prepared to go through with it until, one day, two performers, Dominique (Arletty) and Gilles (Alain Cuny) arrive at the castle, ostensibly to take part in a pre-wedding celebration. The are in reality, however, on a mission from Satan (Les Visiteurs du Soir translates roughly to The Devil's Envoy) to cause unrest and unhappiness and possibly even death, should they be able to swing that, in a situation where everything's already on the brink of unhappiness already. To achieve their ends, they stop time, and Gilles whisks away Anne, and Dominique (a woman pretending to be a man, until she confesses the truth under whatever circumstances will best suit her needs) seduces Renaud. And then later Baron Hugues, a somber widower, as well.

The glitch is that -- and this is the devil's key mistake, as it so often is -- though they've signed themselves over to the devil, Dominique, and especially Gilles, are still human beings. When we first meet the pair, a man is fleeing the castle in despair after soldiers have cruelly and needlessly killed his pet bear. Gilles restores the bear, and Dominique asks why he bothered. He replies that sometimes he still likes to do good deeds. And so whatever his initial motives, his love for Anne becomes genuine. 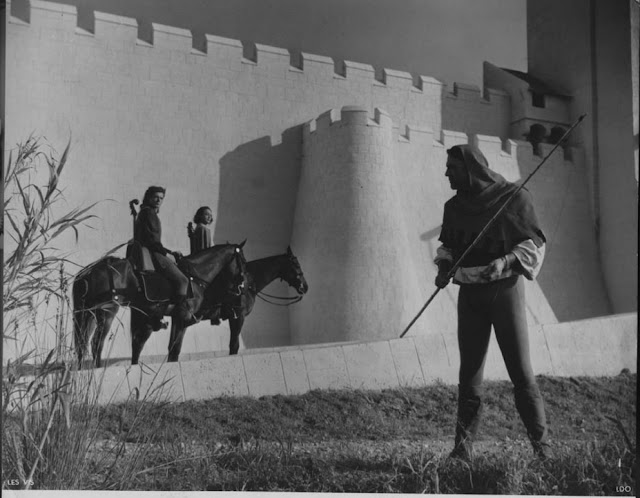 Les Visiteurs du Soir is a fascinating film for a number of reasons, not least of them being that Carne made it in 1942, under the watchful eyes of his country's Nazi occupiers. It's very easy, knowing that, to read the film as a simple allegory of evil, and good in the face of evil, and the triumph of spirit under the worst conditions. However, in his essay "Love in the Ruins" included in the Criterion booklet, Michael Atkinson writes:

One doesn't quite need to label it allegory; it would be difficult to come up with any dramatically structured film that, had it been made under Nazi noses, could not be somehow construed as a protest or expression of resolve. Does that make any perceived subtext meaningless or, in this historical context, all the more poignant? According to a twenty-five-year-old [Andre] Bazin, writing in Revue jeux et poesie in 1943...it became the film du jour, the manifestation of the national spirit, and "the diabolical, the fantastic, and the marvelous soon became the conventions of our present production."

This is why Les Visiteurs du Soir is such a rarity, and the kind of thing people are talking about when they refer to "timelessness" in art. Most art that wishes to address some current, specific social issue simply does so bluntly, but other works, such as this and Arthur Miller's The Crucible, are able to be about the thing we're all proud to have noticed they're about, as well as about what they seem to be about, and the difference in importance between the two is negligible. When Nicholas Hytner was adapting The Crucible into his highly underrated 1996 film, Miller's big concern was that Hytner not mess with his version of 17th century American/Puritan speech, which you'd think would hardly bother him if the main point of it all was that no one ever forget about Joseph McCarthy. 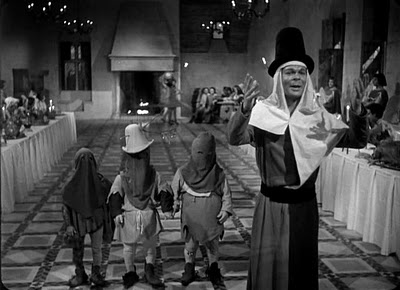 Les Visiteurs du Soir functions quite effortlessly in the same way. It's not hard to see the influence of Nazi occupation on Carne throughout the film, especially in its sad/hopeful ending, but you'd neither have to cut anything from nor add anything to the film to make it stand alone as a melancholy, eerie, inspiring fairy tale. This being a story about the devil, I was obviously keen to note what, if any, horror elements Carne brought to the table, and apart from the aforementioned gleefully diabolical performance by Jules Berry, you also have three dwarves also introduced as entertainment during the film's opening party, the enternmaint deriving from the fact that not only are they dwarves, but their faces are horribly deformed -- this fact is intended, by the man who proudly presents them to the baron, to elicit laughter, and this it does. Disturbing enough, but then it turns out that these dwarves have some affinity for, or connection to, or secret knowledge of Dominique and Gilles' demonic plans, and we seem them cavorting and chanting nightmarishly as the rest of the castle sleeps. Later, there is a duel where one character is left dead, and we witness all of this, as do Gilles and Anne, through a magical pool of water provided by the devil. Carne's use of the blood of the dead man to cloud the water through which we've just witnessed his death is a brilliant piece of fantasy/horror imagery, nearly on par with the work of Carne's rough contemporary and one of the most inventive genuises to ever toil in this field, Jean Cocteau.

Les Visiteurs du Soir is wonderful, in short, a fantasy film unlike anything we have now, or are likely to ever have again.
Posted by bill r. at 1:02 PM