Here Comes a Chopper to Chop Off Your Head 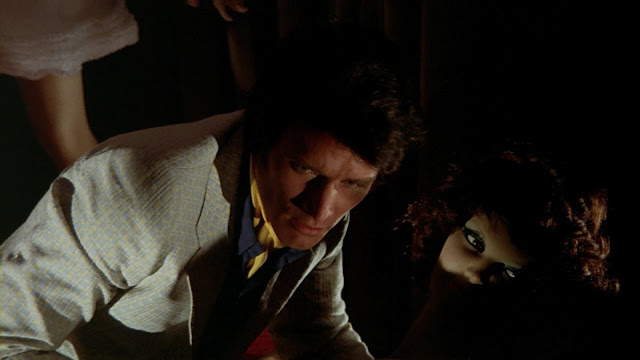 Today, Kino Lorber is releasing three Mario Bava films to Blu-ray, and while I could do no more than speculate about why these particular titles were chosen, it is interesting that they keep Bava within the horror genre – a genre he’s known for, but which he certainly didn’t work in exclusively – yet still provide a pretty nice sense of the man’s range. The films are the ultra-Gothic, and black & white, Black Sunday, the surrealist and sunny, until the sun goes down, Lisa and the Devil (paired here, as it often is, with the producer-mandated re-edit House of Exorcism), and the strange, subdued (in some ways) and very sly Hatchet for the Honeymoon. This last one became of particular interest to me as I watched it recently, it being the only one of the three I hadn’t seen before, but also because of its regular over-turning of genre conventions, whether the genre being overturned is an old classic, or one that Bava himself essentially invented just a few years previously.

I suppose I should say here, not that I can imagine it doing me any good, that Italian horror is something to which I seem to have a mild allergy. If it matters, I'm quite fond of Michele Soavi's Stagefright, while being thoroughly disdainful of Soavi's Cemetery Man. I like Fulci's Zombi or Zombi 2 or whatever well enough, and I remember that other Fulci movie where the chick vomits up all her intestines, but it is beyond me why Fulci should be taken seriously. The New York Ripper certainly is repulsive, though! I like Who Can Kill a Child? quite a bit, but that movie's Spanish, so why even bring it up? Meanwhile, Argento...you know, my Argento viewing has been so scattershot that I'm not sure it's really fair to mention him. I saw Suspiria when I was a kid and haven't gone back to it, I stopped watching the copy of Deep Red that I got from Netflix when the English dubbing dropped out and wasn't replaced with subtitles, which I've since gathered is for some reason just sort of what happens with that film on DVD, Opera pretty much just proved that I was right to be wary of this kind of thing, I liked Tenebrae...but my entry point to Argento, as an adult with a memory, was stuff like The Card Player and Do You Like Hitchcock? "Unfair!" most would cry. In any case, my issue with this stuff is that I'm rarely able to convince myself that the nonsensicality that is so often a feature of Italian horror is part of any kind of larger purpose, rather than a symptom of incompetence. Not that I'm saying Argento, for instance, is incompetent (well, he might be now), but rather that he's very good at the stuff he cares about, which leaves quite a lot of things that interest me in cinematic storytelling that he can't be bothered with. The set pieces can be wonderful, but everything else needs to just be gotten through.

Bava is different, though. I almost said "mostly different" but thinking about it, I could almost feel the first rock strike my temple. But basically I think I'm often finding more in Jean Rollin's films what I keep expecting to find an abundance of in Bava's. I've been slowly making my way through his work, and even if I'm not knocked over the head by, say, Lisa and the Devil, it's very clear to me that it's also not Opera, that there's an imagination, a full imagination, at work here, one that, as I've said, can encompass a lot. My two favorite Bava films so far are Bay of Blood, aka Twitch of the Death Nerve, and the crime film Rabid Dogs, and I've found very little about either of those to complai-genrn about, though the twisted joke of an ending to the former pretty handily obliterated from my memory any objections I may have had up to that point. And now I have Hatchet for the Honeymoon to consider, and while it may not reach the level of either of those films, or of Lisa and the Devil or Black Sunday, it does pretty handily trounce Blood and Black Lace, the Bava film from 1964 that is credited as being the first giallo, the subgenre of Italian horror/thrillers that I'm most resistant to, and the Bava film that Hatchet for the Honeymoon feels most closely connected to. 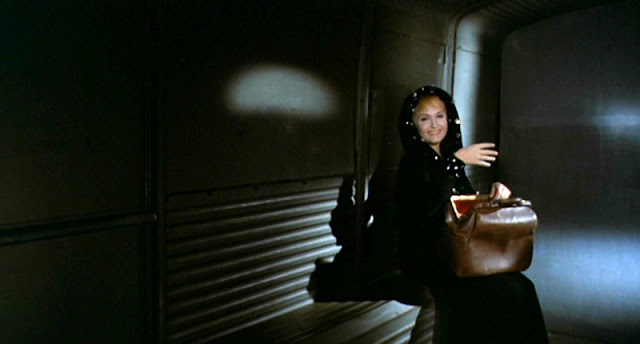 Made in 1970, Hatchet for the Honeymoon is about John Harrington (Stephen Forsyth), a hugely successful fashion designer who is also a serial killer, exclusively, it would seem, of women who are just about to get married. That's sort of your whole plot, which isn't too unusual for a giallo. What is unusual, at least in my limited experience, is that most gialli are, among other things, mysteries in the "whodunnit" mode -- someone is hacking up people, who is it? -- but you know from the beginning of Hatchet for the Honeymoon that Harrington is the killer. What you don't know, and what he doesn't know, is why he does it. But wait, why does he do it? He does it because he believes that with each bride-to-be he cuts down, a piece of the childhood psychological puzzle will be added to, and help clear up, the mystery of...why he kills young brides. Something happened in his childhood that caused him to become a murderer, and the only way to regain that memory is to murder. He murders to discover why he murders. The almost amazing part of all this is that by the end of the film, there's actually a logic to it all. The reveal, which I'm very tempted to give away because I honestly think it's so good and is part of what makes this film so interesting, is almost a punchline, but while Bava wasn't against the idea of occasionally playing his horror for laughs, I don't think that's what is going on here. Essentially, Harrington's murderous life and psychology is just a snake eating itself, which I suppose is giving away more than enough.

Along the way, Bava's able to get in a lot of other weirdness and more than a little craft. There's a terrific sequence, for instance, involving a murder that occurs in Harrington's home just before the police arrive (for various reasons, the police view Harrington as a person of interest), and with no time to cover anything up, Harrington is forced to leave the corpse on the landing of a stairway leading up from the foyer, where he and the police are eventually standing. Dripping blood and a dangling hand threaten at any second to give Harrington away, and the whole thing is just marvelously Hitchcockian, and put me in mind especially of the potato truck sequence from Frenzy -- not visually or anything, but the idea of feeling tense for the safety of an unrepentant murderer -- which is even more interesting when you consider that Hitchcock released his film two years after Hatchet for the Honeymoon came out. But since there's some very blatant Psycho stuff in this film, we'll call it a draw. Also interesting, and also not very giallo-like is the almost complete absence of graphic violence (or nudity!). Bava has never seemed to me to be the Italian horror filmmaker who was most interested in that kind of bloodshed, but he certainly had it in him. But not here, though, where you'd think he'd find plenty of space for it. No, instead he shows a woman struck down by the killer's hatchet by cutting, just as the blade is about to land, to a wild, red, still image of her face being split down the middle. It's very precisely timed and hugely effective. 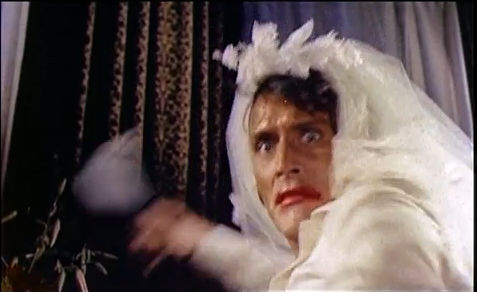 Plus, there's a ghost in this movie. To go too deeply here would get into more plot stuff than I'd like, or than you'd like, but suffice it to say, one of Harrington's victims comes back to haunt him. What's so weird about this is that while most filmmakers would try to make this a "is that really a ghost or is it in his guilt-ridden mind?" thing, Bava very explicitly removes that option by reversing the way these things are generally done: everyone can see the ghost but Harrington. But Harrington knows for a fact that the woman everyone is claiming to be having a conversation with, or whatever's going on, is dead as shit. I kept waiting for Bava to pull some typical giallo nonsense out of his ass to deal with this, but he never does. It's pretty great, even if it is entirely shithouse.
In some ways, Hatchet for the Honeymoon provided me with the same kind of negative reactions I often get from such films, including, I must admit, Blood and Black Lace. Dialogue's not a big deal in these movies, I guess, and while broad acting can be fine, can be great, broadness delivered with a blank face is something I've yet to warm to. Though Forsyth is good, as is Laura Betti as his wife -- she's at least not blank-faced. But this is one of the rare Italian horror films that makes me not care so much about the more typical filmgoing pleasures that I've become used to. It's offering up some very different things, and they turn out to be plenty.
Posted by bill r. at 6:15 PM

Hmmm, I beg to differ on your placing of Hatchet for a Honeymoon above the masterpiece that is Blood and Black Lace! While interesting for what it is,it pales in comparison to the frenzied killings and rainbow lit set pieces -including that great title sequence in BaBL. And it's all tied up so neatly at the end . I for one find it his most Bava-esque color film.