Making Good Use of Hatpins 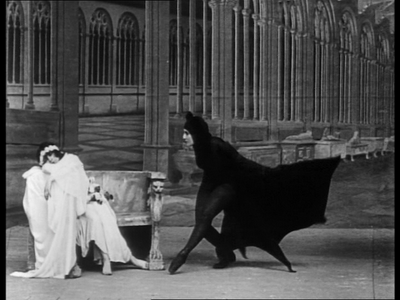 In the last year, I have watched more silent films than I had in the previous 35 years of my life combined. If your takeaway from this statement is that this hardly makes me an expert, that would be both fair and accurate. Nevertheless, I found it interesting while watching the just-released-today Kino Lorber Blu-ray of Louis Feuillade's 6 1/2 hour pulp crime serial Les Vampires that I had never before seen, or at any rate noticed, any silent film outside of this one use the change from blue tint, for a dark room, to black and white, for a well-lit room, when a character flips a lightswitch. Feuillade does it time and again in Les Vampires, and it's so simple, and so obvious, and so primitively effective in its altering of the scene's perspective that I had to wonder if this was everywhere in silent films and I just hadn't been paying attention. Les Vampires was made in 1915, after all -- pretty early days. Surely someone at least copied him? I'm honestly asking.

More significantly, I suppose, is that "1915" business. Basic math will reveal that this is nearly 100 years ago, and you'd be hard pressed to find a book that old in the kind of near-pristine condition of this Les Vampires release. "Near-pristine" is probably an exaggeration -- it's a very old movie, and looks it. But given the volatile nature of celluloid, it's awfully impressive anyway. As for the film itself, by which I mean what it is and what's in it, the Internet informs me that Les Vampires is considered one of the longest films ever made, though this designation feels like a cheat (and a useless one at that) since Feuillade's film is a serial -- I'd imagine you could find any number of serials that, when taken together, come out to at least 6 1/2 hours. In any case, as it's a serial, Les Vampires is broken up into ten chapters, running in length anywhere from 14 minutes to almost an hour. Most of them are closer to an hour than 14 minutes, and I don't really know what the deal is with that particular episode. It was a structural problem that Feuillade needed to solve, I'm guessing. But anyway, it's a very pulpy story, and very violent, occasionally sluggish, particularly during its rare but curious moments of domestic comedy. In terms of plot, it is, like most serials, more like a series of interconnected short stories than a novel. Lots of different schemes are planned and executed, with varying levels of success, by the titular crime syndicate, and they are thwarted, or not thwarted, by journalist Philipe Guerande (Edouard Mathe) and one-time Vampire turned crimefighter Oscar-Cloud Mazamette (Marcel Levesque). The whole thing ends in an astonishing and, I have to admit, pretty damn hilarious frenzy of dancing and violence. 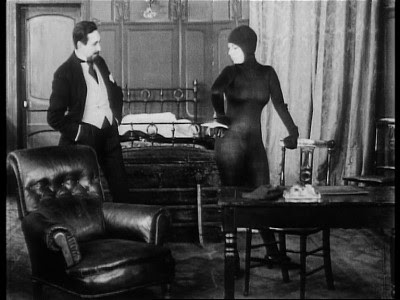 Which, if there's a problem here -- and I'm inclined to think there actually isn't one, but if there is -- it's that the film can be funny when it's not trying to be, and not funny when it is. I'm not too keen on mocking (what to me would be) the peculiarities and eccentricities of an older filmmaking era, but when faced with Les Vampires's insane climax, it's pretty hard to get all stone-faced about it. Meanwhile, Mazamette functions as the comic relief, in addition to being an action hero, and, well, one can only take so much mugging. But Mazamette is still interesting, in that initially it seems like he's going to be just the comic relief, a loveable scamp of dubious ethics but a good heart, but after a while the dubious ethics fall away and he's kicking in as many doors and shooting as many murderers in the face as the ostensible hero Guerande. And on top of that is the fact that the heroes themselves seemed to have been judged somewhat boring, a not unfair assessment, and so the lion's share of the film's running time is given over to the criminals. 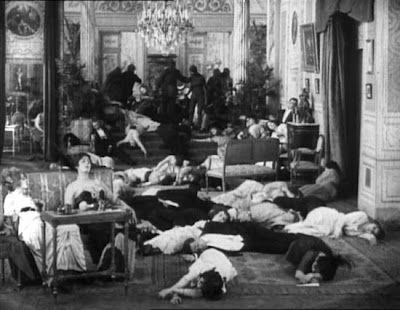 Chief among those guys being, of course, Irma Vep (Musidora), which I don't need to tell you is an anagram for something or other. I've seen Olivier Assayas's film Irma Vep, in which a film about that character is being made in modern France, and there's all sorts of interesting metatextual whatnots going on...that's a film I liked a lot, and wish now I had near to hand. It could only be more interesting now that I'm familiar with the source. But it's pretty easy to see why Assayas was drawn to Vep, and it's also pretty easy to see that Feuillade was just as taken. She's sort of the whole movie. Throughout, Grand Inquisitors and Grand Masters and various other higher-ups within the Vampires organization are killed, or imprisoned and then killed, or commit suicide, but Vep, a lieutenant in the organization, marches on. And while there's a certain level of figurative mustache-twirling in the performances of those male villains, Musidora really doesn't reach for the female equivalent -- it wouldn't be right to call her performance spare, but it's not exactly a villain performance, either. She is a bad guy, but she's not playing a bad guy. And she loops in and out of the strange stories, barely surviving sometimes, triumphing on a rare few other occasions, always eventually getting her comeuppance, which, eventually, is permanent. But Irma Vep, you understand pretty soon, is the smart one among this group of criminals. A devious and ruthless group, and a powerful one, whose leaders nevertheless die at an alarming rate, so they can't really be doing that much right.

Anyway, it's a hoot. Most of the time, anyway. It can struggle under the weight of repitition, which is unavoidable, I would think, with something like this. But if you're able to go with it, and it's not that hard to do, it's a lot of fun. It creates and tosses off and then forgets about a lot of good old-fashioned pulp strangeness, of the type that nobody who thinks they're recreating this kind of pulp actually manages to duplicate. It's the real thing, is what I'm getting at.
Posted by bill r. at 12:52 PM

I haven't seen this Feuillade yet, but I'm interested in that lights/tinting idea. I know I've seen that before, and off the top of my head I *think* something similar happens at the beginning of Keaton's 1923 Our Hospitality, when someone blows out a lamp and the tinting goes from yellowish to blue.

Like you, I've seen more silents this year than in my whole life previous, and it's been fun and illuminating.

Can I safely assume you've seen THE PHANTOM CARRIAGE? Because if not hoooollllyyyyy shiiiiit!

Regarding the whole good guys kinda boring thing, Feuillade reportedly got into a bit of trouble for purportedly glorifying terrorism / do-baddery with Les Vampires, and it's really interesting to contrast with his follow-up Judex, in which the good guy is both far more interesting and a bona fide fascist (although probably not in Feuillade's eyes, admittedly). Well worth checking out.

There has always been an explanation of sorts about Les Vampires that more characters died than were originally intended because the actors themselves died, either through war or influenza, depending on who tells the story. But now that I actually bother to look it up, it couldn't have been from the influenza pandemic because it was too early, and while several people in the credits apparently never worked again after 1915-1916, I can't find death dates for them. Clearly, I can't believe everything I heard on Usenet back in 1995. Who knew?