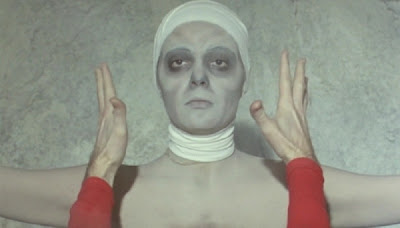 Yes, Dracula is in this. No, I don't know the answer to your follow-up question. The film, which is being released on Blu-ray tomorrow by Kino Lorber, is, in a word, or three words, loopy as hell, and good thing too, because something other than nudity needs to be there to pull the viewer through to the end. Which it just barely did in my case, and even then not without a lot of sighing. This is my first experience with the work of Renato Polselli, and I'm not claiming I've been put off for good, but just what the hell is this thing? Its baffling nature can best be summed up by the late-in-the-film revelation that all of this -- the naked women disappearing, the naked women having their hearts ripped out and their blood poured over what seems to be the naked corpse of a woman we come to learn is a witch named Isabella (Rita Calderoni), the burning of that same witch (which, curiously, did not seem to cause any actual burns, fatal though it apprently was) sometime in the past (the 14th century, I'm guessing), and so on -- relates in some way to, you know, Dracula. Who is barely in the thing anyway, and unless I misremember somehow chose to be a famous vampire, rather than having that office thrust upon him. But it's really a witch movie, and a Satanic cult movie, two things that can easily go hand in hand, although once Dracula shows up you wonder why Polselli didn't add a werewolf and a mummy. The mummy could be like "Hey, we have to help revive Isabella from her decades-long death slumber" and the werewolf could go "Okay." It would have made as much sense as anything else.

Along with Cardeloni, Black Magic Rites also stars Mickey Hargitay as the father of Laureen, also played by Rita Cardeloni, and therefore, obviously, pretty key to the whole Isabella revival idea. But the film is literally just an excuse for ample female nudity set against a variety of moods, from somewhat psychedelically lit terror, to softcore threesomes cut to the rhythms of whatever the Italian equivalent of "Yakety Sax" is. This latter, by the way, is actually featured in the films last third, and is returned to periodically, not for reasons of contrast to the Gothic horror of the rest of the film, but just because there's boobs there.

It's a strange film, is what I'm getting at, oblique only because Polselli doesn't seem to have much of an idea what's going on himself. Black Magic Rites would suffer terribly when contrasted against the work of, say, Mario Bava or Jean Rollin, the latter of which Polselli seems more consciously trying to emulate than the former, countrymen though they may be. But Rollin's films were bizarre, bloody, nudity-packed, and Gothic as Polselli's is, but in a completely different way. So though Polselli would come out the loser, it might be beneficial in a general way to pair this film with almost any given Rollin movie, just to note the difference between someone who's doing something because they mean it, and someone who's just taking a shot at it.
Posted by bill r. at 1:00 PM