One of These Dumb Beasts 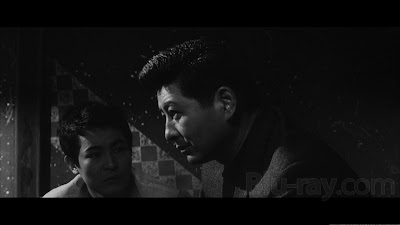 For killing a dumb beast -- or a human being, as the rest of us would have it -- Muraki served a mere three years in prison. This still seems a bit much to him, though, as he returns to Tokyo and his former life as a yakuza and gambler for the first time since his release, he doesn't show any hint of outrage or anger. He's more bemused that anyone could think anything might matter so much.

As played by Ryo Ikebe in Masahiro Shinoda's Pale Flower, Muraki brings to mind Alain Delon in Jean-Pierre Melville's Le Samourai. Both are quiet, efficient, seemingly bloodless until something or someone gets that blood flowing again, and even then the change is almost entirely internal. You'd never tell by looking at them that each man had chosen to potentially ruin themselves for the sake of someone else. Of course, the other big difference between the two men is that Muraki ruins himself for reasons that are about as dark and inhuman as one can imagine. Ostensibly, Muraki's fate is tied to Saeko (Mariko Kaga), the mysterious female gambler who catches his eye at the beginning of the film. But what Muraki wants for her is not particularly warming to the soul. Earlier in the film, Muraki and Saeko have a conversation that touches on Muraki's time in prison, and how he felt about killing another person. His explanation is the only clue anybody should need to understand Muraki's fate. 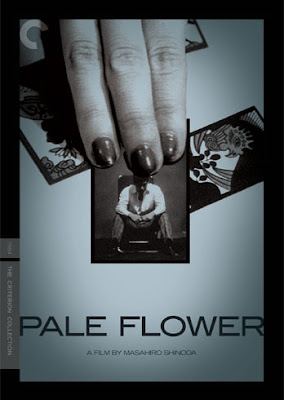 Pale Flower has gotten the Criterion treatment, and will be available tomorrow. I feel, or rather fear, that this will be received as one of their incidental releases, between all the big films or the more immediately popular ones. Already Pale Flower has been bookended on Criterion's schedule by Jonathan Demme's well-loved cult 1980s road comedy Something Wild and Charlie Chaplin's frickin' The Great Dictator, for Pete's sake. I hope that Pale Flower does not get overlooked due to its relative obscurity because I found Shinoda's film to be thoroughly magnificent. The comparisons to Melville, who I idolize, do not stop at Ikebe's characterization and performance. Both in France and Japan, gangster and crime films of those countries' respective New Waves could have something of a post-modern commentary on films-as-films element (see Breathless and Band of Outsiders and Tokyo Drifter), or at least those are the ones that tend to become most famous as the years pass by. But in Pale Flower, Shinoda made a film, as did Melville, repeatedly (and Shinoda's entirely not post-modern countryman Akira Kurosawa with Stray Dog and High and Low and so on), that is not only amazingly assured and quietly stylish, but actually about its world and its people, the gamblers and killers, and the bosses who join forces and eat lunch in big empty rooms while discussing their families and their weight, and the fate of their men. 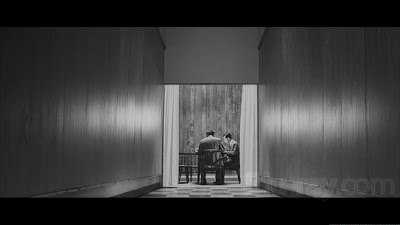 Pale Flower is very pure in its noir motives, more pure, even, than many of the American films that influenced it. Some of the classic noirs -- though by no means all -- had a tendency to pull back not only on certain implications about their characters, but about the very doom the rest of the film seems to be portending. Films like Gun Crazy and Angel Face and Scarlet Street are so bracing in part because of the films in the genre that don't go so far. Pale Flower, meanwhile, does go that far, and is so weary about it. Muraki knows who he is and what he's capable of, but instead of either fleeing his nature in terror, or maniacally embracing it, his attitude is one of morbid acceptance. He may not be thrilled about this, but he knows better than to fight it.

And of course it's all due to Saeko, the woman, the laughing, happy gambler who fills all the gambling halls to which Muraki takes her with a new energy that the slumped and blank-faced men who essentially inhabit those places haven't felt in a very long time. But no one feels it like Muraki, and no one is willing to follow that energy quite so doggedly as Muraki, either. Or maybe they would, if only they could. It's not so much that either only has eyes for the other; it's more that they were built for this. The fact that circumstances and a certain lack of enthusiasm on Muraki's part is able to contain their behavior and fates to the world of organized crime can only be regarded by the rest of us as very fortunate.
Posted by bill r. at 12:13 PM

It's fantastic! You should be!

Something tells me this wasn't the comment thread Bill was counting on. But by god it's the one he got.

And that's good enough for me.

It's the one I deserve.

I haven't seen this in a long time but I remember liking it a lot, too. I also vividly remember the world-weary gangster vibe you talk about here; it's a very grimy, gritty film. I've randomly dipped into Shinoda's work here and there and always really enjoyed his films, though all the ones I've seen (this, the loony Samurai Spy, the dizzyingly complex historical/political thriller Assassination, the stately and melancholy Ballad of Orin) are very different from one another. He seems like a very interesting director.

Ed, this is the only Shinonda film I've seen, and I'm hungry for more now. So hungry, in fact, that the shrugging attitude towards his work that one guy is showing over at SOME CAME RUNNING is making me angry. And I've only see PALE FLOWER!