...was supposed to lead to something, some grand new form of Hollywood Gothic, classic horror stories of vast ambition and bold artistry. What it led to instead was this: 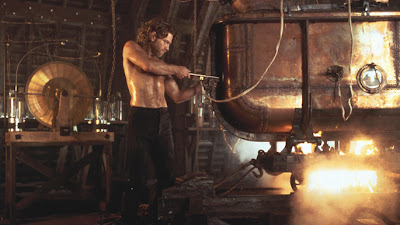 Zoinks, indeed. Another of Coppola's big dreams down the toilet (technically, the petering out happened a bit more slowly, as Coppola would go on to produce Sleepy Hollow and a TV version of Dr. Jekyll and Mr. Hyde, but Burton's film -- which I like -- is simply Burton doing what he does, and it's very much not any kind of reinvigoration of the classics, as the Stoker and Shelley films were meant to be). It's not as if the former was any kind of great shakes to begin with, but the latter really is massively alarming. And yet I keep returning to both, but particularly, at least in my head, the latter. I don't know what it is. It's true that when I was younger, I loved both films, but then I grew up, and even if plain old common sense and earned wisdom wasn't enough to turn me agape, in a bad way, at Branagh's massacre, reading Mary Shelley sure enough was. So really, I should simply recoil. But every five years or so, I go back to it.

I can only assume this is because of the potential it represents, or represented. Now it only represents folly, of a particularly shirtless variety, but at the time it was supposed to be the next step in a new wave of stylish, cerebral, big budget horror. Maybe it's just that I sometimes like to wallow in the ridiculous excess (I do, up to a point). But mainly I watch it with the thought that it would be very, very nice if the movie didn't suck so bad. The trouble is that I'm well past the point where I'm able to fantasize about the film growing on me, or revealing its genuine quality that the blinders of critical consensus had kept me from seeing. So the disc goes in the player with a weary sigh now. But even as a not-at-all-good version of what it was trying to be, I still like that it tried to be it.

I consider Coppala's Dracula to be one of the worst movies I love. I mean it does have the single worst reaction shot of all time (,http://www.horrorphile.net/images/bram-stokers-dracula-keanu-reeves1.jpg) Anthony Hopkins gives one of the strangest off key performances I've ever seen, and you have Winnona Ryder's and Reeve's sub Dick Van Dyke accents.

But gorsh it just looks so pretty. And Gary Oldman is at his Gary Oldmanist, and Tom Waits makes a great Renfield.

Mary Shelley's Frankenstein on the other hand s a film I don't even get the guiltiest of pleasures from. And to a large extent its tainted the entirety of Kenneth Branagh's career for me. Depending on the day I am apt to name it the worst film I've ever seen.

Here's hoping that one day Del Toro gets to make his vision, so the poor old monster can show his face again.

Yeah, well, it's pretty bad. I have it on right now, and it must represent the worst acting of Branagh's already very spotty career. But if I'm forced to be positive -- which I'm not, but I'm going to be -- I do like DeNiro's creature. Or at least, I remember liking him. He's articulate, which he's supposed to but rarely allowed to be, he looks good, he's menacing and sympathetic. All that. I may have to get back to you on that.

I also like that John Cleese is in it. I like the fact that he's in it more than I like what Branagh actually does with him, but, well, there it is.

So we don't like Frankenstein? I'm partly serious with that question, I haven't seen it since its release, so that makes it 17 years or so, but I do have some memory of a few very creepy scenes. I guess I also recall Branagh being un-Branagh like, sort of going the American route of the highly toned physique, a Stallone-lite or something, rather than the British sophisticated actor route (as in Ralph Richardson or John Gielgud, can't see those guys taking off their shirts and looking like they've spent a few months in the gym).

This question is only partly inspired by this post, but why oh why does Hollywood ever cast Keanu Reaves in classical roles? Hasn't it become obvious that the only accent he can do is southern California surfer?

Of the two, I think the Coppola is is the more obnoxious failure, a movie I could barely get through once and am not likely to give another shot.

The Branagh doesn't work for me at all, but at least it feels like an attempt to do justice to the book it's based on. Like poor old Frankenstein, alas, Branagh's hubristic ambition ultimately got the better of him, leading to a ridiculously grandiose, lumbering mess of a movie that murdered all that was good and decent about the original story.

Coppola's mess is just laughable from the start. Absurdly self-indulgent where it's not ridiculously inept, and impossible to take even slightly seriously at any point, it even manages, on top of all that, to be excruciatingly boring for the most part.

Patrick - Well, I don't know about "we", but I don't know anyone, certainly no one who has seen it recently, who likes the film. I watched it again yesterday, and outside of DeNiro -- who I really do like -- it's almost entirely dire. Maybe give it another look? And if you still like, well, it's no skin off my nose.

Kelly - Reeves isn't often cast in period films. I can only think of three instances off the top of my head, and the last time was in MUCH ADO ABOUT NOTHING...which was directed by Kenneth Branagh!!!! Full circle, people.

John - I can't blame you for hating Coppola's film, but I don't. I merely dislike it. Sometimes I dislike it very, very much, but other times I'm more forgiving. I can pick out more performances and moments that I enjoy from DRACULA than I can from FRANEKNSTEIN, anyway. I like Tom Waits and Gary Oldman, for instance, and some bits of creepy weirdness here and there. Plus that movie has nudity.

John's right about Coppola's Dracula being boring. I find Brannagh's work boring as well. When any film seems more like a ragtag collection of disconnected scenes and random images, boredom besets the mind quickly. Neither movie has any feel for pacing or flow. They're just frenetic. Pointlessly so.

I was fairly obsessed yet still disappointed with Coppola's DRACULA when it came out. That obsession, however, is comprised of four words: SADIE FROST AS LUCY. I mean, gosh. Truly one of the vampire ladies for the ages.

That said, I *hated* how it billed itself as a faithful adaptation of Stoker's novel when it was anything but. I hate Dracula as some lovelorn old fop; and actually, Richard Matheson had already done the Dracula/Mina as star-crossed lovers from the past in the Dan Curtis DRACULA with Palance, if I recall correctly. So it wasn't even *original.* Give me the Louis Jordan BBCTV one from '77. Then again, I don't think any one single Dracula movie has ever done the novel justice... but does a filmmaker *need* to? They just need to get the mythology right, and Coppola and screenwriter Hart do *not* (I'd forgotten till just now he also wrote Branagh's film).

But the score is quite effective (perhaps you've noticed it used in various movie trailers over the years; I know I have) and I think the opening, BS as it may be according to Stoker, is damn chilling. Oldman does fine, fine work throughout. I did like, however, Coppola's linking of him with the Beast from Cocteau's BEAUTY AND THE BEAST. And Jesus Christ, too, I suppose. *That* seemed legitimately Stokerian.

But Branagh's FRANKENSTEIN is, along with the Brando version of DR. MOREAU, one of the worst major motion pictures I've ever paid to see in a movie theater on opening night.

But Branagh's FRANKENSTEIN is, along with the Brando version of DR. MOREAU, one of the worst major motion pictures I've ever paid to see in a movie theater on opening night.

Neither movie has any feel for pacing or flow. They're just frenetic. Pointlessly so.

Exactly. Two pretty moody slow-burning classic horror stories rendered bright, sterile, and fast-paced as a typical Hollywood blockbuster. The effect was kind of like trying to watch a stale Hammer costume horror flick and a brash Broadway musical at the same time.

Dr. Moreau didn't fare any better, but at least the too-brief spectacle of Brando hamming it up majestically in the title role provided some distraction.

Within a certain group of moviegoin friends of mine "Islad of Dr. Moreau" is code for "Really BAD movie!" We'll be at some Godawful thing at the multiplex, and inevitably, one of us will lean into the rest of the group and whisper "Island of Dr. Moreau..."

Obviously I'm in the minority here, but I really like both. As an opera lover and a formalist, I love those qualities in each film. Both are flawed, and obviously Coppola's is less so, but I give Branagh points for going out on a limb. FRANKENSTEIN's got some genuine chills (anything involving Bonham-Carter's death and post-mortem). Shut the sound off, pop in a CD of the soundtrack, and you've got quite a nice basis for a silent movie there, too.

You miss so much when you think nobody's reading a given post anymore!

Well, broadly: THE ISLAND OF DR. MOREAU ain't good, I agree, but I don't think it's badness has a patch on Branagh's film. It at least has Brando, as John points out. Plus, I honestly don't remember getting a true "What the fuck are they doing???" vibe until the last third of that film, or so, whereas I had that feeling from the very beginning of Frankenstein.

And Tony, I don't entirely disagree with you -- only almost entirely. There is a shot post-Elizabeth's death, when Branagh is getting her body ready for reanimation, when he's dragging her corpse, and the camera is following her feet dragging across the floor, and the severed head of the nanny (or whatever) slides in an out of view. That's a nice, creepy little shot. But it's noticable mainly because the effectiveness is so isolated.

I remember when I first saw it thinking the moment when the reanimated Elizabeth breaks the lantern over her head and bursts into flame was really amazing and powerful, but I watch it now and think "Why in the hell did she do that? Disturbing and blasphemous and immoral her reanimation may well be, but just a minute ago she seemed (creepily) happy to be dancing with Victor. Now she sees two guys arguing and decides 'That's it, I'm burning myself alive'?"