Over at the TIFF Lightbox, a program of the films of Kelly Reichardt has begun (it started yesterday, in fact, so damn you to hell, Blogger), comprising all of her work to date inlcuding Meek's Cutoff, her newest and highly acclaimed Western, of all things, starring Michelle Williams and Bruce Greenwood. Meek's Cutoff is a film I'd like to see for a number of reasons -- I like Westerns and Bruce Greenwood, to name but two -- and at the top of that list is that I'd like very much to see the director behind Old Joy and Wendy and Lucy, Reichardt's previous two films, break out of the Pacific Northwest hippie-outcast doldrums which has...well, frankly, it seems to have worked out for her so far. She is a Filmmaker to Watch, after all.

But look: Old Joy, for instance, is a film about a couple of modern-day hippies, the kind of people who dance to drum music, jump over bonfires, and hang out with "really amazing people". One of Old Joy's hippies, Mark (Daniel London) has grown up and married and moved on to a life of home ownership and responsibilities; the other, Kurt (Will Oldham) is really pretty much the same kind of guy he was when he and Mark were best friends, hippies forever, back in what we're to take to have been the good old days. Kurt and Mark have a bit of a day planned, and it's the first time the two of them will have gotten together in a quite a while. The joy of this day is tempered for Kurt by the fact that Mark is no longer like him, and Mark's happiness is cut by the slow-dawning realization that he's no longer the free spirit he once was, and Kurt still is. 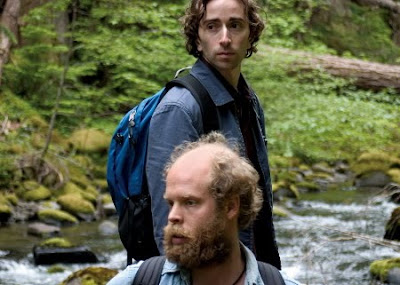 Old Joy surprised me in one way, by inspiring me to look Will Oldham up online, which revealed that he played the fiery boy preacher in John Sayles' Matewan and that in his subsequent music career he wrote "I See A Darkness", a song I count as among my all-time, close-to-my-heart favorites (and I know it through Johnny Cash's cover, on which Oldham sings background). Beyond that, though, it's a nicely photographed film that's about as rote and schematic as a superhero origin story. Old Joy is the kind of movie that has a slightly oddball title, which in the film's final third is explained in a non sequitor monologue by the most charmingly offbeat character. And if one were to use a Venn diagram to chart the overlap between films that have odd titles which are explained in random yet meaningfully vague speeches, and films that are about the compromises and frustrations of growing into adulthood, what you'd end up with would basically be a circle. And also Old Joy.
Reichardt's follow up, which she co-wrote with frequent collaborator Jonathan Raymond, Wendy and Lucy does sort of mess with the free hippie archetype a bit -- an archetype that even Old Joy doesn't seem completely comfortable with, to be fair. In Wendy and Lucy, Michelle Williams plays the former and Lucy the Dog plays the latter. Wendy and Lucy are in Oregon, making their way to Alaska, where Wendy will work and live and, she believes, be happy off the grid. She minds her money very closely, and seems to be doing as well as one could expect when everything starts to go wrong. Her car breaks down, she runs out of dog food, decides that shoplifting some Iams is a better financial decision than paying for it, only she gets caught, so it isn't, and after the cop hauls her away, her dog goes missing, and so on. Wendy and Lucy is a bit Von Trier-ian in its ruthless piling up of misery before its female protagonist, though Reichardt and Raymond lack Von Trier's imagination, while keeping some of his too-easy villainy signifiers (the worst person in Wendy and Lucy is wearing a crucifix the size of my fist). And then, is it just me, or is anybody else annoyed by films that construct scenarios that are meant to elicit from the viewer sympathetic thoughts such as "If someone's trying to drop out of society, why can't they just steal? America is such bullshit." 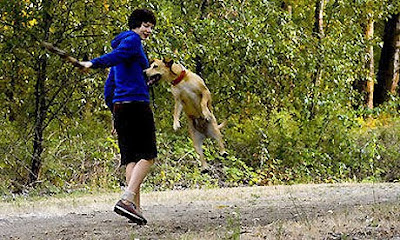 Still, it's a good move by Reichardt to keep the reasons behind Wendy's abandonment of normal civilization a secret. If we knew, then we'd know just what to think of her. As it is, it's not hard to think Wendy isn't terribly bright, but it's also not hard to hope to God she gets her dog back. Depicting a lonely young woman forcibly separated from her dog might seem an unfair way to wring some tears, and it is, or can be...okay, it is. But Wendy and Lucy does us the honor of not including a single bad performance. Everyone, from the note perfect Williams, to the ever welcome Will Patton as the mechanic checking out Wendy's hopeless car, to Walter Dalton, who gives what I believe is the single best performance in the film as a security guard who, after Lucy goes missing, becomes Wendy's only friend. Dalton is quietly sensational, and Reichardt, and her actors, have a wonderful eye for the little details of human speech and movement. There's a moment in Wendy and Lucy when Michelle Williams is using Dalton's cell phone as he stands off to the side, and she, being a stranger in town, repeats back the geographical location the speaker on the other end of the line has just giver her, and Dalton nods and gives a casual thumbs up. He knows that street, it's no problem. That's how people act, and Reichardt gets it on film. So that's good. There are pluses to be found in Wendy and Lucy, and even in Old Joy which despite my complaints nevertheless has a comforting, Pushcart Prize for Short Fiction runner-up sensibility that's easy to go along with, even if it is ultimately sort of limp and dopey.
But oh, what of Meek's Cutoff? You got me, chief. It's a film I'm no less anxious to see having checked out Reichardt's two previous films than I was while reading about it's charmed journey through various film festivals, back when I hadn't seen a frame of Reichardt's work. Given my, let's say ambivalence, towards what I've now seen, my own undiminished curiosity about Meek's Cutoff intrigues me. I look forward to satisfying that curiosity one way or the other.
Posted by bill r. at 9:10 PM

I haven't seen any of Reichardt's films yet, but I'm definitely interested.

Will Oldham is a great songwriter, if you like "I See a Darkness" you should definitely track down more of his work. His album Viva Last Blues (released under the band name Palace Music) is one of my favorites, and the Bonnie "Prince" Billy (another of Oldham's aliases) album I See a Darkness is also very good.

Bill, I appreciate that you focus on Reichardt's content more than her style. But I'm captivated by her style, which strikes me as unique in contemporary cinema. Am I missing an obvious counterpart?

Bill, I just saw MEEK'S CUTOFF today, which I predict will land on my list of 2011's best films.

I'm very curious to hear your reaction to it since you are actually the first critic I thought of when I left the theater. I won't go into the reasons why, which I'm sure you'll figure out. It would give too much of the film away.

Tony, I haven't seen it but I predict that it will land on your list because you have predicted it and I trust that you have a good idea what movies you think are good.

Bill, I completely forgot I even watched Wendy and Lucy. It was about a year ago and I very mildly liked it. I watched it for Williams because I truly love her as an actress but came away thinking the writer/director had potential to do more. I'd like to see more by her.

Ed - thanks for the tip. His having written that song is reason enough to dig deeper. I'll probably start with the I SEE A DARKNESS album.

Christian - this hardly counts as obvious, but two films I thought of are Azazel Jacobs' THE GOODTIMESKID and Aaron Katz's COLD WEATHER. Visually I think they're on Reinhardt's wavelength, though tonally they're fairly different.

Tony - damn you! I almost got a screener for MEEK'S CUTOFF but ended up getting hosed by a technicality that was never really explained to me. Now I have to be patient, which i'm not great at. Anyhow, this post was originally conceived to be about all three films. Grrrr.

Greg, that's more or less how I feel. Reinhardt is a potentially good filmmaker who is currently making films that I don't really care about. But MEEK'S CUTOFF is, or sounds, like such an interesting departure, and i'm intrigued.

Lucy was also excellent as herself, a task frequently undertaken and as frequently left unaccomplished.

She was! Both films, in fact, feature good dogs.