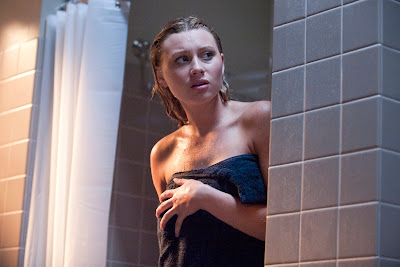 The Roommate (d. Christian E. Christiansen) - If Single White Female, the 1992 erotic thriller directed by Barbet Schroeder, has one commendable feature -- apart from the possibly endearing feeling of cognitive dissonance you'd get if you viewed it as a double feature with Koko: A Talking Gorilla -- it's that it's a genuinely sleazy movie, or as sleazy as a slick Hollywood film with reasonably big stars in the lead roles is going to get anyway. Single White Female has lots of nudity, a fair amount of sex, and is sprinkled with ludicrous violence. It is, in other words, what you want it to be. By the end, whether you wanted it as much as you thought is a different question entirely. The point is, no one who watched that film with a clear mind could later claim to have been rooked.

So why is The Roommate, which is a remake of the Schroeder film in all but name, so relentlessly squeamish? Because it's aimed at a younger crowd, one presumes (Single White Female was a movie for grown ups, after all). The film stars people with names like "Leighton" and "Minka" and "Cam" and "Billy Zane", and boasts maybe five combined minutes that aren't smothered by the shittiest music you've ever heard. It's the kind of movie that has some completely unidentifiable pop song playing over the opening credits, which leaps almost immediately into the first big scene, at a frat house party at which some white noise frat pop band is playing, and so you have ten minutes straight of this kind of sound that quite frankly dominates everything, including dialogue, but also you're maybe supposed to even like this because Minka Kelly, who's the hero of The Roommate, ends up falling for the white noise band's drummer which, at this level of accomplishment, is a bit like falling for the long snapper. Then later her roommate, played by Leighton Meester, starts to obsess over her and kills a cat and after that a person. Like I said, it's Single White Female, except it very delicately skirts around showing anything that you might have actually paid money to see. It's a big fat phony of a movie, basically, but more than that it's unbelievably dull. It is, in fact, the dullest hour and a half I've experienced all day, and earlier today I was at work. 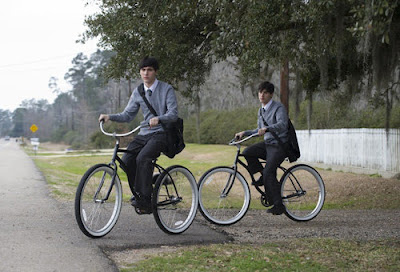 Seconds Apart (d. Antonio Negret) - This one, the first real evil twins movie I can think of since -- but this can't be -- Dead Ringers begins with a scene the aim of which would appear to be to completely refute the cynically coy philosophy of movies like The Roommate: a group of (sigh) college guys at a (sigh) frat party are playing cards and drinking and saying dirty things about ladies when the above-pictured twins named, because movie twins must always have Biblical names, Seth and Jonoah (played by real, honest-to-peaches twins Gary and Edmund Entin) suddenly and briefly appear. Following their departure, the frat guys change gears and begin a casual and bloody game of Russian Roulette. So okay, it's not exactly Lucio Fulci, but it's not posing either. Unfortunately, the intriguing first ten minutes or so of Seconds Apart pretty much gives up everything the film is going to have to offer. The twins are conducting some strange and dark "experiment" in the realm of human emotion, and this involves using their psychic powers to force people to commit suicide, and we see this over and over again as they're pursued by a conveniently perceptive police detective (Orlando Jones, a little self conscious in his "serious actor" mode, but really not bad at all) until a house catches fire, as they tend to do in evil twin movies.

Seconds Apart really operates on only one level of intrigue, and that's the level at which it begins. So there's a bit of dramatic miscalculation at play here, and resultant flatness of narrative. But the attempt is there, at least, I guess, which is becoming something I'm prepared to give credit for more than I might have in the past, and this in itself depresses me. And Seconds Apart is really not a very good movie, truthfully. But I'll tell you, late in the film Orlando Jones has a scene with an actor named David Jensen, playing a fertility doctor whose drug addiction Jones clues into and uses in his interrogation. And now you watch Seconds Apart and you watch David Jensen and you tell me that there aren't actors out there who play their parts and do their jobs, no matter the role, and no matter the film. Praising Seconds Apart for not being a cynical cash-in might be depressing, but seeing David Jensen's performance is actually a bit exhilarating. Because good work is maybe being done everywhere, if you just look.

That's two I'll be not-looking out for, then. Somehow, "Seconds Apart" looks & sounds a little like a weak re-jig of "Funny Games" (the original of which I liked a lot), with pretty much none of that movie's power to disturb. Hell, a bunch of frat guys playing Russian roulette sounds like an event I'd buy front-row tickets to, maybe even put a couple of bets on if the odds are decent.

...good work is maybe being done everywhere, if you just look.

Sure, that's always been true, even of a lot of overall crummy and/or forgettable movies. But a couple of isolated moments or elements that work (if only by contrast) can never redeem a movie that overall fails to interest or move me.

SECONDS APART is nothing like FUNNY GAMES, actually. It's a creepy twin/supernatural horror film, through and through. And in fairness, I'm not sure the audience wasn't supposed to feel a certain catharsis during the Russian Roulette scene. Plus, I don't know the odds in this instant, but two out of the first three guys really got gypped in that regard.

Not that I'm saying you should see it, even for David Jensen. In that case, I was just really impressed with the work he did in that one scene, and thought I should highlight it.