The Collection Project: You Oughtta Have Respect for Things That Used to Be 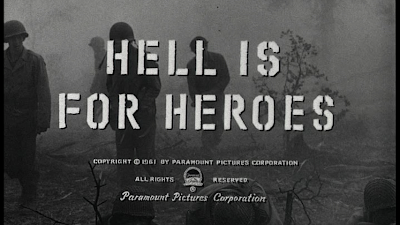 In Hell is for Heroes (d. Don Siegel), Steve McQueen plays Pvt. Reese, a good soldier, uncommonly brave, who brings his squad -- pinned down by German troops along the Siegfried line -- to the brink of extinction. He does so because he's brave, but it's a bit more complicated than that. Reese is angry, beaten, silent. He's shell-shocked, but no one knows his business better. As the hours tick by, and the Germans manage to begin picking off his fellow soldiers, a frustrated need to do something, to take action, and damn their orders, takes hold of Reese, until he's able to talk his new commanding officer, Cpl. Henshaw (James Coburn) into a reckless mission that involves crawling through a minefield after dark to take out the German pillbox that has been raining hell on them for two days.
.
Hell is for Heroes is an odd, but wildly successful, mix of typical star-studded WWII Hollywood fare (the almost bizarre cast includes not only Bobby Darin, but also Bob Newhart, whose status as comic relief is made so explicit that at one point they actually put a phone in his hand, so he can carry on a one-sided conversation about morale and entertainment for the troops) and merciless This-Is-War! brutality. The performances are excellent, top to bottom -- honestly, I don't think McQueen was ever better -- and the direction and writing are consistently sharp. But it's Reese's journey from calloused grunt with a keen mind for combat, to arrogant failure, to some kind of redemption, that gives the film its unique punch.
.
Because, as I say, Reese fails. Reese has been clashing with Sgt. Larkin (Harry Guardino) about the best way to extract themselves from their seemingly hopeless situation, with Reese pushing for his night-time pillbox assault, and Larkin, who's in command, insisting they wait for the rest of the command that is due to reinforce them, but has been delayed. When Larkin dies, putting Coburn's Henshaw in charge, a window opens for Reese to do things his way, to allow German artillery to win his argument with Larkin for him. Henshaw doesn't know what to do, and believes Reese does. He's wrong.
. 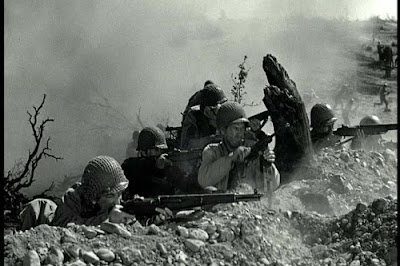 The fact that the bitter, war-hardened loner in Hell is for Heroes, the guy who insists he knows better than the brass, does nothing with these traits but bring death upon his fellow soldiers, proving the usually fumbling brass correct, counts as a subversive twist to the Hollywood war movie formula. When the remainder of Reese's squad is finally relieved, Capt. Loomis (Joseph Hoover) lays into Reese:
.
You had orders to stay here on the ridge and hold it. You knew that! What about Kalinsky? What about the man you left in the field? And you say you gave the order, huh? Reese, you're a private, you don't give orders, you take them!
.
And he's right, clearly, because look what happened? Reese knows it, too -- McQueen's face in this scene is a jittery, sweaty mess, his eyes popping with despair, his mind, you sense, slipping away. Combat is what he knows, or thought he knew. It's the only thing that was left to him, and this is what he did with it. Everything that kept him moving has turned to dust, and men died for it.
.
As I said before, a certain kind of redemption does come Reese's way, and while it's real, and worth something, it's also hopeless and grim, the kind of gut-churning victory one only finds on the battlefield.
.
Have a good Memorial Day Weekend, everybody, but don't forget what it's all about.
Posted by bill r. at 8:19 PM

I'm pretty sure my father caved and bought a vcr back in the day for the sole and express purpose of taping WWII movies. He was born in '34, grew up with the war on the radio, and his fascination with the conflict has never lagged. There's a good couple dozen WWII movies I've probably seen 50 times apiece- usually with him on a Sunday afternoon. This was on of the heavy rotation titles. It's been far too long since I've seen it. I think I'll bring a copy by the old homestead this weekend. Thanks for the reminder.

I'll never forget the time I was watching this after having acquired a knowledge of Bob Newhart's career and realized in a rush what a call-out to his persona that telephone routine was at the time. As a kid it was a slightly mystifying sequence that I just sort of shrugged at and took in stride. A similar thing happened when I got older, noticed the production date of KELLY'S HEROES, and picked up on the contextual significance of Donald Sutherland's Oddball.

Finally- I really wish we'd had a chance to watch Steve McQueen grow old on film. He was always one of my favorites growing up. If I've seen this film 50 times, I must have watch THE GREAT ESCAPE close to 100. Would've loved to see him in some late career, Eastwood-esque, I-may-be-70-but-I'm-still-Steve-Goddam-McQueen type roles.

Otherbill, that Newhart sequence is still a bit mystifying. There's a stretch of the film that's really given over to the Bob Newhart and Bobby Darin Show. I love both those guys, but you can't help but wonder, at that point, just what kind of war movie this is supposed to be. That one film can contain that section, as well as the early scene with McQueen in the tavern with the waitress, AND that ending is, well, sort of strange. But it all somehow comes together and works. I have little doubt that Newhart was shoe-horned in there by the studio, but what the hell. He's Bob Newhart!

McQueen was such an unusual talent. Jason Bellamy's McQueen blogathon a while back actually taught me a lot about the guy, and gave me a better appreciation of his ability to deliver performances like this one -- which is truly outstanding -- despite his limitations.

Also, my dad was very similar (he was born in '31), though I don't know that he ever willingly recorded anything with the VCR. He did like having PATTON and ZULU close to hand (I know ZULU isn't WWII, but I bet your dad's a fan of it, as am I).

Wow---that is a fantastic twist! I've been waiting for years to see a movie where the maverick who ignores the rules turns out to be wrong; didn't realize it had been done long ago.

Reminds me a bit of NIGHT OF THE LIVING DEAD, actually. Ben is our noble hero, and he's never explicitly dressed-down in the movie, but in retrospect, his every decision was wrong, while the obnoxious dickhead in the basement was right.