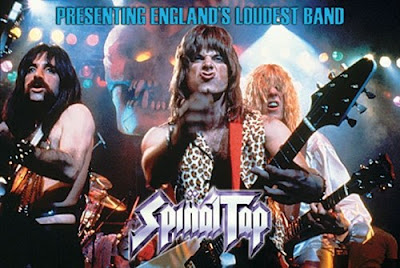 There's nothing left to say about This is Spinal Tap (d. Rob Reiner), and besides, to say almost anything at all is to begin chipping away at the joke until it's all gone. But this film reaches such a high level of comedy, and has been so relentlessly quoted, that it feels like we take it for granted now. What film comedies these days are as endlessly creative as this one? Even the best of Guest's follow up films (and I actually think Waiting for Guffman might, in some ways, be better than Spinal Tap) don't have the sense of verisimilitude that Reiner captures so brilliantly here. If what we were watching wasn't so absurd, there would be no reason to believe it wasn't true.

This is going to be one of those lazy posts that I sometimes do. I just wanted to remind everyone that comedy doesn't often come with this much exuberant imagination, or even, well, comedy, as This is Spinal Tap. Cherish it! Watch it tonight! Also, remember: David St. Hubbins believes virtually everything he reads, Nigel Tufnel will rise above it, you should really check out Derek Smalls' new Jazz Odyssey, and Tucker "Smitty" Brown is just as God made him.
Posted by bill r. at 6:47 PM

Don't you hate it when the "eleven" joke is the first joke mentioned whenever you bring up this movie? I love this movie so much though, I don't care what jokes people bring up, as long as they realize how much good stuff is here, like the very brief discussion about the Jack the Ripper musical - it's almost a throwaway and yet I'll occasionally, and for no good reason start singing, "Saucy Jack".

You're a naughty one, saucy Jack!

One of the main things that bugs me about the "11" joke is that when it's quoted by someone, as long as the quoter puts it in a context other than amp volume, they can act as thought it's their joke, and they often do. Beyond that, it's just one good joke in a film bursting with dozens of better ones.

The line I mentioned, when Tufnel says he'll "rise above it", is much funnier to me.