Hold On to the Pain

.
For a while now, I've been kicking around an idea for a new way to approach the horror novel -- not the reading of them, but the writing of them. Too often, and increasingly, horror novels tend to devolve as they go along into rote fantasy or action stories. Neither of which I have anything against in themselves, but each has a tendency to ruin, and change, the tone, mood, and significance of what has come before when they're stitched on as the last third of a horror story, and rarely is that change a positive one.
.
So my idea -- and I have no idea for an actual story, just a form -- is to write a more-or-less naturalistic story about people, and their day-to-day lives, in which the horror, specifically of the supernatural variety, appears intermittently, almost as a subplot which can comment, or enhance, or color, or whatever, the more realistic story that surrounds it. Perhaps you can guess at the many pitfalls inherent in this idea, but in any case they are many, and I haven't cracked it yet.
. 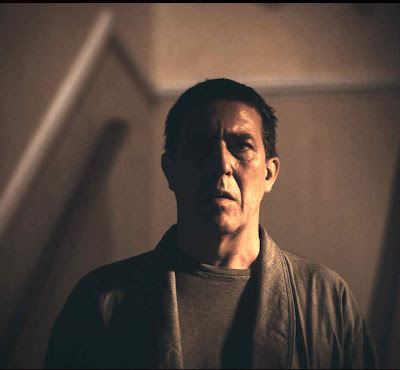 Conor McPherson has, though, or at least he's come awfully damn close. His new film The Eclipse (based on a story by Billy Roche, who appears in the film in a cameo role) is pretty extraordinary, in my view, in the way it uses supernatural horror as no more than one element of a story about a widower named Michael Farr (a superb Ciarán Hinds) who volunteers as a chauffer at an annual Irish literary festival. In the film, he chauffers two writers -- Lena Morelle (Iben Hjelje) and Nicholas Holden (Aidan Quinn), the latter of whom is a particularly obnoxious and self-involved American-Irish writer who is one of the festival's big "gets". Farr also has two children who he's raising by himself since his wife's passing a few years previously, and an elderly father-in-law (Jim Norton), who lives in an nursing home. This father-in-law begins appearing to Farr as a corpse, after a short period when Farr hears strange sounds in his home, and even screams, not just outside his home, but outside, or in, Lena's hotel, as well.
.
These elements appear sporadically, though, and often take a back seat to Farr's relationship with the two writers. Lena is a sweet woman, a good writer who is shy of the public. Her friendship with Farr is based, in the beginning, on a shared sadness, or a haunted quality, though what specifically haunts Lena, we don't know. Lena's romantic past with Holden also comes into play, as does Holden's aggressive pursuit of her. He's married, but claims to be unhappy, and claims further that Lena brings out a kindness in him that he thought was gone, though the audience never quite notices that.
.
What was startling to me as I watched The Eclipse was the realization that these various threads -- the supernatural, the love triangle, Farr's strained relationship with his children, and his continued grief over the loss of his wife -- all play out in parallel, as different facets of Farr's life that never quite intersect. Both he and Lena hear a chilling scream one night, that they both try to pass off as the cry of a bird. When Farr's father-in-law appears to him as a corpse, he initially writes it off as dreams or hallucinations, until he feels he no longer can. He does not, however, hire a paranormal investigator to solve the mystery, nor does he consult occult texts. The best he can do is make a fumbling, ultimately abortive, attempt to tell Lena about it.
. 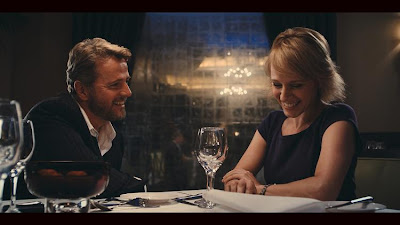 What makes this film so fascinating also occasionally works against it. McPherson uses pretty standard "jump scares" for his moments of supernatural horror, and these sometimes sit uneasily with the spare, quiet naturalistic scenes (indeed, the most effective and visceral moment of horror is not supernatural at all). But if you want the supernatural to sit back a bit more, how far back do you go before this whole approach to the genre becomes too smoothed over and beige? And then that question raises another one, which is how much do you want your new horror model to be explicitly noticed as such, rather than simply as a story about these people in these situations? I don't know. Still, if the "scare" scenes in The Eclipse don't always quite work, I'm glad McPherson chose to present them so directly. The harder to ignore they are, the better.
.
In a way, The Eclipse brings horror back to its roots, which are the emotions of fear as they pertain to grief and mortality. This is often what supernatural horror is meant to represent, but most of the time the characters who face it are meant to wage war on it. The ending of The Eclipse will (and has already done so) elicit from audiences reactions like "That's it!?", but I think the film ends on just the right note. Farr deals with ghosts and hauntings the way the rest of us deal with our real-life fears: he learns to live with them.
.
- - - - - - - - - - -
.
The Collection Project Film of the Day:
. 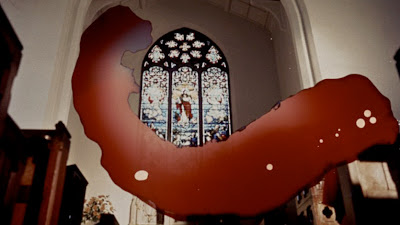 The problem with finding a film in my DVD collection to hitch on to the back of my review of The Eclipse is that, to my mind, The Eclipse is, however subtly, a Brand New Thing, and however many horror films can be called that (more to the point, however many horror films that can be called that that I own), it's hard to think of a brief way of approaching any of them that won't come off as banal.
.
So I'm not sure if Don't Look Now (d. Nicolas Roeg) can, or could have been, called a Brand New Thing when it came out in 1973, but it does have a connection with The Eclipse in that it's a horror film rooted in grief. In Roeg's film (based on a story by Daphne du Maurier), the grief is being suffered by a married couple (Donald Sutherland and Julie Christie) who lost their daughter. They travel to Venice in an attempt to rejuvenate themselves psychologically and emotionally, but are haunted by a small, fleeting figure in a red raincoat that resembles their daughter, and by unnerving psychics, and by Venice itself.
.
The Eclipse carries with it more than a whiff of hope; Don't Look Now does not. Also unlike McPherson's film, Roeg's is relentlessly stylized, and the oppressive atmosphere of doom is close to relentless. Where Farr seems to reach some sort of level ground by not seeking answers, Sutherland and Christie's John and Laura Baxter doggedly pursue an explanation that might bring them closure, or an ability to breathe cleanly again, free of the mourning that chokes them. What it brings them instead is unimaginable horror, a fresh kind, that leaves one of them spending their final moments of life gasping and gawping like a beached fish, and both of them further away from peace than ever before.
Posted by bill r. at 3:09 PM

I like how you choose to contrast THE ECLIPSE to your Collection Project selection becaue you couldn't really find a point of intersection between the two. This is just as valid an approach as the more typical comparison angle.

I love DON'T LOOK NOW and I wonder if you've ever seen Schrader's THE COMFORT OF STRANGERS which bears more than a passing resemblance to the Roeg film. I think it's based on a novel by Ian McEwan, and I wonder if he was inspired by Roeg or if Schrader made some changes to McEwan's story in order to pay homage to Roeg.

Thanks, Tony. I have seen COMFORT, but it's been a long time. I read McEwan's novel more recently, though, and it didn't seem to diverge terribly much from what I remember of Schrader's film (which I'd dearly love to see again).

In any case, if you're going to set a Gothic story in Venice, and you're doing so any time after Roeg's film, I think it would be close to impossible to avoid being influenced by it. Whether Schrader was conscious or explicit in that regard, I don't know, but I'd bet it was on his mind.

Also, thanks for commenting! I thought I was talking to myself.

A story "in which the horror... appears intermittently, almost as a subplot" is something I've been wanting to see for quite a while, so I'll definitely add this to the queue.

I just finished reading Peter Straub's "Ghost Story", and thought the first half did that beautifully and then, like so many others, it devolved into "fight off the monster" at the end. This is a chronic problem of the genre---as Stephen King says, "Oh, it was just a ten-foot bug! That's not so bad." I guess what one would want from such a horror movie is what DON'T LOOK NOW delivers---an ending that isn't based on taming or suppressing the original disquiet, or even fighting it at all, just this particular expression of it reaching some kind of conclusion.

Did you see Larry Fessendern's WENDIGO? That's another great example of an movie where the supernatural elements are there to support the characters' story rather than take it over. Plus Patricia Clarke is incredible in it.

This whole idea, of horror as a background element, is something that is not completely unheard of in short fiction, but I'm not sure I've ever encountered it in a novel. That's the real challenge, still. I've never read GHOST STORY, because the Straub novels I've read tend to, as you imply, start strong and then devolve. They're so much more interesting than most horror novels, but still lack follow through. Plus, he can be a bit ponderous.

Also, yes, I've seen WENDIGO, and even thought of it vaguely while writing this post, but it's been too long (and I don't own a copy for reference) for me to be able to say anything of substance about it. But yet, if memory serves, it does bare comparison to THE ECLIPSE, even though I don't believe WENDIGO worked for me as well as it did for you.

Straub's pomposity actually works quite well for a novel about a bunch of old guys in New England (and two of them lawyers). But yes, when the gears start turning towards the climactic battle, everything gets less engaging. I think the problem is the whole notion of the climactic battle---as soon as you turn an abstract fear into a concrete entity, you create the hope that said entity can be vanquished, and the fear along with it, which is the opposite of what horror should mean (but exactly what it too-often does).