The Collection Project: Not Death, but Love

.
Early in Mad Love (d. Karl Freund), an audience is seen watching Yvonne Orlac (Frances Drake) performing in a Grand Guignol play, in which she appears as "The Torturee". This crowd is there to hoot at the wild, over-the-top grotesqueries of what happens on stage, but one woman finds it all too horrible, and buries her face in her husband's shoulder.
. 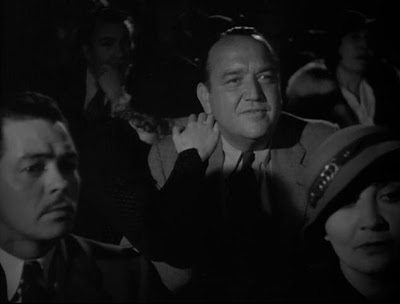 Because the play is not being taken seriously by anybody else, nor was it intended to be, the woman's emotions are found to be amusing by her husband and by the people around her.. 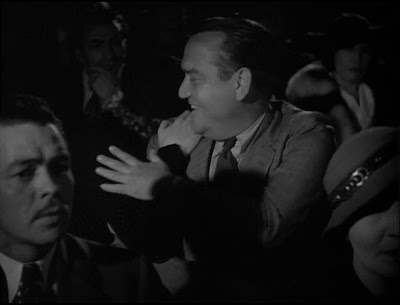 Later, Freund will imply that Yvonne Orlac's "Torturee" has been burned by a hot poker somewhere below frame, as it were, and Peter Lorre's obsessive Dr. Gogol, in his usual box seat at the theater, reacts in a way that implies he wishes he were that hot poker. So who's reaction makes more sense: the woman, or her husband? Mad Love will continue on to reach heights of high Gothic absurdity -- which I mean as a compliment -- that might elicit from its viewers the kind of hoots that most of the Paris crowd was directing at Yvonne Orlac's play, and those hoots will have been anticipated by the filmmakers. It will also present, in Lorre's Gogol, one of the truly unique and most unnerving characters in horror films. 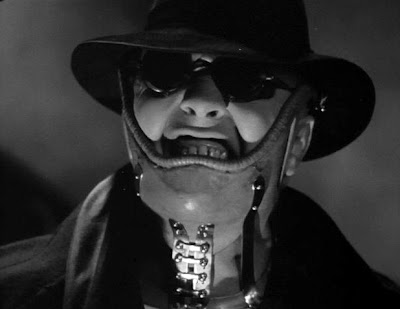 All of which makes the choice to drop that shot of the woman cowering against her husband an interesting one. I've mentioned before my interest in horror movies and literature that explore the genre itself as the source of our unease. I can't quite twist Mad Love into enough knots to make it that kind of film, but the woman's disturbance, and the way it differs from the rest of the audience, isn't there for no reason.

As a genre, horror, at least on film, has devolved into something that we're not supposed to take seriously, and to shrink from it (never mind actually objecting to it) is met with anything from mild to severe derision. Or gentle patronizing, which is what the woman's husband offers her. None of it's real, he reasons, and besides that it's all too absurd. He thinks this while overhead a small bald man with protruding eyes who has never experienced love is having his warped headspace filled with the theatrical images below, images that will keep him going until they're taken away. At which point he'll begin to bust loose.

Taking things seriously, no matter how absurd they are, is not always such a bad thing. While I may not share all the same cultural tastes as her, it seems to me that the woman in the audience has a pretty healthy aversion to simulated torture (when you get right down to it, what is there to enjoy in such a spectacle?). Perhaps she's experienced enough real-life horror, or at least ordinary human unhappiness, to not want to seek it out in fiction. Perhaps her reasons are her own. Or perhaps it's the lack of horror in the rest of the crowd, less than what's on stage, that really makes her cringe.

Pull yourself far enough back, laugh in death's face too long, and you might find yourself like Rollo (Edward Brophy). Guilty, remorseless, and facing the guillotine, all he can muster by way of emotion is an admiration of the blade that will soon remove his head from his body. Push yourself far enough back from feeling anything -- because it's not real -- and that remove can extend beyond the theater, and fiction. Soon you might find it useful to apply this distance to strangers. Then to acquaintances. It becomes easier to act only for yourself. Then it becomes easier to intentionally act against others. And the distance broadens to take in friends, family. Finally yourself. Nothing matters. It's all so absurd anyway. Your body's not even your own. Soon it's as if your hands were acting of their own accord. 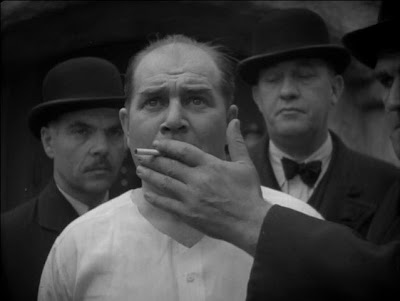 Great observation on a great film. Puts me in mind a little of your (also excellent) NO COUNTRY post. I've increasingly found myself over the years sitting in theaters with people who find stuff that moves/horrifies me to be chuckle-worthy or downright hilarious. Now I've laughed at some awful stuff on screen, but it's because of tone (a la early Raimi) or overwhelming ineptitude in execution. Now maybe my fellow theater goers are seeing ineptitude where I see craftsmanship, but it happens far to often and, frankly, I think my cinematic acumen is a little sharper than that. Cue old Carlin joke- "Ever notice how everyone who drives slower than you is an idiot and everyone who drives faster than you is a maniac?!?!"

I think there are a few reasons for this phenomenon. For starters, ironic detatchment is just a really easy default setting for gliding through life. For seconds, a lot of people just don't take film- or any art for that matter- all that seriously. They just don't let it in. But I think a really big one is that a lot of people are terrified of being the woman in those screengrabs- the one who's showing vulnerability and empathy while all the cool kids are laughing. Maybe this is exacerbated by the way it's increasingly easy for each of us to feel that our existence is mediated and we're constantly on stage in the movie of our own life.

And maybe I'm making a series of broad generalizations based on anecdotal evidence, first principles posited by no one but me, and pop psychology. This is also possible.

Finally- did you ever read Harlan Ellison's piece on being horrified to the core while an audience he was in laughed uproariously at the violence in THE OMEN? I remember it being a mite hyperbolic (see above re: written by Harlan Ellison) but an interesting read.

otherbill - Thanks. I don't know if your theories about why people react to this stuff with laughter or indifference are sound, but I do know that when I hear people say, as I have, that when they saw THE EXORCIST for the first time, they just laughed, all I can think is "Um...okay."

I like your theory that they don't want to look like the woman in the audience. Maybe it's just a generalization, but it sounds good, at least.

However, I think this is more likely the case, because it's a more observable truth:

"For seconds, a lot of people just don't take film- or any art for that matter- all that seriously. They just don't let it in."

Also, yes, I've read the Ellison piece. "The Thick Red Moment", I believe it's called. Very hyperbolic indeed -- I take most stories about that kind of audience behavior with a grain of salt -- but still interesting, and it's not as though, however much he exaggerated his experience, he wasn't talking about something that actually occurs.

Great post, Bill. This film really is unsettling and squirmy and strange. Yeah, it's also so over-the-top that it's easy to fall into a reaction where you're not really taking it seriously, just enjoying the crazy ride, but there's no denying that it also deals with some very charged ideas and themes in a surprisingly direct way. I think it's a shame that so much of the discourse and response surrounding modern horror seems to have moved away from that, but then, as otherbill says, that indifference to deeper subtexts extends far beyond the horror genre. The exaltation of irony above all makes it harder and harder to express genuine emotion, genuine revulsion or sadness or fear.

The exaltation of irony above all makes it harder and harder to express genuine emotion, genuine revulsion or sadness or fear.

Yes. That's why I always cringe whenever a critic -- particularly a smart one -- complains that a given artist or film has "no sense of irony". That is not, in itself, a bad thing. It can, in fact, be a wonderful thing, but it's too damn rare these days.

That is a fantastic set of observations; makes me wonder if Mad Love isn't less minor than I've thought it to be.

This was a fantastic piece. I don't have much to add but bravo!

Now to make a liar out of myself, I don't feel I have much to say about the violence in the media debate. I'll just say that as someone whose pretty blase about onscreen violence, that when something does crack through the shell, its apt to do it with greater force.

Just for example, I've upteen trillion horror movies in the best ten years, but the only new release during that time that actually scared me (as opposed to make me jump) is The Strangers. As a result what do you suppose the number one movie I have arguments with people defending is?

Something similar happened to me reading David Peace's 1974, which despite all the Ellroy, Lehane and Vachs I've read took me places I genuinely wasn't prepared to go.

Like I said, I don't know if this is good or bad, I'm just noting that when something does break through my rather blase reaction to violence and fear, I'm now apt to brood on it for months, maybe even years, then when I was getting bothered by everything coming down the pike.

Maybe its just a function of rarity.

Thanks, Fuzzy. You should definitely see it again, as far as I'm concerned. If nothing else, there's nothing minor about Lorre's performance. He's simply extraordinary.

Bryce - Understand, I'm not saying that I myself curl into the fetal position any time I see on-screen violence. Most of it rolls right off me, too. But I'd like it to have more impact than it usually does. Not necessarily because it reaches new heights of explicitness -- I'd prefer that not be the case -- but because the filmmakers make it matter for once, give it weight, make it hurt.

I can't say THE STRANGERS quite got their for me. It came close, but ultimately I thought the filmmakers had forced the situation to reach that point, rather than naturally unfold that way.