Insects are terrifying creatures. Or so they appear. Throughout recorded history, when faced with any species of insect at all, men -- and especially girls -- have regarded these tiny creatures with abject horror and maniacal violence. Why is this? Freud would say that it's because men and women regard insects as their own malevolent genitals, sprung from our collective ids, or "superegos", and bent on exposing our homosexuality to our parents. But this is only part of the truth, the other part being that insects are often pretty wicked looking. Personally, I find it disgusting that eight or nine years, depending, into this new millenium, mankind still judges the animal kingdom by its appearance, and it is my hope that, today, I can change our perceptions of the insect world. I want to turn our terror and disgust into joy and delight, our stomping and crushing into hugs and laughter. And I've studied all this shit, too, so if anybody can pull that off, it's me.

Insects can be separated into three broad types. Those are Ants (which includes ants, beetles, earthworms, and millipedes); Scorpions (which includes scorpions, snakes, and alligators); and Flies (which includes all flying insects, such as bats, and all the beetles that don't count as ants). Each of these types contribute something positive to our daily lives. Ants, for example, eat all our grass. Scorpions keep the natives at bay, and provide poison for our spear- and arrow-tips. Flies gives our hard-working scientists and engineers ideas for future individual flight packs. Think about how you might one day be able to buzz your way to work like the care-free housefly, and the next time you go to squash one, I think you might find yourself thinking twice. Also, bees are flies, and bees give us honey. Honey is great. It's so good.
.

Now, let us look at each type of insect. First, Ants. Ants are the kings, literally, of the Ant family, and there are three main kinds. The most famous and best kind of ant is the Black Ant, pictured below: 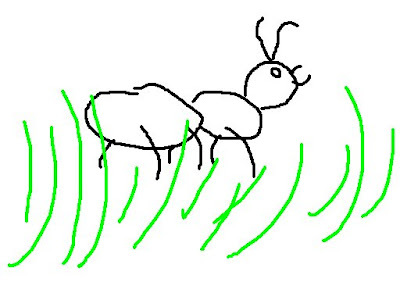 Black ants are the wisest of all insects, teaching all their minions how to hunt and fish, build homes and plant crops, even to carry items that weigh 1400 hundred times their own weight, which is hard to do, if you've never tried it. Think of it like this: You weigh one pound, okay? Now try to pick up a refrigerator that weighs 1400 pounds. That'll mess you up. And yet black ants can do it like it's nothing. Do you have any AAA batteries lying around? Go pick one of those up. See how easy that was? Okay, a black ant would find it just as easy to pick up something that weighed 1400 times that, or right around there, anyway. And yet we crush them under our boots every day!
.


Red ants are often believed to be the natural enemy of the black ant, and in some ways that's true. Before I explain why, let's take a look at a red ant: 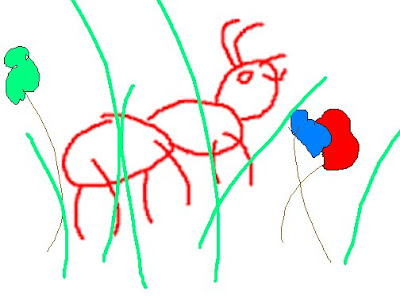 As you can see, red ants spend a lot of time around beautiful garden flowers, and, frankly, black ants wouldn't mind a little of that action themselves. So why not just do so, you might be asking, if black ants are the kings of insects? Because, hey, Einstein? How is a black ant supposed to blend in with beautiful flowers? How many black flowers have you seen? Not too many, I'll bet. But red flowers are all over the place, aren't they? So red ants can scamper amongst them as they please, while the black ants have to sit in the goddamn dirt, saying "You know what? Fuck those guys. Flowers are dumb." Sometimes this sort of denial works, but just as often it doesn't, and on those days, jealousy reigns, which in turn leads to those red ant/black ant fights you used to see in your backyard when you were a kid. That shit was nuts. At the time, you probably wondered what in the world red ants and black ants could possibly find to fight about. But now, thanks to me, you know that it's because of flowers.
.

Next we have blue ants, seen below:
. 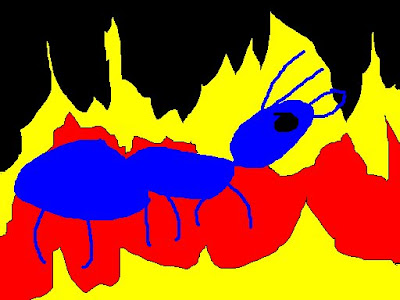 In all honesty, you really probably should steer clear of blue ants. Those are some really bad motherfuckers. And if you see one -- and God, those things are everywhere these days! -- do not try to step on it. Being cast into the deepest caverns of Hell would feel like sinking into a warm bath in comparison to what that blue ant would do to you.
.

On the other hand, every insect in the Scorpion category would make an excellent pet, should you ever wish to take your life in that direction. Humans who keep scorpions as pets are often looked down on as freaks, "weirdos", losers, terrifying loners, the kind of guy who puts up websites that claim that Stephen King is the one who shot John Lennon. And that's all true, as often as not, but why blame the scorpion? Look at him: 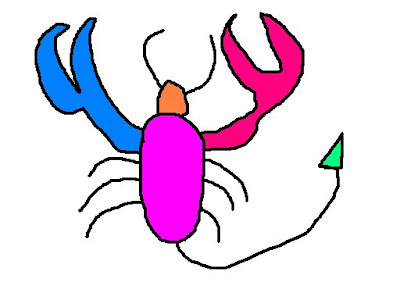 Isn't he beautiful? He's like a poisonous, scurrying little box of crayons. And his poison, so called, actually isn't poison at all, but a natural antibiotic that can be used to treat any number of infections. You don't even have to kill the scorpion to get it -- if he sees that you're not feeling well, he'll offer it to you. But actually, that particular type of scorpion is extinct. Most other scorpions really are pretty nasty, and I wouldn't get within ten feet of one if you paid me twenty dollars.
.

Finally, we have Flies. Most humans consider flies, and other such creatures, to be the most aggravating of all insects. They fly around your food, bite you when you're outside, get all up in your face...but they mean nothing by any of that behavior, and most times they're pretty embarrassed about how everything went down. If we only shared a common language, we'd probably develop a pretty emotionally and intellectually satisfying relationship with them. As it happens, scientists, God bless 'em, are working right now to try and manipulate the vocal chords of humans, and the auditory senses and sensory communication capacity of flies, so that this beautiful dream can one day become a reality. We might be there right now, if it weren't for a tragic, yet fascinating, setback. About a week ago, a scientist named Dr. Leonard Barclay (pictured below) isolated himself in a Science Chamber with a lone housefly. 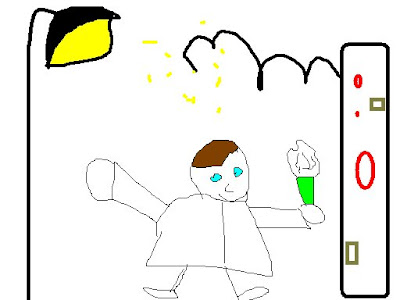 Dr. Barclay surrounded himself with lab equipment and potions -- everything he thought he might need to communicate with the fly. The potion (which was green) was intended, upon Dr. Barclay's consumption of it, to act as a conductor between one kind of lab equipment and Dr. Barclay, but unfortunately, like most science potions, it was full of sugar, and just as the scientist was lifting the beaker to his lips, the fly dove in. 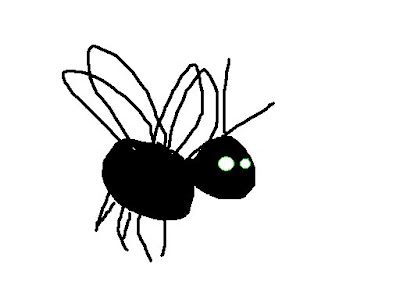 If the potion hadn't worked, there probably wouldn't have been a problem. The US government would have been down one housefly, but that's about it. Unfortunately, science once again "succeeded", and disaster enveloped Dr. Barclay in its icy cloak. 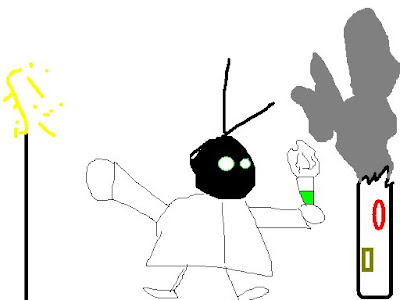 Needless to say, as soon as Dr. Barclay's colleagues could get their hands on a flamethrower, they burned him to ashes, because who wants that thing running around. But the potion works, which is the bright side of this whole deal. We are one step closer to being able to talk to flies. Thank you, Dr. Barclay.
---------------------
So ends tonight's lesson on our insect friends. I hope you've learned as much as I've tried to teach you. If you take away nothing else from this, please remember one thing: insects are beautiful. As beautiful as the hottest, most beautiful woman. But the thing is, insects aren't going to make you buy them dinner first! Right, fellahs? No, but seriously, don't kill insects if you can possibly avoid it. I mean, come on.
Posted by bill r. at 11:04 PM

Krauthammer - Thank you. You are a beautiful angel.

Ryan - I spent a lot of time on those pictures. Currently, as an artist, I'm in my "photorealistic" stage, so I went out into nature and sketched these insects from life. It was quite a spiritual time for me.

Bill, I think that spirituality carries over to your audience--- looking at those exquisite paintings was almost an out-of-body experience. It details nature from the cosmic and micro-cosmic point of view, and has made me realize that we are all one: mind, body, and spirit.

Indeed we are, Ryan. Indeed we are. In fact, while I was sketching the ants, I felt as though they were speaking to me. Not with their mouths of course -- LOL! -- because let's be serious. No, they spoke to me, I believe, with their souls. And they said, "You must speak for us. You must carry a message of peace and unity to your human brethren." And that is what I've tried to do here.

Insects scare me. Greg says that is stupid and I should not be scared. He says, "It's just a bug, moron," before he squashes it and says, "God, Jarvis, why are you such a loser?"

I do not want to offend Greg so I am happy that I found this. Your beautiful pictures of insects have allayed all my fears of them and now I can tell Greg that I am no longer afraid of insects thanks to Bill. You are wonderful but I admit I am not gay for you like Krauthammer. Thank you again.

Thank you for stopping by. I'm glad that you no longer fear insects. You've warmed my heart today. However, I remain concerned about you. Insects cannot harmm you, but do you know what can? Abuse. Abuse meted out by a deranged and drunken lunatic who would rather you remained in your box all day than go outside and live your own life.

I worry about you, Jarvis. Every day. Please don't hestitate to contact me the next time Greg hits you. And he will do it again.

I wave my flyswatter in your general direction, Dr Billy. Insects r not hour friends. I would not PETI a fly for all the nectar in azaleas everwhere. I prefer to eat flowers and curse red ants, who are nto the king, I am. Oops, oh, never mind that. Where's my hill....help.

Holy shit, you guys. Marilyn is an insect!!

This is hilarious stuff, Bill. I am jealous.

No. I am more than jealous. I am outraged that you can write this hilarious stuff.

No. I am more than outraged. I am inflamed with a white-hot inflamed-ness that you have the talent to talk about insects in such a jejune, yet informed, way.

This is hilarious stuff, Bill.

Thank you, Rick. I wish you weren't so white-hottedly mad at me, though. Alls I wanted to do was teach you about bugs.