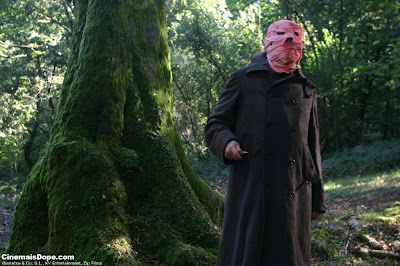 There are, essentially, two kinds of stories about time travel: in the first kind, one or more people go back in time and kill a bunch of cattle rustlers or black knights (or, if they're travelling back to our time from the future, they're trying to stop air pollution from destroying the universe, while taking a moment here and there to marvel at these marvelous ancient foods which we call "pizza" and "snack chips"), and then have to make it back through the wormhole before it's too late. In the second kind, the time travel paradox comes into play, and certain actions taken by the time traveller in the past affect the future as we know it, usually adversely, and things have to be fixed by travelling through time again, and then you have more than one time traveller running around, each with a different agenda, and one of them is trying to stop Lincoln from being assassinated, but the other one knows that if that happens then by 1982 America is under water and England is being tyrranized by self-aware android revolutionaries. So way to go, First Guy, your intentions were good, but now look what's happened.

The first kind of story uses time travel as a means to an end, but the second is actually about time travel itself, and is therefore, to me, inherently more interesting. Nacho Vigalondo's 2007 film Timecrimes -- and I know that title sounds like it belongs to a Sci-Fi Channel Original Movie, but oh well -- is a time travel paradox film, and it's a refreshing curiosity right out of the gate, in that it clearly was made for very little money, and didn't need to be made for any more. Like Shane Carruth's earlier time travel paradox film, Primer (which, I'm going to admit right now, utterly baffled me), Timecrimes is a science fiction film that is about a concept, and Vigalondo gets around the problem of all those expensive bells, whistles and light shows that jack up the budget of movies like I Am Legend by realizing that they don't matter. The time machine in Timecrimes looks like a round sunken bathtub, over which fits a very heavy lid. The time travel special effect itself consists of a very cheap light and camera trick that is exactly as effective as it needs to be. 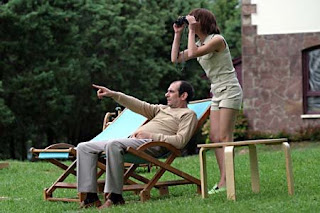 To summarize the plot of this film -- stopping, as is customary, before we get into spoiler territory -- is very simple. One day, Hector (Karra Elejalde) is home with his wife, Clara (Candela Fernandez). For a while, their day is pretty uneventful, save for one odd phone call, until Clara leaves to run an errand. At the time she leaves, Hector is sitting in their backyard, looking into the trees with his binoculars. While doing so, he sees a woman take her shirt off. Curious, he enters the woods to investigate, and finds her completely nude, and either unconcious or dead. While approaching her, a man with bizarre, pink-stained bandages attacks him and stabs him in the arm with a pair of scissors. Hector runs from the man, and soon finds himself in what appears to be a house, mixed with an office building, mixed with a laboratory. A short series of events leads him to a young scientist (Vigalondo), who tells him he can hide out in what turns out to be, but which Hector doesn't realize is, a time machine.
. 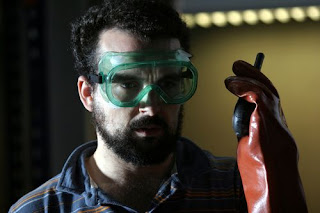 And we're off. It's a curious aspect of these kinds of films that the more effective -- and the more fun and suspenseful and involving -- they are, the less sense they seem to make. Because at the end of Timecrimes, I had two questions. One was "Well, but how...?" and the other was "Except that...no, but what about...?" Also, Hector makes one very big decision towards the end that, while I understand his motives, because he can have only one, I have no idea quite how this decision is going to bring about the outcome he wants. But I guess that's why they call it a "paradox". Or one of the reasons, anyway.

Timecrimes is also quite a dark and melancholy little movie -- as was Primer, if I remember correctly -- which is a tonal approach I admire, because it reveals an unusually high level of empathy on the part of the filmmaker. Vigalondo's imagination is such that he's able to look at this story and say "Look, I know this is absolutely impossible, but if it were possible, wouldn't it be awful??" And I like that. I like art that takes the impossible and treats it not as a game or a gimmick, but as its own kind of reality -- the kind that exists on the page, or on the screen. The only severe hiccup I felt while watching the film was when I figured out a big plot twist at the exact moment the story element was introduced (which I don't point out in order to brag about it, because given how this point is introduced, and knowing what kind of film Timecrimes is, it's not hard to see the twist coming) and felt that the movie would have no surprises left. This turned out not to matter at all, because Vigalondo's film may not work on the plot level, and it may not actually even make any sense on that level either (then again it may -- it'll take at least one more viewing before I can answer that) but it sure works as a movie, and it reminded me how gripping and fresh the most shopworn of stories can be when the storyteller actually gives a damn for once.
Posted by bill r. at 10:05 PM

Bill - Nice write-up. I'm not always a fan of time travel movies for all the reasons you cite at the beginning of the post. I'm glad you brought up Primer, which baffled me so much the first time I saw it that I actually had a rather bad headache leaving the theatre. And I saw it at Ebertfest where Carruth was there to talk about it and presumably clear up some questions! But, it was damn intriguing, and that melancholy air you mention is exactly right for the tone. It sounds like this film got it right.

My favorite time travel film is La Jetee, which is a going back in time to get it right film, but also manages to be about what time travel does to the traveler.

Thanks, Marilyn. I found Primer so confusing by the end that now I wouldn't even be able to discuss it with anyone. I have no hold on what happens in the last half hour or so of that film that I can't even form an intelligent question about it. Part of that is obviously due to how long ago I saw it, but still...

I saw Le Jetee in college and like it a lot, which surprised me at the time. I was also surprised at how directly based on it 12 Monkeys turned out to be. I figured 12 Monkeys just used the central premise, but no, it was a bit more than that.

I've got reviews of Primer, La Jetee and 12 Monkeys on my site.

I'll be sure to check those out.

I'm so glad you liked this Bill...I think I know the twist you mean and I had the same reaction, but the film slowly built from there and in the end was wholly successful for me (plot issues be damned).

It reminded me a bit of a collection of short stories by John Wyndham called "The Seeds Of Time". It was one of my favourite books growing up and had mostly time travel stories with different paradox issues. Great stuff.

I really did like it, Bob. The twist problem I had was mainly not a big deal because it was revealed about a half hour after the story element was introduced. Had it been the big stinger at the end, I probably wouldn't have like the movie have as much.

I've never read Wyndham -- he's a big gap in my SF/horror reading. I need to get on that. Thanks for the recommendation.

I gotta check this one out. I've heard good things about it, and your excellent write-up makes it a priority.

In other words, pressure's on!

Fine piece, Bill. I'm going to check it out based on your recommendation.

You're right: Timecrimes is a dumb title; "Before it Rains" would be better.

Thanks, Rick. And you're right, Before it Rains is a much better title. Why the hell didn't they just ask me?

Timecrimes was very well done - smart pic for a first time director re: keeping the cast and settings limited - will be curious to see what the Cronenberg remake is like! :)

A Cronenberg remake? Really? I had not heard that. Now I, too, am curious...